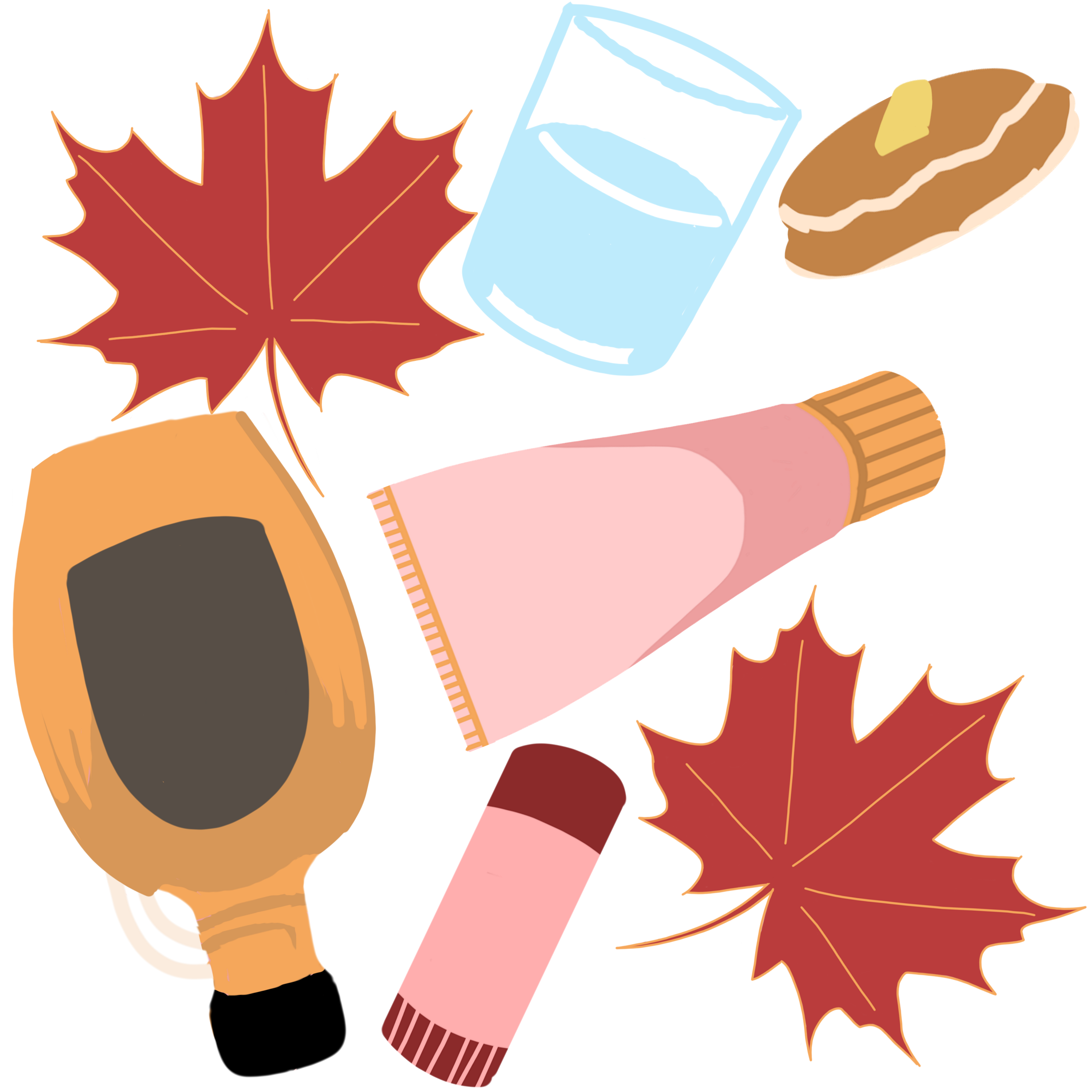 Research labs at URI are discovering the potential health benefits of maple. Graphic by Elizabeth Wong.

The maple syrup you love to put on breakfast foods is more than just tasty; it can also help treat chronic human diseases.

Dr. Navindra Seeram’s bioactive botanical research laboratory in the College of Pharmacy studies medicinal plants and their therapeutic effects against chronic human diseases. This lab is a leader globally in researching maple health benefits, including maple sap, syrup and various parts of the maple tree currently being explored for cosmetic and nutraceutical applications.

Seeram, chair of the department of biomedical and pharmaceutical sciences, is “one of the most highly cited scientists” in his field and has over 200 publications of peer-reviewed scientific papers, according to the College of Pharmacy.

His research focuses on the bioassay-guided discovery of natural products from medicinal plants and their effects on diseases, cancers and diabetes. He has investigated the bioavailability and various other mechanisms of action food components, including maple.

On Oct. 27, the University of Rhode Island’s College of Environment and Life Sciences, in collaboration with its Cooperative Extension, hosted a virtual lecture on Seeram’s bioactive research lab.

The lecture highlighted some of his most profound findings and studies in maple research including maple research applications, polyphenols in maple syrup, the chemical composition of maple syrup and the geographical significance of where maple trees grow.

Seeram noted that Québec, Canada leads the world in maple production, but Vermont leads the United States in production. Seeram accredited this to the geographical region of the Northeast.

“The sugar maple plant and the red maple, which is also used for tap and is Rhode Island’s state tree, are only found in this part of the world,” Seeram said. “We have a very unique climate … this process happens in late winter and early spring when you have a very narrow window of opportunity because of climate change … the combination of having the plants with the temperature is what makes it fit for this region.”

According to Seeram, the maple industry heavily affects the Northeast’s cultural and economic climates.

Seeram explained that maple tap is the largest consumed produced tree-tapped product in our food chain, and it becomes edible once the sap is boiled down to become a syrup.

He described the process of creating sap as “amazing,” and debunked the myth that “maple sap” automatically means an entirely sticky substance because it is 99 percent water. The water is removed in an energy intensive process called osmosis, thus creating the sap we commonly know.

“As you can imagine, sap is moving nutrients from its soil in the roots to get to the plant because it’s going to start to form new buds of leaves as it gets into early spring,” Seeram said. “The plant is moving various vitamins and minerals and organic acids … obviously if you’re boiling [it] down, you’re creating that meek flavor and odor that pure maple syrup is known for, as well as concentrating all the natural constituents you have in sap.”

Seeram also explained the concept of healthy plant foods. He spoke of his team’s hypothesis that beyond sucrose alone, there are other constituents present in maple sap that could import potential health benefits to maple syrup, which are essentially superior to having refined sugar or pancake syrup.

“No one is saying eating maple syrup is going to cure cancer,” Seeram said. “But certainly, the discovery of drug-like molecules from this natural food could then lead to the synthesis of potential new drugs.”

Seeram compared the differences in the diet and accessibility of foods today, to those of ancient men, saying there is a connection between the types of illnesses people get today and the types of food we eat.

“Plants have provided humans with drug-like molecules, pharmaceuticals that you can actually take for diseases,” Seeram said. “Many plants are toxic, but the ones we eat which are composed of lots of colorful fruits, vegetables and grains and their derived products like green tea, red wine and olive oil. Theory data has shown that if humans eat a plant-based diet they can certainly reduce the risk of getting certain types of cancers and heart diseases.”

Seeram hopes to increase awareness of maple product benefits to help the regional sales of it, working closely with different organizations and research labs to communicate and translate maple’s positive effects. He also believes that right now with the COVID-19 pandemic, people are turning more to plants to boost their immune system for anti-viral prevention, which is why these studies are increasingly important.