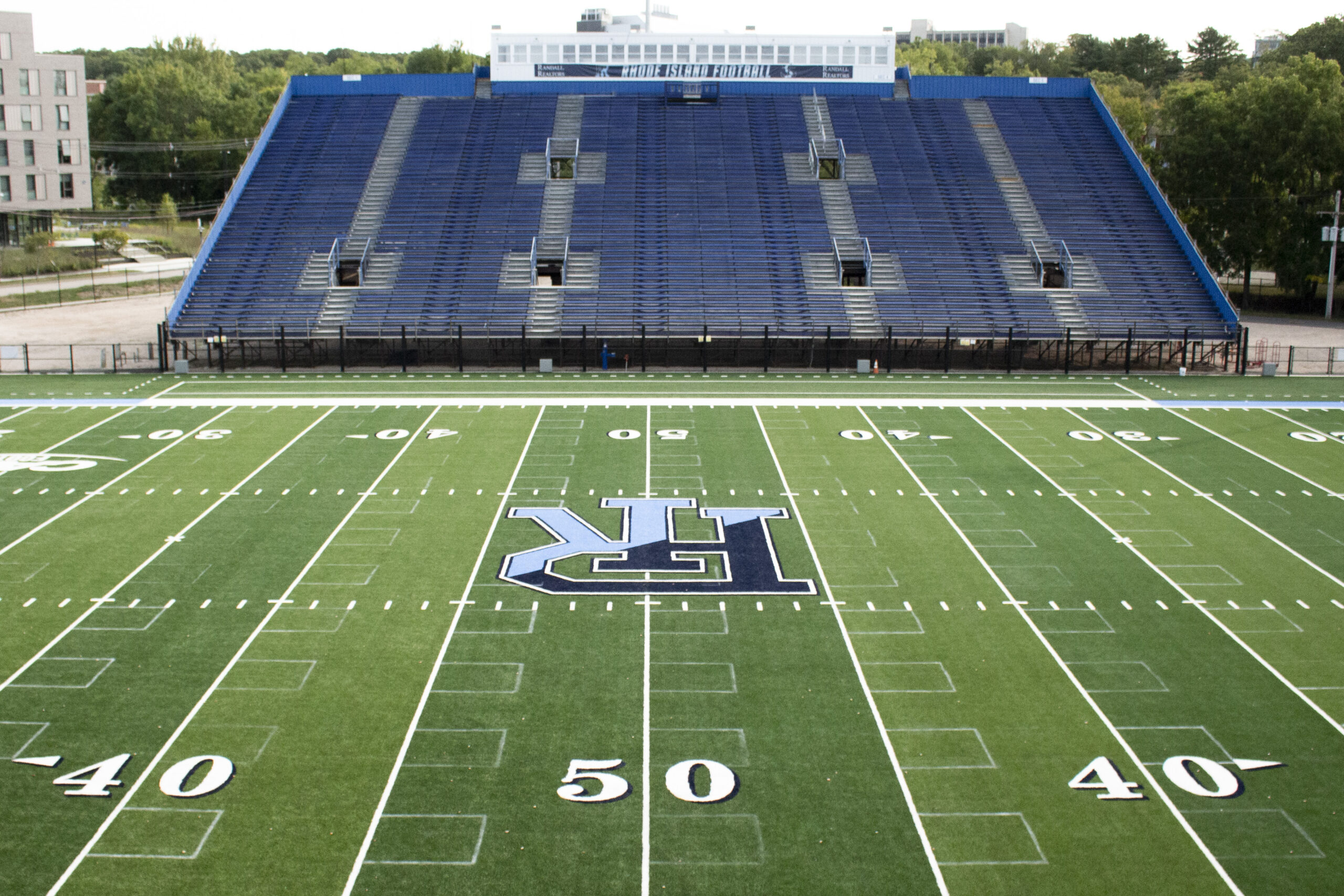 At long last, Meade Stadium will welcome back football in the spring. Photo by James McIntosh.

It’s unknown at this point if the Meade Stadium bleachers will be filled this spring, but at least the field will be.

The University of Rhode Island Football team announced Tuesday in a press release that their seven-game season is set to begin Feb. 27 at Bryant University. The game against the Bulldogs will be the first time the two teams from the Ocean State have played each other since 2002.

Rhody released their six-game conference schedule earlier in the day, highlighted by a tilt against the Delaware Blue Hens in the home opener for the Rams. It’s a repeat fixture from last season that saw the Rams play a night game at Meade Stadium for the first time since 1972. Delaware won that contest in memorable fashion, defeating the Rams 44-36 in triple overtime.

The Colonial Athletic Association (CAA) announced earlier this year that they were pushing their conference football season to the spring of 2021 even though other conferences have forged ahead with football this fall. The league announced along with the schedule to split the conference into two divisions, with the North having seven teams and the South division having four. Towson previously announced they were not playing football this year.

The North is comprised of URI, Villanova, UAlbany, Delaware, New Hampshire, Maine and Stony Brook. Each team will play each other once; three games at home and three on the road. The South, which is made up of Elon, William & Mary, James Madison and Richmond, will see each team play the other in the division twice, both home and away.

“We are pleased to announce the conference schedule for the 2021 spring football season, but understand this is just the next step in the planning process associated with playing football on each of our campuses,” CAA Commissioner Joe D’Antonio said. “Our unique divisional format was developed with the goal of enhancing safety and reducing the risks associated with travel during this difficult period of time, while still providing a fair and competitive model to determine a champion.”

URI’s conference schedule opens up with a bye week. Their first conference game will be played March 13 at Villanova followed by a trip to New York one week later to take on UAlbany.

Three home games follow in three successive weeks, with games vs. Delaware, New Hampshire and Maine to be played at Meade Stadium. Rhody closes out their regular season away to Stony Brook on April 17. Kickoff times have yet to be determined.

According to the press release, the team with the best overall conference record will earn the CAA’s automatic bid into the NCAA Football championship, comprising 11 league winners and five at large-bids across FCS football. In the event of two teams sharing the same conference record, a tie-breaking procedure will be used. The conference has not announced at this time what that may look like.