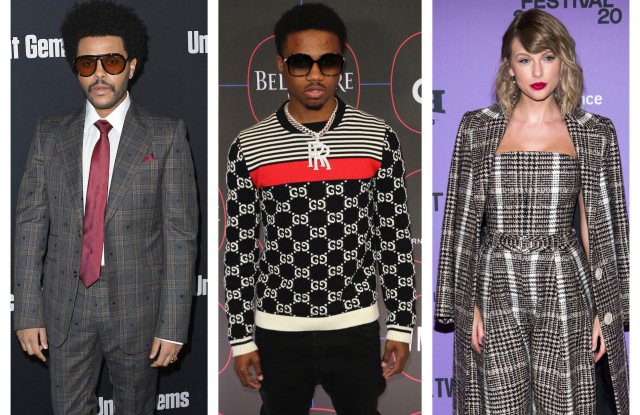 The Weeknd, Roddy Ricch, and Taylor Swift are all nominees for the upcoming American Music Awards. Photo from wwd.com.

It’s that time of year again. The American Music Awards are right around the corner, with its premiere on Nov. 22 at 7 p.m. on ABC. So, who’s going to be the big winner of the night?

The Weeknd and Roddy Ricch are tied for the most nominations this year with eight, and both are up for Artist of the Year along with Justin Bieber, Post Malone and Taylor Swift. Megan Thee Stallion also has an impressive five nominations, followed by quite a few people on the board with four nominations including Taylor Swift, Lady Gaga, Justin Bieber, Doja Cat, Bad Bunny and DaBaby.

Now let’s get into some specifics. We’ll start with Artist of the Year. To no surprise, Taylor Swift and Justin Bieber made the cut. To be honest, I was a little bit surprised by The Weeknd’s nomination, but he does have a lot of nominations this year, so it’s really anybody’s game. Now don’t get me wrong, I love “Blinding Lights” but I didn’t think that The Weeknd would be in a big category like this one.

If I had to make a guess, Taylor Swift is going to bring this one home. Last year at the American Music Awards, she won every single category she was nominated for. With her new album, “Folklore,” out and all the support it has gotten, it will not be a shock if Taylor Swift wins this one, and to be honest, I think it is well deserved.

Another category I think is worth noting is New Artist of the Year. For this award we’ve got Lewis Capaldi, Doja Cat, DaBaby, Lil Baby, Roddy Ricch and Megan Thee Stallion nominated. All of these artists obviously have great hits, “Before You Go,” “Say So,” “Rockstar” and “Savage” just to name a few. I think this is always a really tough category to predict, but I think I have to go with Megan Thee Stallion on this one. With her five nominations this year, she’s the leading female artist in the 2020 American Music Awards nominations, and people really support her. Since the awards are being voted on by fans, I think she could be going home with a win in New Artist of the Year.

When I was looking through all of the categories and nominations for this year, there was one that really caught my attention and made me immediately stop scrolling. Favorite Album – Pop/Rock. The nominees are Harry Styles for “Fine Line,” Taylor Swift for “Folklore” and The Weeknd for “After Hours.” I feel like this one is going to be a tight race between “Fine Line” and “Folklore.” Both albums were both number one on the Billboard charts at one point, and they both received very positive feedback with lots of popularity. Like I said, Taylor Swift is hard to beat, but if anyone can beat her, Harry Styles may just be the guy.

Some other categories that will be announced at this year’s American Music Awards are Favorite Male Artist, Favorite Female Artist, Favorite Duo or Group (I’m secretly hoping the Jonas Brothers win that one; my inner child loves that they are back), Favorite Song and Favorite Soundtrack. There are a lot of new names, and a lot of veterans. Regardless of who wins what, it will definitely be fun to watch on Nov. 22!