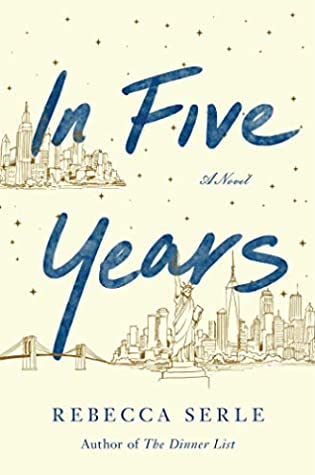 Want to read but can’t find the inspiration to pick up a book? Here are 6 suggestions to respark your inner bibliophile. Photo from goodreads.com.

It’s really easy to fall out of love with reading when all you read are textbooks and class-related articles and essays. But, the best way to get back into it is to pick up a book that isn’t daunting. Books with fewer pages and shorter chapters are always the way to go. So, go grab a fuzzy blanket, your favorite mug of coffee, tea  or hot chocolate and check out these reasonable-length books!

Ever had a plan of exactly how your life would pan out? So did type-A lawyer Dannie Cohen, until she falls asleep on perhaps the biggest night of her life and wakes up five years later. In a different bed, with a different man and a different ring on her finger. Follow Dannie as she makes it back to the current day and tries to forget about that night until she runs into the man she saw. “In Five Years” is a heart-wrenching story about love, loss and letting go; you won’t be able to put it down.

If ever there was a book to sob at, it’s “This Is Where It Ends,” which is told from the points of view of four high school students during a school shooting. The whole book takes place over the span of 54 minutes, each part telling a very different and devastating story for each student. Grab your tissues for this one.

If you’re still obsessing over Netflix’s newest TV series, “Bridgerton,” then the book it’s based on is the book for you. Catch up with Lady Whistledown, Daphne, the Duke and so many more in the eight-book series that will have you smiling just as much as the show did. And don’t worry, the details might even be more vivid than the live depiction (P.S. for all the Antony lovers out there, the second season of “Bridgerton” will follow his love story and is based on the second book of the series, “The Viscount Who Loved Me”). You’ll burn for this one!

“One of Us is Lying” is one of the best mysteries I’ve read in awhile. And if you liked Netflix’s “American Vandal,” then this is the one for you. The book follows five students as they endure the world’s most horrifying detention because only four make it out alive. Follow the remaining four students as they try to get to the bottom of the death they witnessed first-hand, and as they dodge the accusations that come their way. Make sure you clear a few hours to read this one because you’ll be glued to it.

Right in time for Netflix’s adaptation of the third installment of “To All the Boys I’ve Loved Before,” which comes out on Feb. 12 by the way! Lara Jean and Peter Kavinsky have made it through all the obstacles that high school has thrown their way, but college is a different story. Jenny Han wraps the last of this book series with a bow, and I’m not telling you it will end the way you want it to, but it will put a smile on your face! If you’ve only seen the movies up until this point, you haven’t missed much so go grab this last book! (P.S. Han’s “The Summer I Turned Pretty” series was just picked up by Amazon to be made into a series, so check that out as well.)

If you’re looking for something a little more intense, the “My Brilliant Friend” series is the way to go. Originally published in Italian, the books follow the lives of Lila and Elena, two best friends as they grow up on the poverty-stricken outskirts of Naples post-World War II. Watch as they try to overcome their destiny of remaining in the same poor, submissive lives they watch the other women in their town face. However, life leads the two down very different paths. This series is heavy, but worth the read, and the HBO series won’t leave you disappointed either.

Take another crack at reading. And remember, it’s okay not to like a book, or to pick one up and decide not to read it. Try using the four-chapter rule: if by the end of four chapters you’re still not feeling it, don’t be discouraged and try another book.