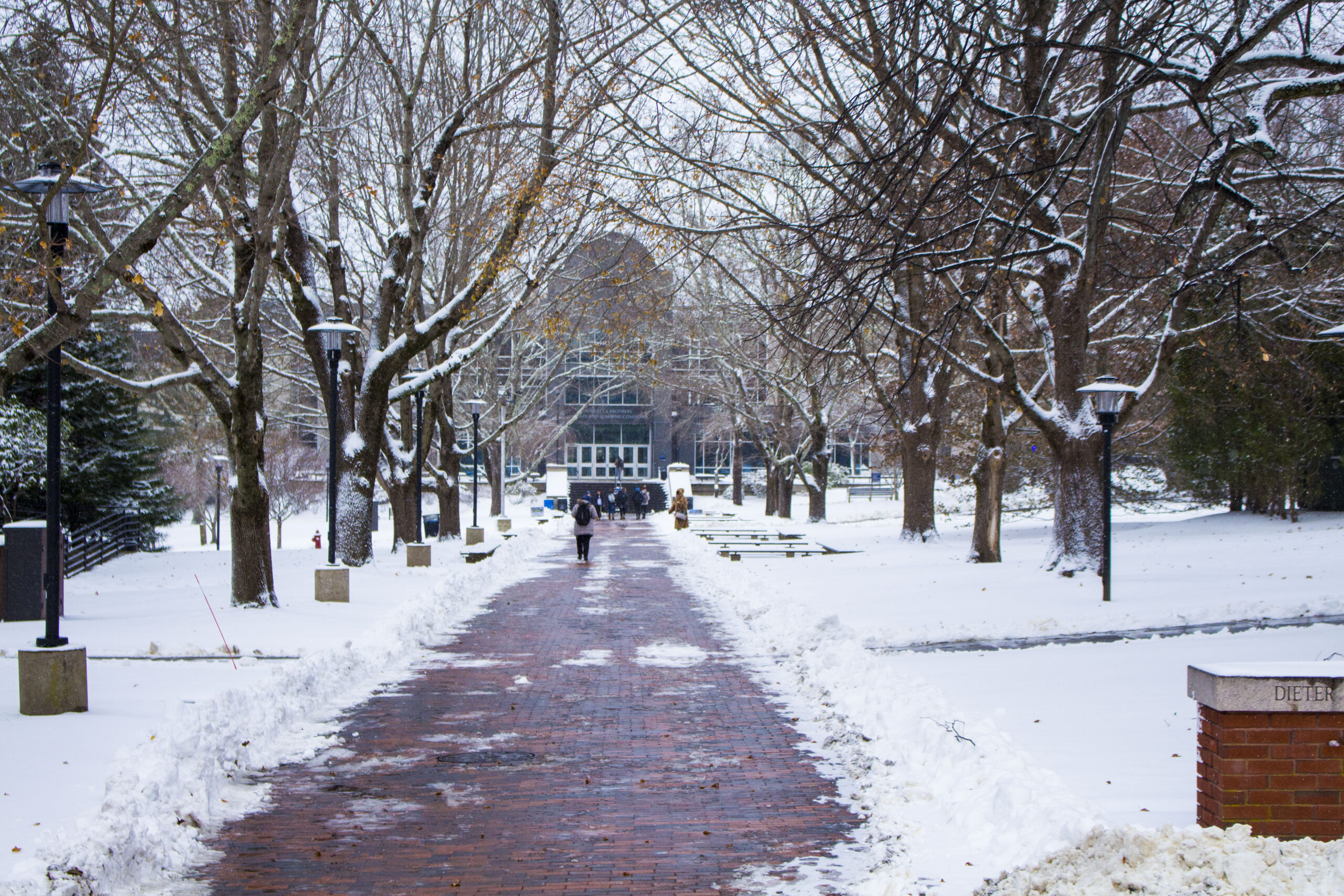 Many take for granted the ability to be able to walk to class without having to trudge through the snow, but just how much work does this take behind the scenes? Photo by James McIntosh.

When piles of snow cover the University of Rhode Island campus, it takes a lot of teamwork, long nights and hard work to get the campus ready for students to get back to class as soon as possible.

If you have ever wondered how the campus looks so clean the day after a snowstorm, it’s because URI maintenance workers spend hours in their trucks with little time for breaks to make the campus ready for students. The combination of the large campus and the heavy snow that hits Rhode Island frequently makes for a lot of cleanup to be done, and sometimes this means working really long hours in an attempt to get the campus open as soon as possible.

“I would say the minimum is four hours, and the longest I have been here at once is about 32 hours,” said Andrew Folan, who has been a URI maintenance worker for four years.

On a normal workday, Andrew works in the rain garden part of campus around the Center for Biotechnology and Life Sciences and the Beaupre Center for Chemical and Forensic Sciences.

Working shifts that last 24 to 32 hours is a task that doesn’t allow for much time for sleep. When the snow hits, there is a lot of work to do, and not a lot of time for all of it to get done.

“We stay around the clock,” Robert Johnson, a URI maintenance worker for 21 years and now a senior gardener for the athletic department, said. “We stay in our trucks the whole time.”

When they have to work overnight shifts, they are provided meals through URI dining.  During their breaks, they head over to the maintenance building before getting back to work again.

On a typical snow day, workers spend their shifts performing tasks such as plowing all of the roads throughout campus, all of the sidewalks, parking lots and also the off site areas like the farms. However, there is also a lot of work that happens before the snow even hits the ground.

“Before the snow comes we do pretreatments to get ready for the storm,” Folan said. “We want to be able to open up the campus the next day. That’s the ultimate goal.”

Clearing the snow from the entire campus is a big task and after the snow hits, the maintenance workers are here for a long time after getting the school prepped for students arrival.

“It’s not over once the snow stops,” Folan said. “We are here for about eight to 10 hours after.”

When a snowstorm is on the way, maintenance workers do get prior notice so that they know when they should be arriving on campus.  The main goals that they want to accomplish when a snow storm hits is to get everyone back to campus as soon as possible, and make sure that the campus is accessible for everyone.

“Our superiors and our management tell us when to come in,” Johnson said. “They watch the weather constantly.”

Cleaning up all of the snow on campus isn’t a quick task. It sometimes calls for staying up all night and spending long hours in their trucks in order to get the campus ready for students.