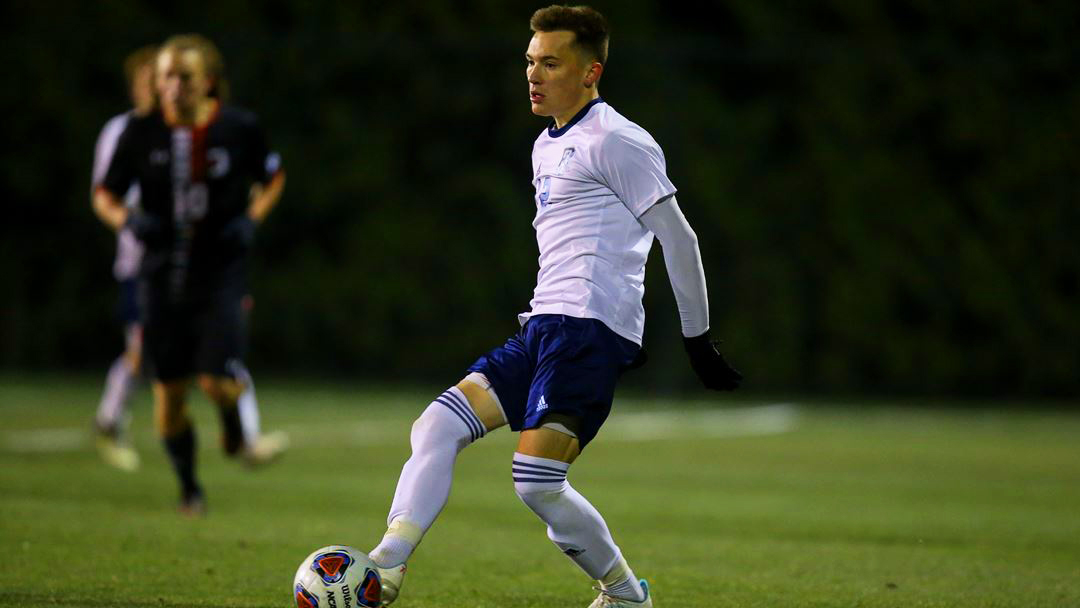 In a season that has presented uncertainty and new challenges, the University of Rhode Island Men’s Soccer team believes they still belong with the best-of-the-best in the Atlantic 10.

“The team goal remains the same every year: win the conference championship and play in the NCAA tournament,” said Head Coach Gareth Elliott.

One of the team’s defining factors this season is their newfound youth. Coming off a season where they won their second consecutive A-10 Championship, the Rams now have a group made up of 11 true freshmen and over 15 new players in total.

Coach Elliott has been impressed with how the group has looked as a whole, calling it a “collective effort” among the team’s new faces as they look to improve throughout the spring.

“When they are freshmen, there is still a lot of development to be required to be at the level we’re looking for,” the 2019 A-10 Coach of the Year said. “Their attitude’s been good. They’re working hard.”

With a roster that is looking to build more experience, defense will be the main focus for the Rams at the outset. Once the team becomes defensively strong, according to Elliott, other aspects of the game will become easier as well.

“With so many new guys, we’re trying to focus on the defensive side of the ball first,” he said. “Hopefully after that, we can figure out how to score a goal or two.”

The circumstances brought on by the pandemic have also created a number of difficulties for the Rams this season. A shortened schedule has left the team well short of the approximately 20 games the program became accustomed to.

Coach Elliott noted that more of an emphasis will be placed on each game as a result of the abbreviated lineup, and that the team will do its best to adjust to both limited practice time and the colder conditions that come with playing in the spring.

This schedule shakeup has even made finding a place to play difficult. With no regularly available turf field on campus, the team will likely have to adapt to an unfamiliar environment as well.

“We don’t even know what fields we’ll be playing on,” he said. “We’re in the middle of trying to find a location for games.”

URI opened their season on the road this past Saturday, falling 4-0 to Providence College. Despite holding the Friars scoreless for over half the game, they were unable to keep up offensively in the second half. Both teams took four shots in the second period, but the Rams were unable to connect on their opportunities.

Overall, this season will provide growth for Rhode Island moving forward. With a young group of players to build around, the experience they get playing this year will be crucial to their success moving forward.

“The more experience they can get this year, the better,” Elliott said. “It’s been beneficial to get one game in, but obviously we’re looking forward to getting more in.”