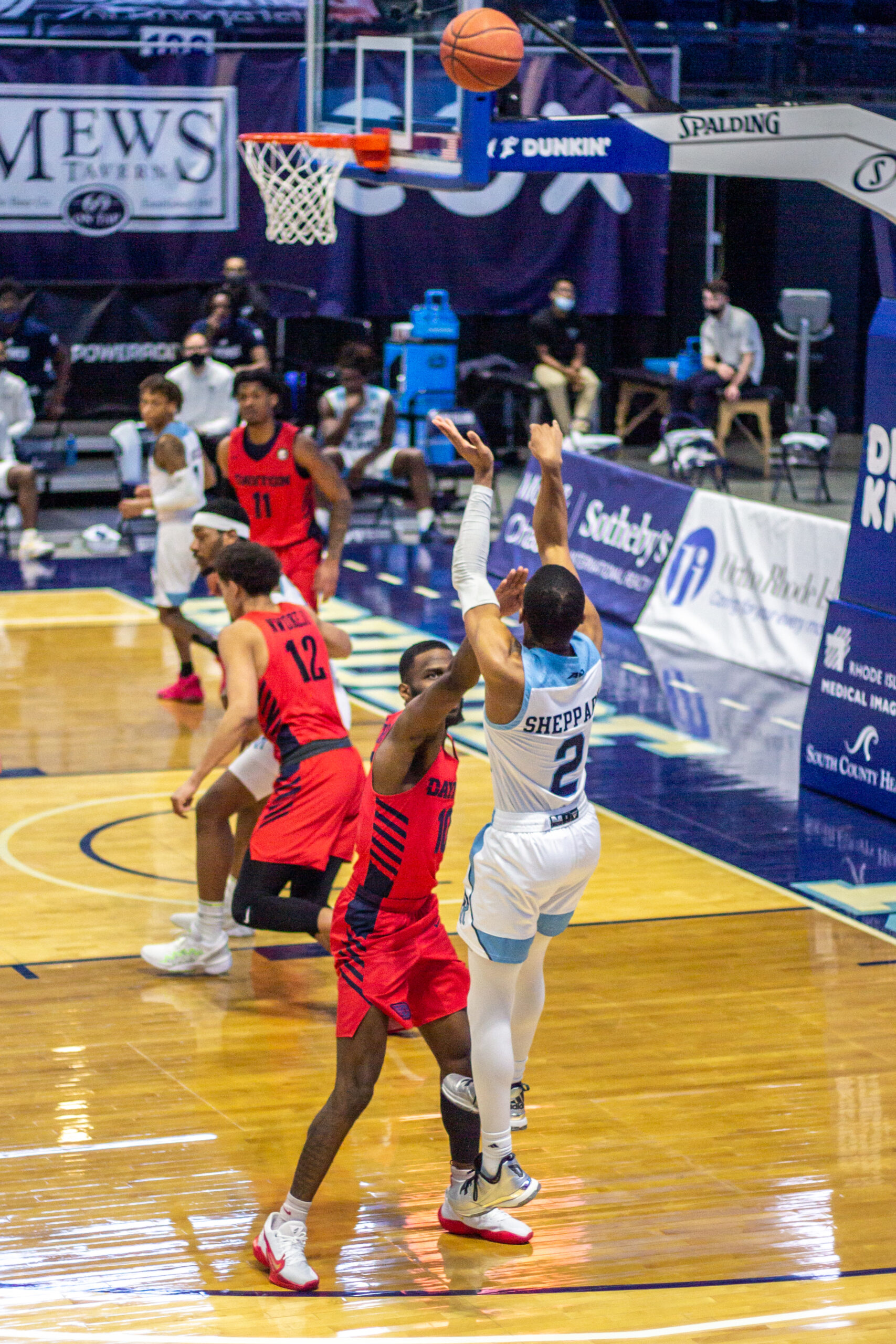 The Rams could never get up-and-running in the 2020-21 season, losing in the 2nd round of the A-10 tournament

In the end, it’ll go down as a disappointment.

That is the prevailing thought about the University of Rhode Island Men’s Basketball season. A season that had so much optimism heading into the year, yet played out just the opposite. Positive outlooks are not in high supply following the conclusion of the season.

URI had their year end in the second round of the Atlantic 10 conference tournament last Thursday in a 84-72 loss to Dayton. The Rams trailed throughout much of the contest, but did cut the deficit to a point with 8:19 to go thanks to an Allen Betrand three pointer. Their opponents then went on an 8-0 run, creating a lead too big to overcome.

Head Coach David Cox acknowledged postgame how proud he was of his players for handling the challenging circumstances of the season, while also taking responsibility for how it played out.

“Our guys continued to fight each and every day, so the onus ultimately rests on my shoulders, not on those guys,” he said. “If there is any finger-pointing in the manner the way this season unfolded for the Rhode Island Rams, I am hoping, particularly in the times we are in, that I get the brunt of that and not these young men who went in really tough circumstances and left it on the line each and every day.”

A combination of factors propelled the Rams to their losing record. A lack of chemistry was evident throughout the year. With just three rotation pieces returning from a year ago, Rhody desperately could have used the practice time to integrate all the new players to the team. However, given that the pandemic limited workouts until classes resumed in the fall, it was a challenge to get everyone on the hardwood at the same time. The lack of familiarity with each other was evident on the court this season, with URI finishing 12th in the conference in assist-to-turnover ratio.

Speaking of the roster, set rotations were hard to come by for the team this season. Coach Cox said before the season that he felt confident many of the players were ready to contribute, and he stuck to that. Eleven players averaged more than 10 minutes a game, and end-of-game lineups were decided by who had the hot hand. All players on the roster had their moments of brilliance, but at times it was unclear if players fully understood their roles.

Last but not least, injuries played a big role in the team’s growth over the season. Transfer Makhi Mitchell only played seven games for the team before going down with a season-ending injury. Jermaine Harris missed the beginning of the season with a foot injury, and while it wasn’t health-related, Betrand was not eligible to play until December.

Injuries had their effect on the final game as well. Jeremy Sheppard missed the Dayton game with a physical ailment, and Betrand was left writhing in pain after landing awkwardly on his leg in the season finale. The transfer from Towson announced on Instagram that he tore his ACL, PCL and LCL on the play, likely resulting in a lengthy layoff.

It is for these reasons, coupled with more bad luck and performances, that led to an unfortunate senior send-off for program great Fatts Russell. The point guard from Philadelphia ended his career by being the all-time steals leader in URI history with 213 and almost had a triple double in the finale against the Flyers. Russell addressed how much the program meant to him after the game on Thursday.

“I knew this was my last time in a Rhode Island uniform,” he said after walking off the floor. “It just kind of hit me all at once. Everything Coach Cox did for me, everything this program did for me. Just my love and my passion for [URI]. Rhody will always be a part of me.”

There still were bright moments for Rhody this season. Coach Cox and his staff deserve tremendous credit for dealing with the challenges outside the game of basketball. Rhody played the most games out of anyone in the conference heading into the tournament, as the team never had to go on pause due to a positive case within the program. Coach Cox also led his group of young men through the racial injustice happening in the country and beyond, frequently addressing the issue to both his team and the media.

On the court, the Rams beat St. Bonaventure and Virginia Commonwealth University, two NCAA Tournament-bound teams who will meet for the conference crown next Sunday. Freshmen Ishmael Leggett and redshirt sophomore Makhel Mitchell noticeably got better as the season progressed, who, along with Antwan Walker, will likely be the cornerstones of next year’s team.

Ultimately though, the 2020-21 season did not live up to the lofty expectations that were set in the last few years. With a program legend walking out the door and another transfer portal rodeo looming in the future, the Rams will have to rebuild and reload if they wish to once again contend for an A-10 crown.