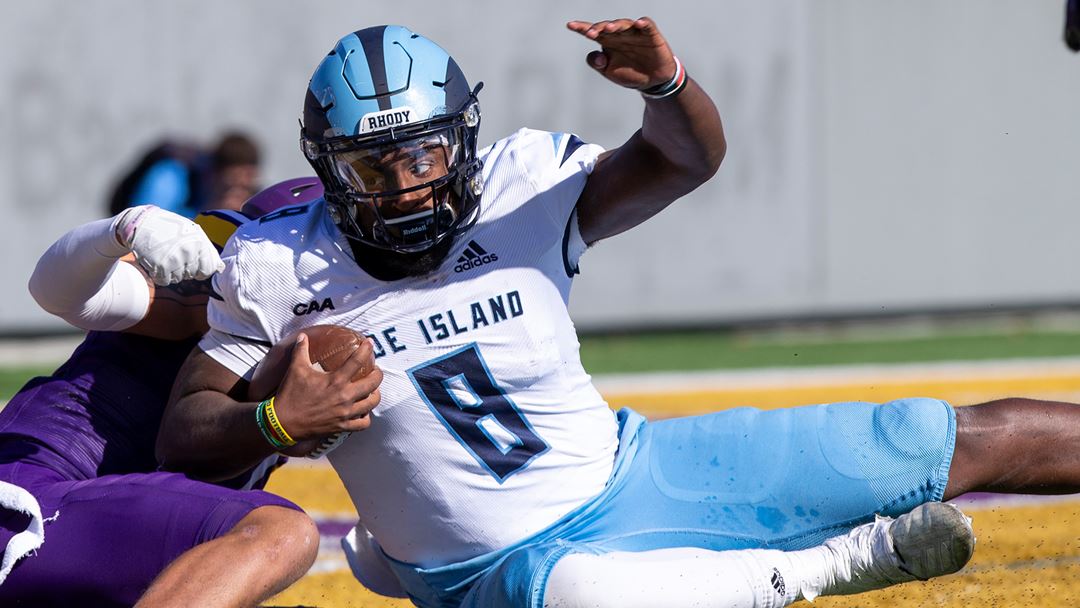 Kasim Hill has guided the Rams to a 2-0 start early on in his Rhody career from – Photo gorhody.com.

Two games into the strangest of seasons, it is already clear that the University of Rhode Island Football team loves to win in dramatic fashion.
The Rams moved to 2-0 on the season with their second overtime win in as many weeks, this time with a margin of 17-10 at the University of Albany. It is the second time in the last three seasons that Rhody has started undefeated in their opening two contests.
After last week’s thrilling 40-37 win over the Villanova Wildcats, it was the defense who proved they could propel Rhode Island to win a tight contest. The Rams gave up a touchdown late in the first quarter off a Mohamed Jabbie touchdown reception, but it was the last time the Great Danes would reach the endzone.
Safety Cody Tippett propelled a stout defense for the visitors. He had two interceptions, including one late in the fourth quarter when Albany was looking to win the game in regulation. His interceptions, coupled with his two tackles, earned him the Colonial Athletic Association (CAA) Defensive Player of the Week honors.
The defensive slugfest contest that played out was welcomed by Head Coach Jim Fleming, who spoke Monday about how tight the game was.
“It was an old-school physical battle,” Fleming said. “Both teams were well prepared. I’m sure both of us will look back at the film and say there were things that were missed that we’d like to have back, but it was a tremendous football game with two tough football teams.”
On the other side of the ball, transfer Kasim Hill continues to be the dual-threat quarterback the Rhode Island coaching staff had hoped for when bringing him into the program. It was a quieter day from the transfer from Tennessee relative to his exploits vs. the Wildcats, but he still threw for 117 yards in addition to his 47 on the ground.
On the first play of overtime, it was Hill who kept the ball on a read-option, escaping to the left for an easy 25-yard touchdown. He added a touchdown in the air in the second quarter, throwing a seven-yard score to leading receiver Ivory Frimpong.
In such a low-scoring contest, special teams are a crucial aspect to grinding out a victory, with the unheralded unit producing a great display for Rhody. Redshirt junior Davey Schaum-Bartocci averaged 43.6 yards per kick on nine attempts, with four of them being downed inside the 20. After one of his punts resulted in the Danes starting on their own two-yard line, three plays later saw the Rams get a safety thanks to a sack by Jarrett Martin. Schaum-Bartocci’s dominant display also got recognition from the conference, with the punter earning CAA Special Teams Player of the Week.
“When you’re able to survive two phases of the game, which for us last weekend was defense and special teams, you have a chance,” Coach Fleming said. “Our punter did an outstanding job.”
With Villanova and Albany being ranked nationally before both encounters with Rhode Island, Saturday’s win was only the second time in program history the team has beaten ranked opponents in back-to-back weeks. The last time that happened was in 2001 with wins over Hofstra and Delaware. The bright start to the year saw the Rams themselves ranked in this week’s STATS Perform FCS Top 25 poll at number 18.
There are new coordinators on both offense and defense for Rhody, and Coach Fleming alluded to how the extended pre-season helped in the transition to a new playstyle.
“I’ve really felt like we have something special brewing,” he said. “We put in a lot of time in the fall getting to know each other. It was probably a blessing in disguise [not playing games], just new schematic things we’re doing on offense and defense.”
Even though the season has started out brightly, tough contests await the Rams in their bid to advance to the postseason. The CAA set a conference record this week with seven teams ranked in the STATS Perform Top 25 poll, headlined by number 1 ranked James Madison. Rhody does avoid a regular season matchup with the Dukes this season though, as both teams are in separate divisions.
This Saturday marks the Rams’ first home game in over 16 months when they take on the Delaware Blue Hens at Meade Stadium, with students expected to be in the stands. This matchup last season was one of the most exciting games in school history, with the Blue Hens winning 44-36 in triple overtime in the inaugural game on the new turf at Meade. Saturday’s rematched is scheduled to kickoff at 12 p.m.