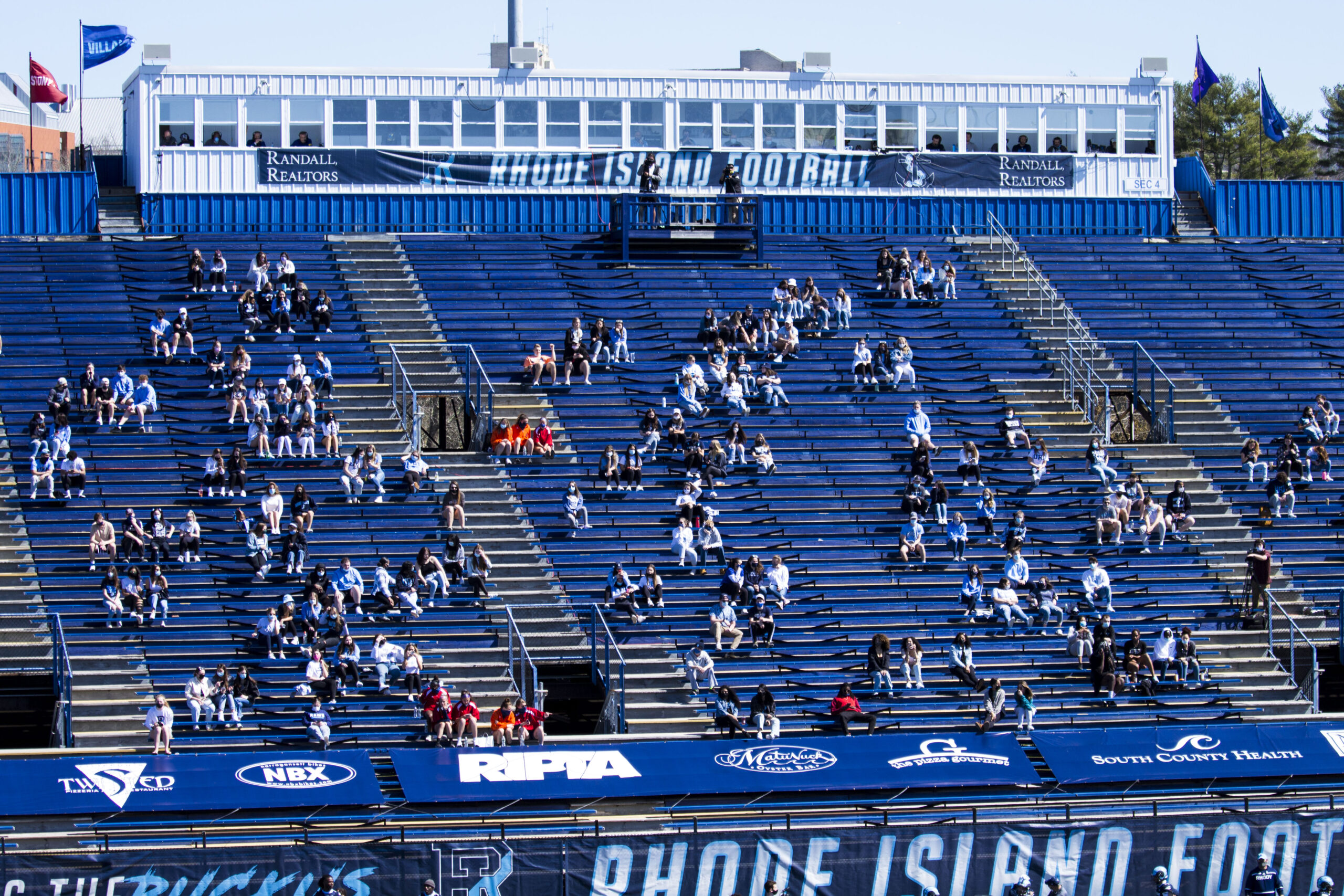 Fans were welcomed back at Meade Stadium for the first time since November of 2019. Photo by James McIntosh

The wind wasn’t the only thing that was roaring Saturday afternoon when the University of Rhode Island Football team took the field against the Delaware Blue Hens. For the first time  in almost a year and a half, fans cheered on their Rams as they hit the turf for their home opener.

In early March, Rhode Island Athletics announced that it would be allowing a limited number of students who are participating in bi-weekly COVID-19 testing to attend sporting events on campus.

This decision came a week after the state allowed on-campus students who meet school testing protocols to attend outdoor sporting events with a cap of one person per 125 square feet, or 40 percent of the venue’s seating capacity.  The University has set its capacity limit at 500 people for Meade Stadium, a significant decrease to the stadium’s near 6,500 available seats.

“[The State of Rhode Island] agreed that it was safe because students had been testing––they come to bi-weekly testing, so it’s a more controlled environment,” Associate Athletic Director and Director of Ticketing Maureen McCarthy said.

Alongside Director of Health Services Ellen Reynolds and Director of Emergency Management Saumel Adams, McCarthy has spent the past few weeks putting all of the protocols together to ensure that everything is as safe as can be.

Students can request one complimentary ticket online on a first-come, first-serve basis via the student ticketing portal for football, men’s and women’s soccer, softball and baseball events on-campus. They are able to put in the request as early as two days prior to the start of the event. In the past, students only needed tickets to men’s and women’s basketball games along with football games, but in order to keep track of capacity, all events will be ticketed.

Once students request a ticket, it will be sent to their email where they can save in their Apple Wallet or GPay and have it scanned at their selected event.

McCarthy said spectators will also be required to adhere to all health and safety protocols, including wearing masks, completing a university-wide daily health assessment and social distancing in the seating and standing areas only. Entrances will also open only 30 minutes prior to the start of a game, and concessions stands will be unavailable.

“We don’t want people sitting in there and hanging out, and there’s more chance for non-social distancing,” McCarthy said.

For football, fans will see the cheerleaders, the Ramettes and the Pep Band at games, but no on-field performances. Saturday saw the pep band socially distance on their normal side of the grandstand close to the Brookside Apartments. The Rammettes and the cheerleaders were seated on the opposite side of the bleachers and close to Coddington Hall, an unfamiliar location for groups that are accustomed to standing near the endzones during games.

Ben Sawyer, a sophomore who attended his first college football game last weekend, was very pleased with the experience overall.

“I’m happy with how easy the process was to get in and it’s a beautiful day,” he said.

In addition to students, a limited number of members from players and coaches’ immediate families were allowed to attend games. For Yolanda Grant and Juwon Grant, the mother and brother of redshirt junior receiver Jahkari Grant, they enjoyed seeing their son and brother in person on the field again.

“It was nice to see a game,” Yolanda Grant said. “We had been missing it, so it was nice to be able to come out and see all the guys and be excited for them.”

With the semester coming to a close and the weather getting warmer, students will have plenty of opportunities to show off their school spirit, meet new people, and possibly, find a new favorite sports team.

Carpool parking not going so swimmingly