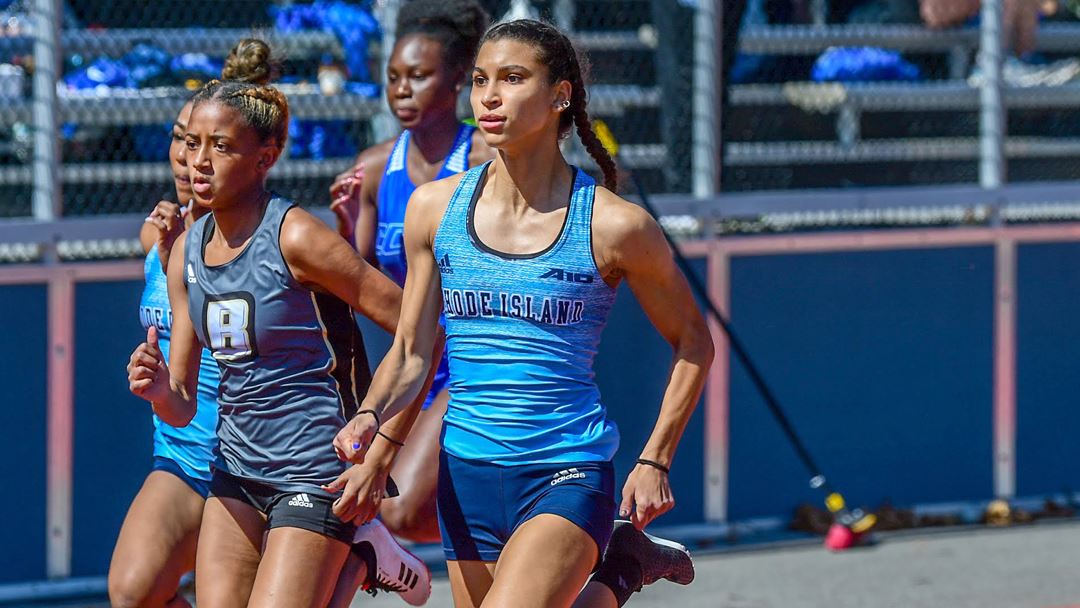 The Ocean State dominated in the Sunshine State last Saturday as the URI Women’s Track and Field competed in the University of Southern Florida Invitational Meet. Photo from gorhody.com.

The University of Rhode Island Women’s Track and Field team ventured to Florida and found success at the University of Southern Florida Invitational Meet this past weekend.

Only 10 athletes traveled to Florida last weekend from the women’s team. The University of Southern Florida hosted a men’s track and field invitational meet on Friday, so the women’s teams competing the next day were not able to have a pre-meet to prepare for the invitational on the following day.

“It was a whirlwind,” said Head Coach Laurie Feit-Melnick. “Traveling on Friday, getting in on Friday night and competing Saturday for the one-day meet.”

Two seniors had impressive results at the invitational in the hammer throw and hurdles. Senior Julia Campezado had an impressive 46m11/151’3 throw earning her second place overall for the day. Senior Kristina MacLure kept the success flowing with a time of 59.99 seconds in the 400 meter hurdles. Although this was her fourth best time, it still earned her second place for the meet.

“It was huge to go to a big invitational like this and place second,” said Coach Feit-Melnick. “It’s huge for Julia and Christina.”

It was also a great day for the URI relay runners who ran season best times. The 4 x 100 relay compiled of Trinity Smith, Kelly MacDonnell, Xiana Twombly and Bethany DeLoff had a time of 47.43, a season best, placing seventh in the invitational and fourth in the A-10 conference. The 4 x 400 also earned a season best time of 3:50.70, placing fifth in the invitational and fourth in the Atlantic 10 conference. The athletes that took part in this event were MacDonnell, DeLoof, Smith and Kristina MacLure.

A couple athletes also achieved personal bests at this meet. Senior Samantha Andrews placed fifth in the Discus with a mark of 43m07/141’4. Xiana Twombly, a junior sprinter, competed in the 200 meter with a time of 25.04, placing sixth overall.

“It was a good meet. There were multiple personal bests, season bests, and URI all-time top 10 marks,” said Coach Feit-Melnick.

In the midst of the COVID-19 pandemic, and the team’s indoor season being cut short, there wasn’t a lot of preparation going into the outdoor season. URI also does not have an outdoor facility that the team can practice on. Meets such as this one gives the team experience on the outdoor track facilities that they use to prepare for the championships.

“For many of the women, this is their first outdoor season in two years. It’s a challenge,” said Coach Feit-Melnick.

In addition, very limited numbers of athletes are allowed into each meet because of COVID-19 restrictions and team budget. Coach Feit-Melnick said meets have been hard to find because of limited outdoor facilities and new restrictions. She also said she appreciates every meet the team is able to compete in and views every one as a great opportunity.

“It’s still a challenge to try and find meets because it’s not a normal outdoor season,” she said. “It makes it a bit of a challenge if you can’t get more than two people into an event.”

The URI Women’s Track and Field team will split up on April 9, going to the University of Connecticut “Dog Fight” Meet as well as the Providence College “Ocean State” Invitational.