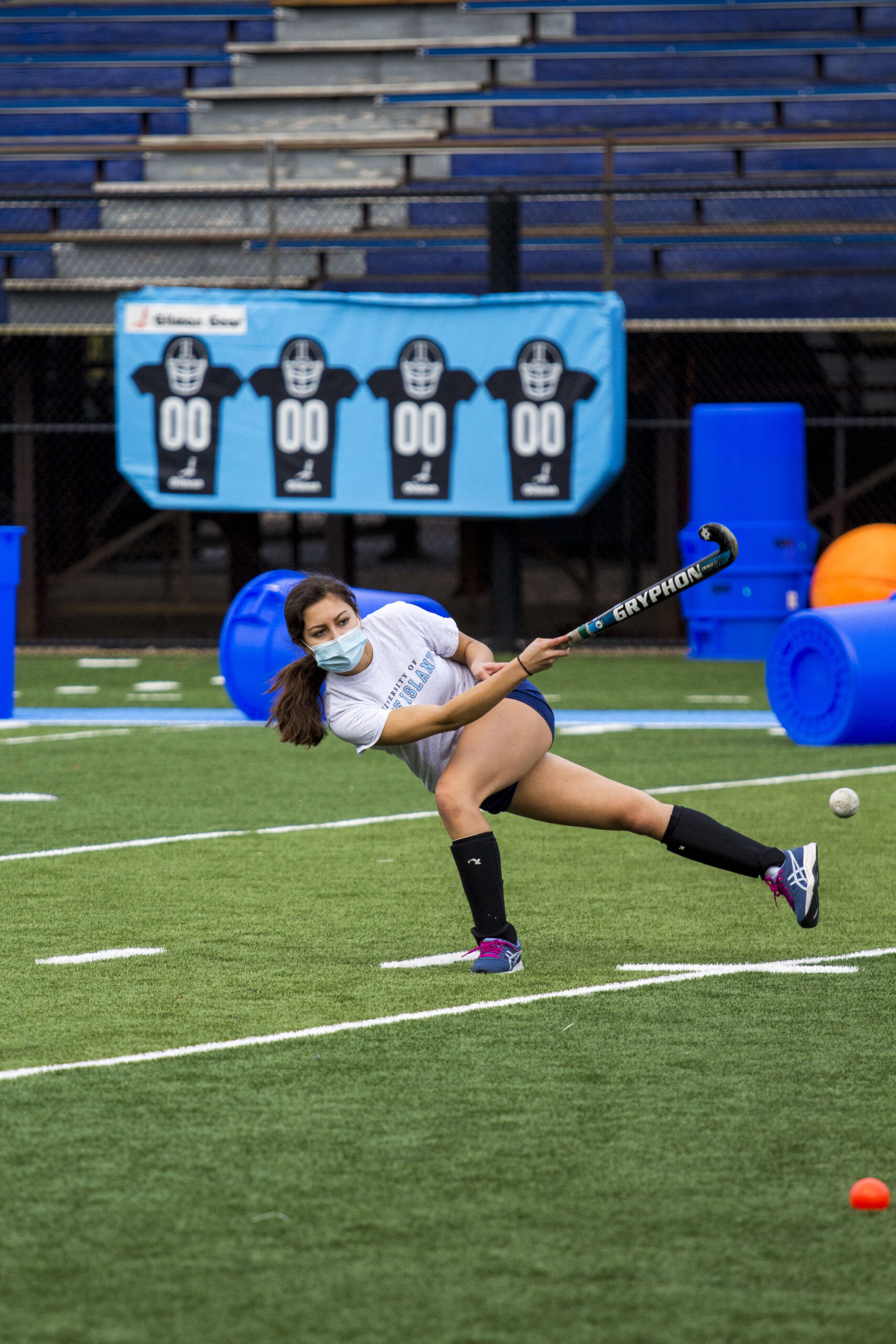 The field hockey team is one of many at URI that has had their season turned upside down due to COVID-19. Photos by James McIntosh.

The COVID-19 pandemic has complicated the sports world, with professional and Division I athletics being paused and canceled in some instances.

While universities struggle to field their Division I  teams, the challenge to get club sports teams playing must also be considered. However, Joe Wilbur, coordinator of club sports at the University of Rhode Island, and the University of Rhode Island administration and health department have worked tirelessly to ensure Rhody club athletes get as close to a normal experience as possible.

In the fall semester, Rhody club sports had little trouble with COVID-19; all club teams were able to practice in small groups without suffering any pauses. Unfortunately, the spring season did not start out the same.

“That couldn’t have been any more different this spring,” said Wilbur. “We had to start the semester off with a 14-day quarantine, and we couldn’t begin practices until Feb. 1.”

After beginning in February, multiple teams were met with adversity and pauses were taken as necessary.

“Within a week, we had multiple teams with multiple cases which forced us into a 10-day quarantine period,” said Wilbur. “That process sort of repeated itself constantly.”

As a club athlete, constantly being told you cannot do the thing you love can be very frustrating. Katie Bonacci, a junior who is a member of the club field hockey team and serves as vice president of the Club Sports and Intramural Council, acknowledged this level of disappointment, but said there were other ways the team stayed connected.

“It has definitely been difficult not being able to play games, but we have found other ways to bond as a team and continue playing,” she said.

One of those ways has been through alternative, team-planned activities. For the field hockey team, Bonacci said this came in the form of a big sister/little sister program.

“For the first time, we implemented a big/little program so that we can still bond with the freshmen,” she said.

This program featured gifts from upperclassmen to the freshman and various bonding activities. Bonacci said that since they weren’t able to be together often on the field, the set-up helped everyone to get to know each other better.

In the meantime, Wilbur and the administration worked to ensure that teams

could still practice. The University offers over 15 club sports teams, including male, female and co-ed. Games are held all over the country, but primarily in New England.

“We understand that club athletics are the reason some people choose to attend this school,” he said. “It is my job to make sure that they can participate in their sports, and the administration has been very understanding and helpful during these times.”

Despite how minimal it may seem, Rhody club sports allowing teams the opportunity to practice is more than many other schools around the area are permitting this spring. Consistent activity amongst the teams is hard to maintain when it comes to all clubs on campus, but Wilbur said he has finally gotten club sports teams at a point where everyone is practicing consistently.

Continued practice and optimism for the fall are the fuel that keeps all general club sports athletes and administers going. Bonacci is eagerly awaiting the chance to get back onto the field and play with her teammates.

“We are super competitive, so we are just looking forward to next year when we hopefully get the opportunity to play games,” she said.

In terms of what the fall will look like, Wilbur said the department can not be certain with COVID-19 still present, but he is optimistic for club athletes and their teams.

“I hope that everyone can be vaccinated by next fall, and we can continue as normal,” said Wilbur. “We have certainly worked our tail off this year, and I think we are all looking forward to some normalcy.”