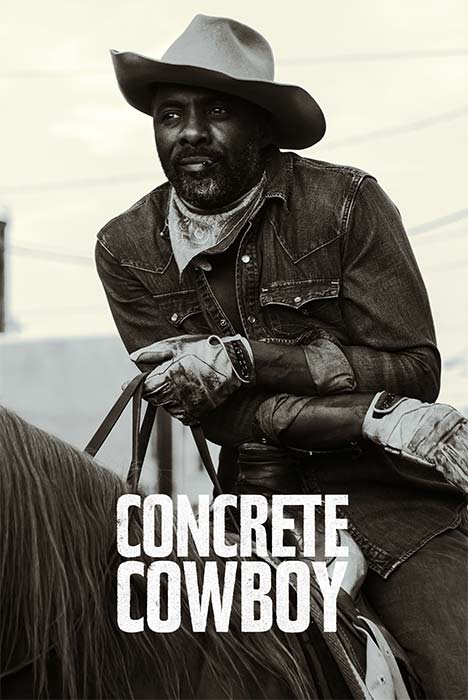 The Black cowboy community is showcased in the Netflix original starring Caleb McLaughlin and Idris Elba.  Photo from tiff.net.

“Concrete Cowboy,” starring Netflix breakout star Caleb McLaughlin, is the fascinating coming-of-age story of a troubled teen struggling to find where he belongs.

The “Stranger Things” star successfully plays the main character of Cole, a 15-year-old from Detroit, in the “ghetto cowboy” inspired film. After multiple incidents of violent behavior and resistance to law enforcement, Cole was expelled from his high school, and after expressing her disappointment with him, his mother broke the news that he would be staying with his father Harp (Idris Elba) for the summer in Philadelphia.

After arriving in his father’s hometown, reality sets in for Cole when his mom locks him out of the car. The moment she sped off, my stomach dropped. At this point, we’re only five minutes into the movie, and we don’t know much about Cole, but I couldn’t help but sympathize with him. After all, he’s still a kid, stranded with his bagged-up items in hand.

Going into it, I expected there to be more aggression between Cole and Harp during their first interaction, especially because Cole called his father a racial slur prior to his arrival. However, Harp just took him home and showed him his sleeping area: the couch.

Aas the movie progresses, we see Cole find himself at home, but we didn’t see him really relax until he was smoking and driving around with his decade-old friend, Smush. However, this light-hearted kind of fun was cut short when Harp told Smush to stay away from his boy, not wanting him influenced by his “bullsh*t.”

Following this fight with his dad, Cole snuck off to the stables, where he met seemingly-friendly, but actually dangerous Boo, the horse Harp bought at an auction just the week before. Convinced that Boo and Cole share a special bond, an older woman named Nessie (Lorraine Toussaint) tells him that Boo is his horse, but he is not allowed to sleep in the stables.

Cole’s conflict comes from trying to balance his two lives — drug-dealing with Smush and riding along the straight and narrow with his father.

Although he does start to lean towards his father’s lifestyle, Cole is still angry with himself, and we never get a sense of reward from this.

McLaughlin and Elba both played the serious, cold-to-the-touch archetype with ease. Although this is a complete 180 from McLaughlin’s character in “Stranger Things,” who is intensely loveable and loyal, he portrayed the rebellious, unemotional Cole well.

Going into the film, I expected there to be greater character development within Cole. All we know about him is that he resents his father for “abandoning” him, and even this we’re never given great details about.

Elba also fulfilled his role as the estranged and hardheaded father figure well. However, I believe we see more character development from his character. Although we are not given much information about Harp’s past, it’s clear that he was not in the picture for quite some time. By the time he and Cole reunited, we could tell that he had matured, and could potentially become a role model for Cole.

Although Cole and Harp are the main characters, the real story comes from the other riders at Fletcher Street Stables, their home, which is being put at risk by gentrification. We get to learn about their personalities, and the history of whitewashing/racism they have faced. This movie is an educational opportunity to learn about the Black experience, especially the sides of it that have been hidden for so long.

“It’s a real community that exists right now and has been part of Philadelphia and other urban cities around America for over 100 years,” he said. “These communities had these beautiful [horses] as part of their lifeblood. And when the motorcars came, the Black folk kept the horses as part of the fabric of their communities.”

Although I wished there were more of Cole’s and Harp’s characters to grab on to, “Concrete Cowboy” balanced city life and nature beautifully and fulfilled the true reason the movie was created by capturing the untold story of the Black Western cowboy.