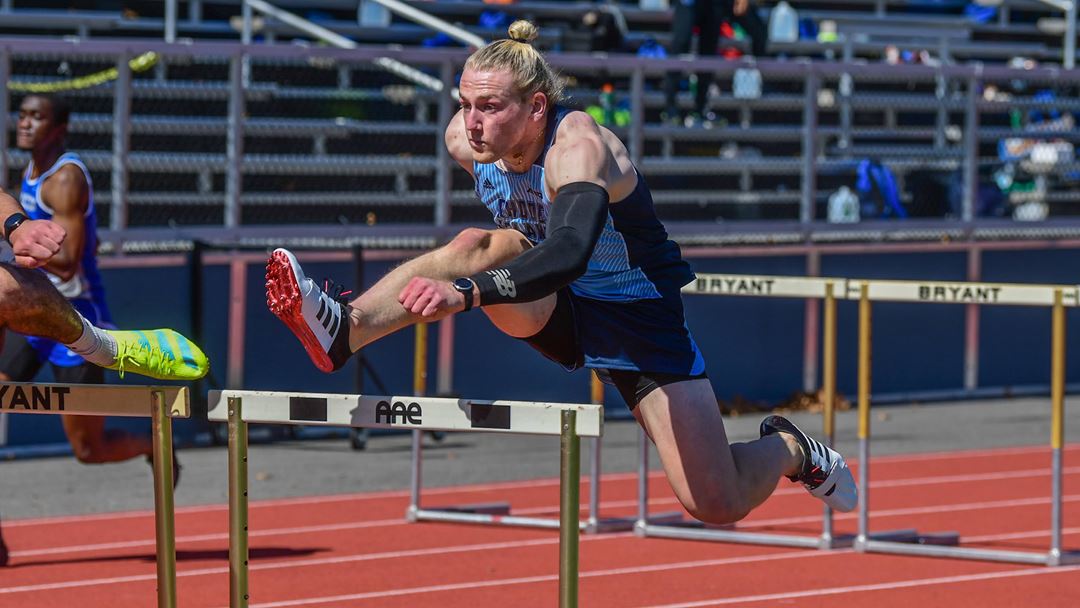 Rhody ran up against tough competition at the UConn Dog Fight last weekend. Photo from Mike Scott via gorhody.com.

The team placed second, competing against the home team Huskies, Southern Connecticut State and the University of Albany. Overall URI lost to UConn by 171 points with UCONN earning 295 points and URI earning only 124 in 17 events. URI Track and Field Head Coach John Copeland was happy his team matched up against a strong opponent.

“It was a good time for us to get an awakening call,” he said. “We were undefeated through the indoor season and the early outdoor season. We got into some really good competition this past weekend.”

Although Coach Copeland was disappointed by the loss, he was pleased by many individual performances throughout the day. Starting off with field events, sophomore jumper Orion Joyner captured a big win in the triple jump with a mark of 13.99 meters. Trevor Rooney was just short of his fellow teammate, jumping 13.82 meters and took second place. Freshman Nikolaj Freschlin nearly tasted victory as he placed second throwing the javelin 64.88 meters. The pole vault crew of D.J. Smalls and Drew Nealey both placed in the top five, and Zachary Nyhart also had great performance with an eighth place finish. Smalls cleared an impressive 4.76 meters while Nealey and Nyhard both had personal records of 4.61 meters.

“We had some good spots but if we want to do anything in the Atlantic 10 Championships we need to get a little more of a performance coming out,” Coach Copeland said. “It has been a tough year for the men.”

Like many student athletes, COVID-19 has affected the track and field team. Since the indoor season was condensed while other teams had a full season, it put the Rams in a deficit. However, they have still managed to stay on top, only dropping one meet in the past two months.

“COVID has challenged us because we know that the season is always in jeopardy,” sophomore La’Rue Martin said. “All the hard work we put in can go down the drain from one COVID-19 test. We just control what we can control, and focus on the task at hand.”

The next task at hand was at the UMass Multi-Meet held earlier this week. Trio Nealey, Stephen Cirella and Devin Donahue raced in the decathlon meet, while the remainder of the Rams will be heading to Massachusetts to compete in the George Davis Invitational Meet at the weekend. In order to reduce injuries in soreness, Coach Copeland said the athletes competing on Tuesday and Wednesday will sit out of the meet this weekend. Results for the midday meet did not come in before publishing.

Looking forward, Coach Copeland is confident that his team can win both the Atlantic 10 Championships, as well as the New England Championships which features competitors from 65 schools. URI’s biggest obstacle on the way to the gold will be Geroge Mason, a team that had a full indoor season and is stacked with high-caliber athletes.

“We have won the Atlantic 10 [Championship] 24 times,” Said Coach Copeland. “We are looking forward to seeing if we can get a twenty fifth one in there.”