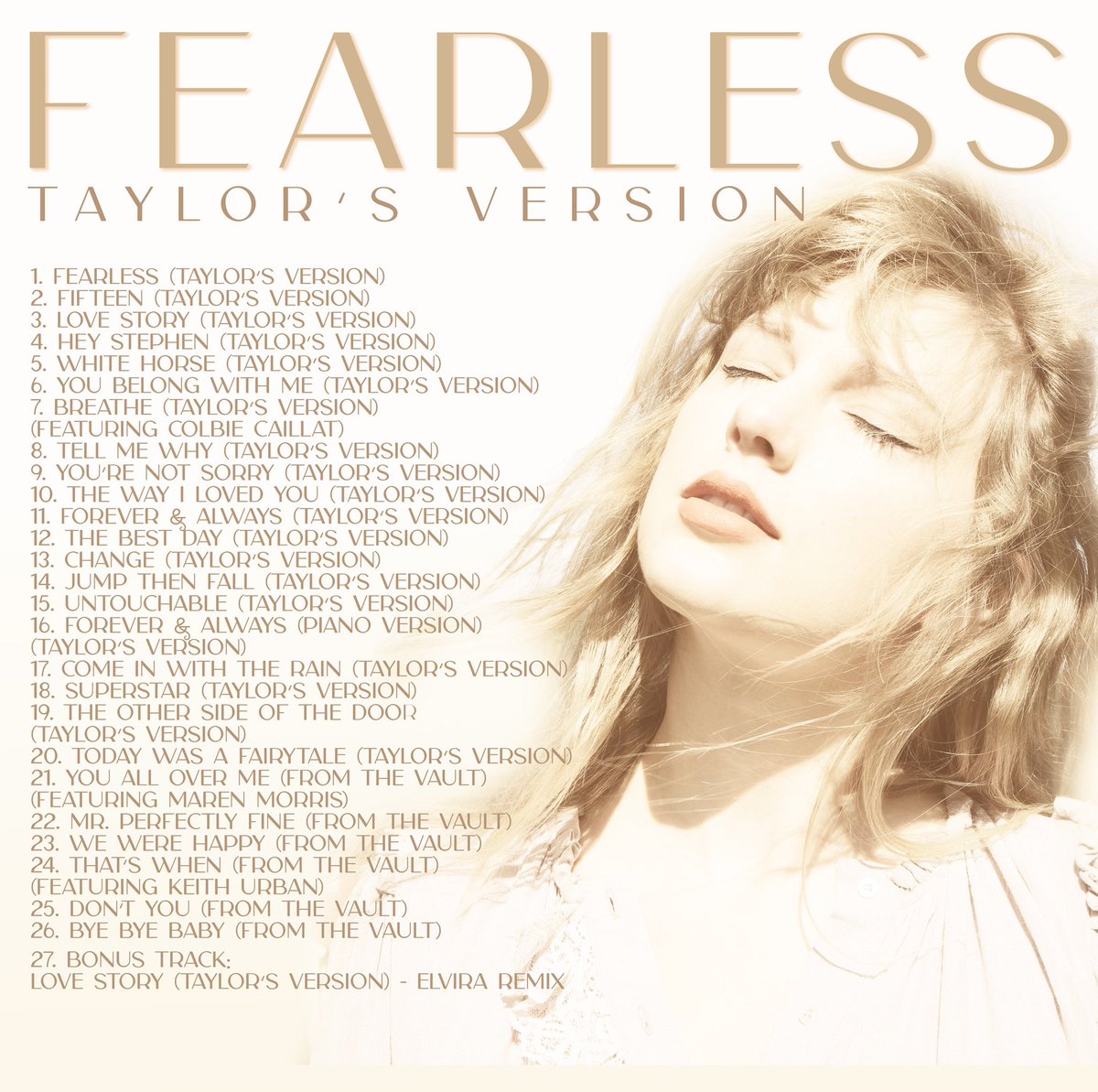 Taylor Swift’s re-recording of her 2008 album “Fearless” contains classic Swift songs from the original as well as some new unreleased tracks. Photo from headlineplanet.com.

With the release of her fully re-recorded album “Fearless (Taylor’s Version),” Taylor Swift has started a new musical era while preserving the nostalgia from her past.

Swift’s original 2008 album was impressive, especially considering she was an 18-year-old newbie to the industry. She is the first artist I ever got hooked on during my childhood, and a large part of me was scared to hear these re-recordings since the original music holds such a precious place in my heart.

After just one listen, that same “hooked” feeling has been rekindled from my 8-year-old spirit.

The first 20 tracks are all re-recordings of previously released songs off of the Grammy Award winning “Fearless.” The distinctions, while subtle to an untrained ear, create a world of a difference for Swifties everywhere.

Swift’s vocal maturity is the most prominent change from the originals. Her mixed belt and falsetto show little to no strain, even in the highest of harmonies. With this advanced vocal technique also comes better articulation. She flawlessly incorporates her musical coming-of-age with the original lyrics heard across the world.

These 12-year-old lyrics now represent a plethora of new meanings for Swift and her fans.

She wrote the words, “Back then I swore I was gonna marry him someday, but I realized some bigger dreams of mine” as a teenager, unaware of her future impact on the industry and the world. Swift still has plenty of dreams to conquer after her 11 Grammy Awards, five world tours and plenty of other honorable accomplishments.

Take her song “Change” as another example of her lyrical progression. She sings, “These walls that they put up to hold us back fell down.” This line now represents the many obstacles that Swift has overcome during her time in the spotlight, especially the challenges with her previous record executives.

Instrumentally, the album is addicting. She preserves the original authenticity, but heightens the musicality with upgraded production techniques. Every single instrument line is enhanced in the re-recorded version.

Swift also welcomed Australian musician Keith Urban to add harmonies throughout the album. Urban has been an open supporter of Swift from day one, and even covered her song “Lover” at the Washington State Fair in 2019.

I could write a novel about the best “Fearless (Taylor’s Version)” moments from the re-recordings, but I’ll just underscore two of my favorites.

“The Way I Loved You” has always been my favorite Swift song of all time, and “Taylor’s Version” only confirmed this. The combination of vocal clarity, rhythmic intensity and lyrical vulnerability had me spinning around my bedroom after my first listen.

The same goes for “You Belong With Me (Taylor’s Version).” The fact that Swift layers her own voice for every harmony conveys a sense of independence that had been washed away in the original album.

Swift also released six brand new songs “from the vault,” which she originally wrote a decade ago and kept secret all this time.

“You All Over Me (feat. Maren Morris) (Taylor’s Version)” really brings out Swift’s 2000’s twang from the get-go. Maren Morris’s lower harmonies add such depth to the song and perfectly compliments the higher guitar riffs and harmonica lines. With lyrics like “But no amount of freedom gets you clean / I’ve still got you all over me,” the emotions run deep in this track.

The second song from the vault, “Mr. Perfectly Fine (Taylor’s Version),” also embodies her original country flare. This track tells a heroic story of heartbreak and recovery — a pattern that Swift has publicly endured throughout the years. She now stands strong with Joe Alwyn, her boyfriend of four years, who wrote under a pseudonym on Swift’s ninth album “evermore.” The song is upbeat and resonant, which adds even more creativity to the re-recordings.

“We Were Happy (Taylor’s Version)” switches to a somber sound with dynamic acoustic guitar leads. The musicality steps up with every stanza of this song. Swift’s isolated vocals start off as the highlight and slowly integrate with lower harmonies. I found plenty of parallels between this track and other songs that Swift has released, such as “mirrorball” and “Mine.”

There’s a mystical side to “That’s When (feat. Keith Urban) (Taylor’s Version)” with more of a pop vibe than the rest of the album. The duo tells a love story from two perspectives in this track with a massive bridge build up. Both Swift and Urban shine with background vocal layering and a simple melody.

“Don’t You (Taylor’s Version)” sounds similar to her more recent releases rather than abiding by the country stylings of “Fearless.” There is a pulsing beat at the forefront, strengthened by a two-part harmony that preserves the youthful lyrics. I would choose this song as my favorite “from the vault” release.

Swift tops off the album with “Bye Bye Baby (Taylor’s Version),” a flawless mixture of her maturity and youthful exuberance. It’s hard to believe that Swift wrote this song at such a young age, as the lyrics are so well executed. She sings “Guess I never doubted it / Then the here and the now floods in / Fells like I’m becoming a part of your past,” which fans have interpreted as a goodbye message to the “Fearless” era now that Swift has reclaimed her old self.

As for which re-recorded album is coming next, many fans are guessing her 2014  album “1989,” as Swift wore the same pair of earrings to a recent interview that were featured in her “Blank Space” music video. Swift is a master of easter-eggs, and there are likely more to come.

“Fearless (Taylor’s Version)” is more than enough entertainment to hold me over until she decides to release more music. So for now, I’ll keep these songs on repeat.