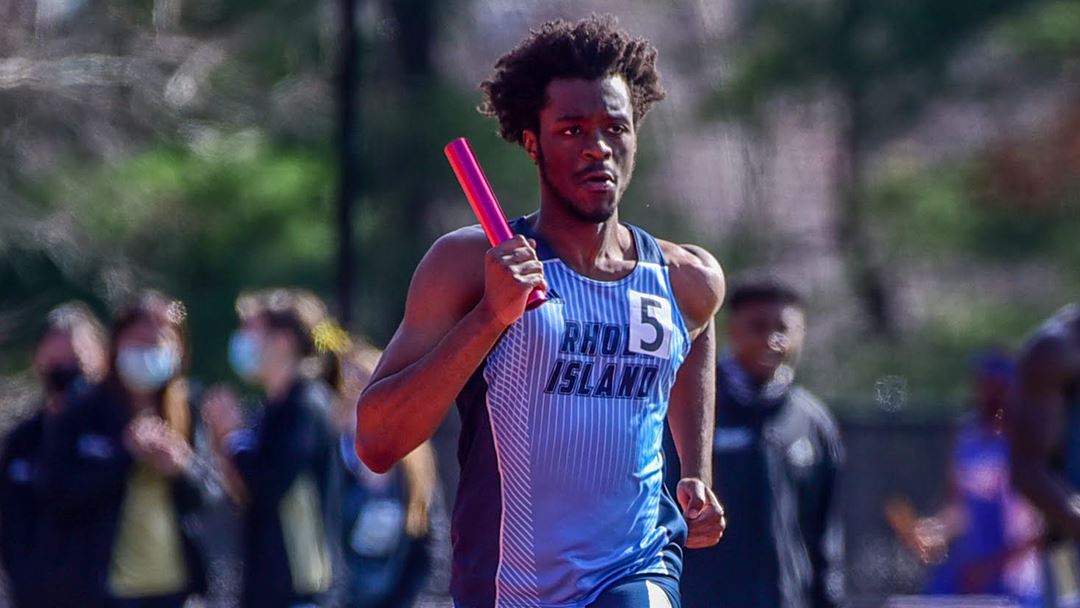 Battling the elements at the George Davis Invitational, both the Men’s and Women’s Track and Field teams competed well. Photos from gorhody.com.

The University of Rhode Island Men’s and Women’s Track & Field teams returned to action this past week for the George Davis Invitational, and the men’s team also competed in a dual meet against College of the Holy Cross on Wednesday.

Despite temperatures in the upper 40s with light rain and wind for last Saturday’s meet, Rhode Island Men’s Track and Field Coach John Copeland was impressed with how his team performed.

“Considering the weather, I thought that they did a really good job,” he said. “It was not a day that you wanted to be outside, and they responded well. It’s part of outdoor track––learning how to put up with the elements and compete the best you can in those conditions because they are the same for everyone.”

Senior Anthony Delasanta picked up his first win of the outdoor season in the 200-meter run with a time of 21.92 seconds. He picked up another victory later in the day as a member of the 4×400-meter relay team. Ryan Curtis picked up his third consecutive top two finish in the 400-meter hurdles, coming in second with 55.18 seconds.

The team also put together strong performances in the field events. Rhody swept the podium positions in the high jump as Jack Reichenbach finished on top with a distance of 1.98 meters. Quindel Wilson and Matt Santy followed with distances of 1.93 meters and 1.88 meters, respectively.

Rhody also commanded the leaderboard in the pole vault, taking four out of the top five spots. D.J. Smalls was the top finisher, coming in second with a distance of 4.80 meters. He was followed by Zachary Nyhart, Isaiah Powers and Gregory Potter, who finished third, fourth and fifth respectively.

“The [pole vaulters] are one of our strong parts on our team and with the conditions the way they were, I was ready to pull the plug and say ‘let’s go home,’ but the weather cleared up a little bit, and they got going, and I thought they did a really good job,” Copeland said.

The throwers for the women’s team were the only team members represented at the meet this weekend. They dominated the hammer throw, taking five of the top 11 places in the event. Senior Ashley O’Loughlin was the top finisher for the Rams, coming in second place with a distance of 51.46 meters. Samantha Andrews finished two spots behind her with a distance of 49.95 meters. Erynn Field, Noelya Delacruz and Nicole Valdez followed, finishing in sixth, seventh and 11th place respectively.

Andrews also finished fourth in the discus throw, followed by freshman Megan Wood, who finished sixth and eighth in the shot put.

“The throwers are doing outstanding and we are really excited about their progress,” Rhode Island Women’s Track and Field Coach Laurie Feit-Melnick said.

The men’s team returned to the track on Wednesday for a dual meet against Holy Cross, where they would dominate. The team placed first in 11 of the 15 individual events, accumulating 111 points and earning several personal bests during the meet. Rhody shined especially in the 200-meter run, with Rhode Island runners taking the top six spots in the race. Freshman Liam Creeley beat out the competition for the first individual win of his college career.

Both teams return to action this weekend for their final meet before the Atlantic 10 Championships––the UConn Invitational. The men’s team will kick things off on Friday at 10 a.m. and the women’s team will begin on Saturday at 11 a.m.