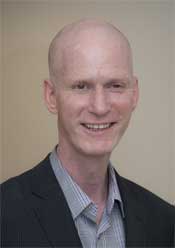 The unique perspective and love for literature that English professor Stephen Barber brings into the classroom has inspired him to push his students towards “genuine intellectual engagement.”

Barber has been working as a professor in URI’s English department since 1997 but had many adventures before he arrived at the University 24 years ago.

Born in Montreal, Canada, Barber has lived in several parts of Canadian and multiple countries in Europe such as Germany and England. Barber completed his undergraduate studies in philosophy, cultural studies and English at Trent University in Ontario, Canada. Barber then returned to Toronto, Canada where he completed his Ph.D. in English at York University.

Following this, Barber landed in the United States where he spent two years at Duke University for a post-doctoral fellowship in queer studies with professor Eve Kosofsky Sedgwick, a groundbreaking scholar of queer studies. Barber said his decision to become a professor was the inevitable career path for him.

“So many things influenced me [to become a professor],” Barber said. “To begin with, having been taught by extraordinary persons. They were extraordinary because they were contagious in their love for literature and what the study of literature can do for the world. That inspired me. I think what also inspired me was seeing myself and my peers be stirred by the possibilities of what critical thinking can do in one’s own existence and the world at large.”

Barber has taught many courses at URI, ranging from ENG 350: Literary Theory and Criticism, ENG 243: the Short Story and ENG 383: Modernist Literature from 1900 to 1945. Though he loves all the courses that he teaches, Barber said his favorite courses to teach are those focusing on 20th-century modernism in European literature and literary theory.

“I love sharing [my] love for literature and inspiring others,” Barber said. “Seeing students move toward genuine intellectual engagement is one of my favorite things.”

“What first got me interested in Virginia Woolf’s work was that her works are explorations into modes of being that are not reducible to identity, but at the same time, they take seriously how identity figures in any historical moment,” Barber said. “Also, Woolf produced anti-Fascist ethics during a time when Fascism was prevalent and thought through how one could exist ethically in the face of Fascism.”

Barber strives to inspire students, and according to many of his students, he does just that. James Paolino ‘20 took Barber’s ENG 201: Principles of Literary Study in the spring 2019 semester and had only positive things to say about not only Barber’s instruction but also the environment of his classroom.

Barber believes his study of Woolf’s 20th-century literature can be used today to teach important lessons about diversity and inclusivity, especially in the community we live in.

“In our texts, we look at how we are not imprisoned in the subjectivities that we think are given,” Barber said. “Inclusivity comes with the fundamental recognition that being is more multiple than identity and that we must embrace identities. Literature teaches us to embrace the multiplicity in modes of being. I definitely teach literature that thematizes and understands itself to be calling into being of appreciation of the fundamental diversity that comprises humanity.”