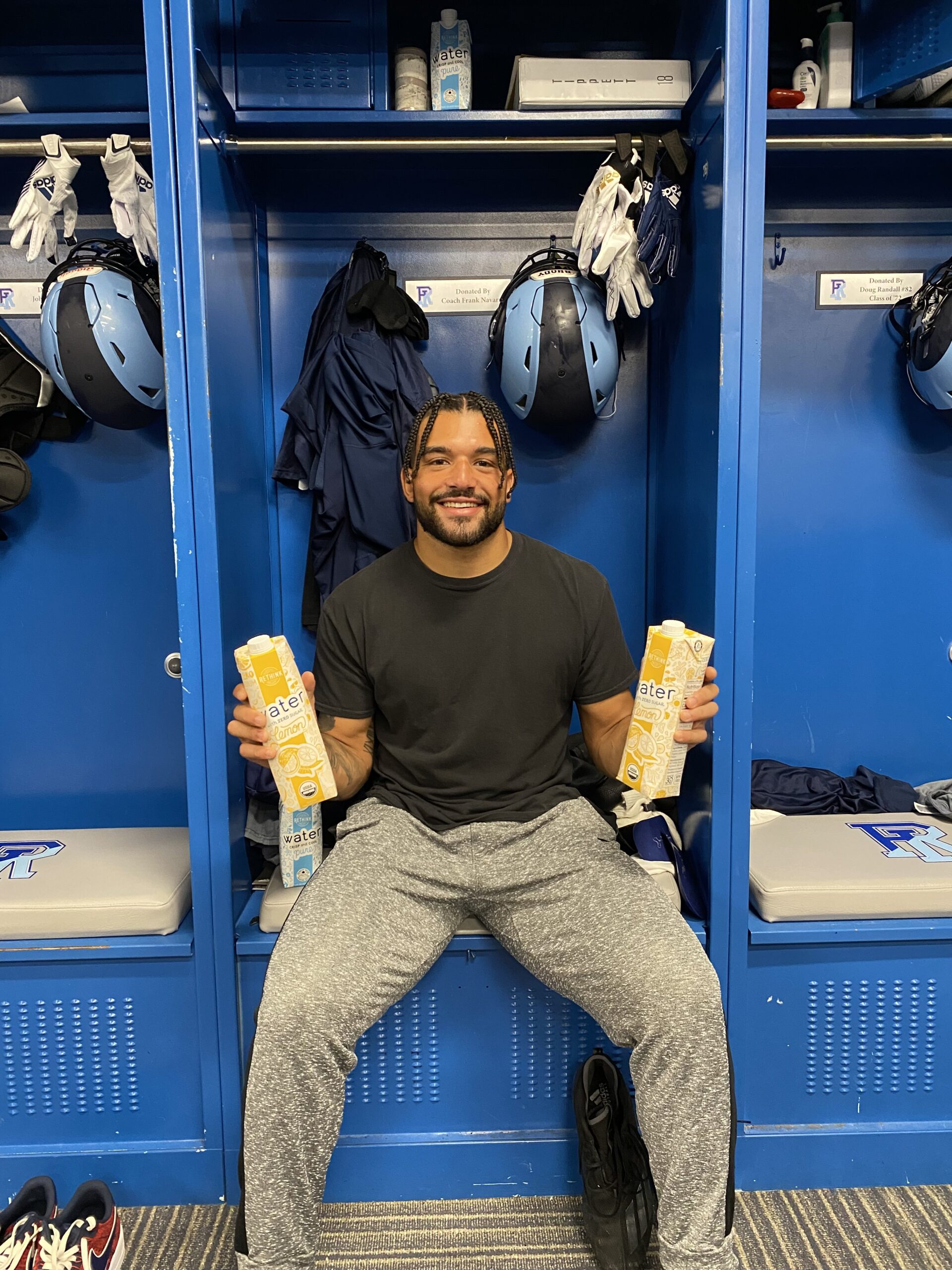 Senior defensive back on the football team Coby Tippett, center, is one of many athletes benefiting from his name, image and likeness. Photo from gorhody.com.

“One who engages in a pursuit, study, science or sport as a pastime rather than as a profession.”

That’s the Merriam-Webster Dictionary definition of  “amateur”–– a word that was used for more than 100 years by the NCAA to justify why student-athletes couldn’t be compensated.

But this changed beginning July 1, when the NCAA announced that it was suspending its name, image and likeness (NIL) policy on an interim basis to level the playing field between states that had passed NIL legislation and states that hadn’t.

Student-athletes, regardless of division, are now able to benefit from their NIL through sponsorship deals, endorsements, paid public appearances, social media and use professional services for NIL activities. Accepting compensation in exchange for athletic performance, specific athletic achievement and as an inducement to attend a particular school remains prohibited.

With federal legislation pending, the NCAA’s ruling also gives states and institutions the power to create their own policies and regulations regarding NIL. Thus far, 28 states have passed legislation with more anticipated in the near future.

Rhode Island lawmakers are still in pursuit of NIL legislation. R.I. House Bill 5082, sponsored by Warwick Democrat Joseph Solomon, was passed by the House of Representatives in June. The bill, if passed by the Senate, would allow collegiate athletes in the state to participate in NIL and prevent the NCAA from infringing on these activities beginning in January 2022.

Throughout the summer, the University of Rhode Island has been working throughout the summer on drafting its NIL policy for student-athletes with plans of keeping restrictions at a minimum and leaving all responsibility to student-athletes to make decisions for themselves. Student-athletes won’t be allowed to accept deals with brands that promote illegal drugs, alcohol, tobacco, cannabis, adult entertainment, gambling or substances/methods prohibited during athletic competition. The use of school branding and trademarks also won’t be allowed, unless the student-athlete obtains a licensing agreement with the University.

Student-athletes will also be required to disclose their deals with the University. Violation of these parameters would result in suspension from the team and/or possible loss of athletic aid.

Kacey Light, the newly-appointed Chief NCAA Compliance Officer for the University, has been in charge of these efforts as well as ensuring that student-athletes are aware of the resources that are available to them. As a former student-athlete at Skidmore College herself, she is excited that athletes will finally be treated like everyday college students.

“The fact that [student-athletes] are now put in the same category as the general student body is a great thing where they can try to set themselves up for success the way that anyone else can,” Light said. “Basic things like our student-athletes couldn’t even go home and hold their own swimming clinics or help students learn how to play basketball and now they can. It’s how it should’ve been.”

With all of these changes, the focus has shifted on providing student-athletes with the best resources to make the right decisions.

In July, the Atlantic 10 announced a multi-year partnership with TeamAtlemus and Anomaly Sports Group to provide league-wide educational support to student-athletes looking to maximize their NIL opportunities. TeamAltemus and Anomaly Sports Group will provide education through a series of conference-wide virtual and in-person sessions as well as individual informational sessions for each team in the conference. These sessions will focus on areas such as decision making, contracts and the legal considerations of NIL. The league is also pairing this with another partnership with content and compliance software company INFLCR, who will provide schools with technology through educational resources, brand-building techniques and a disclosure technology platform, to help student-athletes best explore their NIL opportunities.

“I think it’s a great partnership,” Director of Athletics Thorr Bjorn said. “The league has identified two companies that do this for a living that provide great educational opportunities. Let’s not reinvent the wheel. Let’s go with the professionals that are out there to provide an avenue of education, and I hope our student-athletes take advantage of it.”

Light also likes the partnership because it provides student-athletes with resources that compliance offices may not be able to give.

“[The ultimate goal] is to take the education burden off of the compliance departments at schools,” she said. “They are educating on a lot of things that most compliance people aren’t experts on. We are not experts at looking at contracts. We are not experts on filing taxes. They are really helping fill those gaps of education that our student-athletes are going to need if they want to engage in NIL activities.”

Senior Coby Tippett, a defensive back on the football team, is one of many URI athletes that has taken full advantage of NIL. Tippett signed deals with wing chain Wings Over and beverage brand Rethink Water last month and recently added Boston-based streetwear brand The Label to his list of partnerships.

“It’s huge––it’s long overdue,” Tippett said about the passing of NIL. “A lot of people were pushing for it for a long time, and I thought it was something that shouldn’t have even been a question because as a student-athlete, you’re sacrificing so much on a daily basis.”

He is especially excited for walk-ons who have to sacrifice more because they aren’t on an athletic scholarship and typically don’t get the recognition that scholarship players receive. Tippett sees NIL as an opportunity for them to get their names out there.

Tippett won’t be receiving monetary compensation from his deals with Wings Over and Rethink Water, but he wants to use these opportunities to help build up these brands and his own brand in the Rhode Island area. He credited his parents and Defensive Coordinator Jack Cooper, who he said has devoted several football meetings this summer to the NIL laws, for helping him throughout this process.

“This is all new to me––working on my personal brand,” Tippett said. “[These partnerships] will really help because they are official businesses and you got to learn how to act like a professional.”

There is one caveat to student-athletes being able to benefit off of their NIL. These rules don’t apply to international student-athletes due to federal regulations that bar anyone on an F (or student) visa from earning significant income while studying in the United States. Six percent of current URI student-athletes fall into this category, including redshirt senior and reigning Atlantic 10 Women’s Basketball Co-Player of the Year Emmanuelle Tahane, who calls Bondy, France home.

Initially, she was excited when she learned that student-athletes would be allowed to benefit from their NIL, but that excitement turned into disappointment after she learned on social media that she wouldn’t be able to participate due to her international status.

According to Tahane, she hasn’t heard anything from the University about ways that international students can benefit off of their NIL, but according to Light, URI Athletics isn’t in the position to help because it is a federal issue.

“The only way it would change is if the [Student and Exchange Visitor Program (SEVP)] changes its policies,” she said.

The SEVP is a program within the U.S Department of Homeland Security that is responsible for managing foreign students and exchange visitors during their time in the United States. According to a statement released by the program in June, the SEVP is “actively monitoring federal and state NIL legislation and will provide updated guidance at an appropriate time.”

Player empowerment was a major theme in college athletics during the 2020-21 academic year and the introduction of NIL is only a continuation of that. In its early months, we have already seen the impact on student-athletes benefiting from their NIL. Whether it is showcasing their passions on social media, or showing their creativity through supporting a clothing brand, or simply giving back to the youth through a sports camp, these ventures will allow fans to see another side of student-athletes while giving student-athletes the opportunity to market themselves the way any other college student could.

Locally, we may not see the multi-million dollar deals that are occurring in some parts of the country, but it is worth acknowledging that despite that, this is another win for student-athletes.