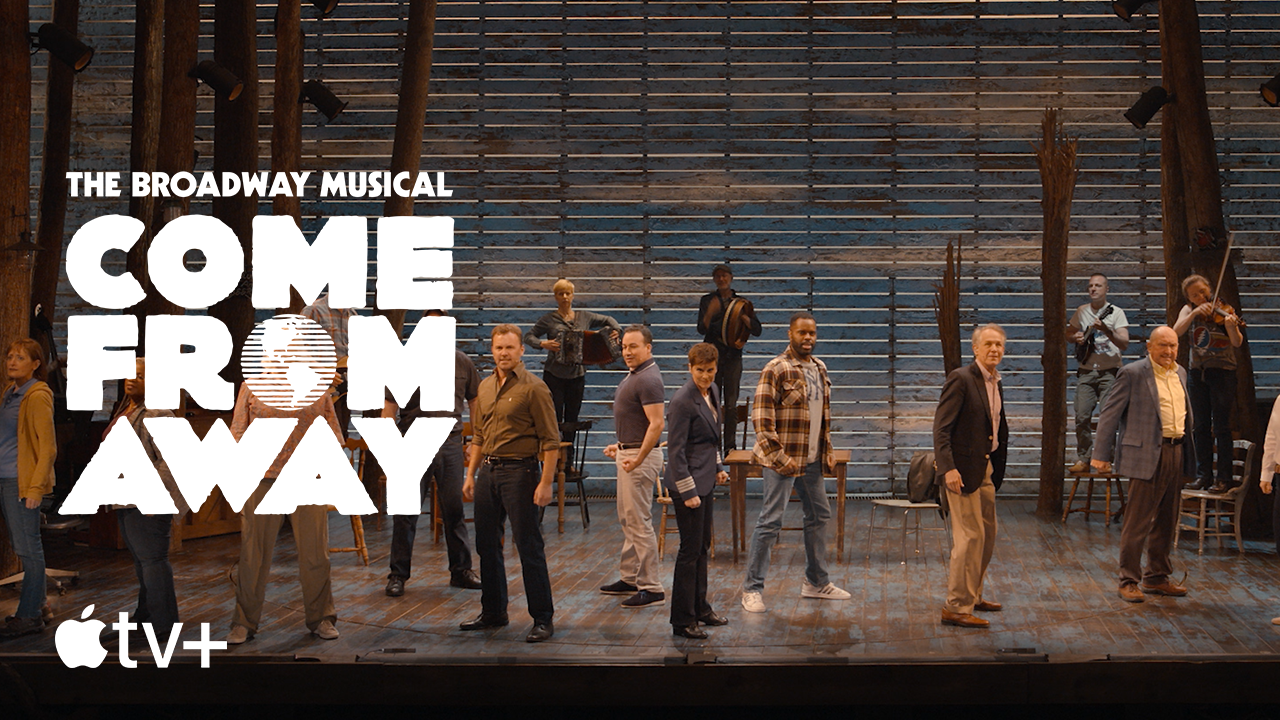 “Come From Away” hit Apple TV on Sept. 10 and covers Sept. 11 and the stories untold. PHOTO CREDIT: deadline.com

The opening shots of “Come From Away” on Apple TV+ show an eerily empty Time Square 14 months into the shutdown of Broadway, 20 years after 9/11. Then you see the crowd pour in, the first audience on Broadway in over a year, all masked up and ready for this one-night-only occasion, the filming of the pro-shot.

David Hein, co-writer of “Come From Away,” describes the show as a “9/12 musical.” It tells the story of a small town called Gander in Newfoundland, Canada and the 38 diverted planes full of people they take in when the terrorist attacks on the World Trade Center and the Pentagon led to the shutdown of the airpace. The people of Gander sheltered approximately 7,000 “come from aways,” doubling the town’s population for five days. The 2017 hit Broadway show tells stories inspired by real-life people from Gander and those who were stranded.

In the 1940s, the Gander International Airport was the largest airport in the world, but by 2001, the airport saw an average of about 14 flights a day, according to the show’s characters. Suddenly, they had 38 planes on their runways and thousands of people waiting to get off them.

With a sparse set, brought to life by amazing lighting and choreography, and only 12 actors playing multiple roles, it’s an incredibly intimate show. A benefit of it being a pro-shot, like “Hamilton” and not a film adaptation, like “The Prom,” is that not only do you get to see the Broadway cast in their element, but the hard work of the backstage crew and creatives as well. Hearing an audience’s laughter during the many funny and lighthearted moments that provided relief through the much harder and emotionally devastating scenes, was also special as Broadway is just starting to open back up its theatre doors.

Having a smaller cast becomes even more impressive when every actor is expected to switch between accents; everyone playing a Newfoundler at some point or another. Still, everyone has a primary character, from the town mayor to a local broadcast journalist on her first day of the job and a Black man who starts off wary of the locals and leaves an honorary resident, eventually setting up a scholarship fund for local high school students. All the characters are based on real people, with the characters even sharing names with them, such as Nick and Diane Marson, whose love story started in Gander on Sept. 11. They are still married today.

It’s hard to not get invested in these well drawn-out characters, and interested in those who inspired them, such as Beverley Bass, the first female captain for American Airlines. Her story was dramatized by Jenn Colella who earned a Tony Award nomination for her portrayal. One of the show’s most popular songs, “Me And The Sky” is a powerful number that chronicles her life, career and eventual feelings when she learns of the terrorist attacks, and that one of the planes hijacked was piloted by her friend Charles Burlingame.

Perhaps the most heartbreaking story surrounds a character named Hannah, who was stranded in Gander. She spends the show frantically waiting for news on her firefighter son until it is revealed that he passed away during relief efforts. She starts a friendship with Beulah, a woman who volunteered to feed and shelter the “plane people,” that remains strong today, with the two women visiting each other in their respective homes.

Especially poignant and important to the narrative is the story of Ali, a Muslim man on one of the planes who is met with suspicion and distrust from many others. His story culminates in a humiliating strip search before they board to return to the United States and once he arrives, the fears his young daughter expresses about having to go to school. It was definitely hard to watch and face the rise of Islamophobia following the attacks, but it is an important narrative that is not often told in 9/11 or even 9/12 stories. In fact, many stories tend to feed into Islamophobic sentiments and beliefs.

Thankfully, I ended up laughing just as much, if not more, as much as I cried. The book and score do an excellent job of balancing between the extremes of everyone’s experiences, being sensitive to the lives lost while also truthful to the real-life stories they were telling. While I dare you not to cry during songs like “Prayer” and “Something’s Missing,” I also expect you to laugh and cheer during “In The Bar/Heave Away” and do a mixture of both at “Finale.”
I had the privilege of seeing the touring company of “Come From Away” at the Providence Performing Arts Center with my brother, friend and mother in December 2019. As a New Yorker born in March 2000, I don’t have my own 9/11 or 9/12 story that I can recall, but being seated next to my mom, who most certainly did, I was able to see the impact even 20 years later that the day had on her and so many others. The show was inspiring with the message to lead with kindness, but also informative to someone like myself who was too young to remember it, or those born after the events.

We often hear “never forget” in association with 9/11, and if “Come From Away” does one thing for those who stream it on Apple TV+ or make their way to a live performance, it ensures that nobody does.