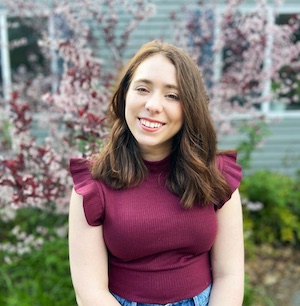 In recent years, solitary confinement has been largely reassessed as a form of punishment in prisons, even leading to reform in some parts of the United States.

Hannah Beaucaire, a senior criminology and criminal justice and political science double major at the University of Rhode Island, worked on a project about solitary confinement for her College of Arts and Sciences fellowship project this summer.

She worked to create 15 short videos posted to TikTok and Youtube about the short and long-term impacts of solitary confinement over history and how her home state of Maine is reforming the practice. Starting in 2011, several reforms have been made to solitary confinement in that state of Maine including introducing perks for solitary inmates to earn extra recreation time for good behavior, according to Beaucaire’s last video entitled Maine’s Solitary Confinement Reform.

“I think the shorter videos [make] it more digestible and more likely that people are gonna actually take away something from it,” Beaucaire said.

Her project, entitled “Stories Stuck in Solitary: Advocating Digitally for Solitary Confinement Reform,” worked to address issues about solitary confinement that have been written about in various scholarly articles and books.

Beaucaire proposed and took on the fellowship opportunity offered by Natalie Pifer, an assistant professor of criminology and criminal justice. She took on the project based on their shared interest in solitary confinement after completing Pifer’s courses CCJ 230: Crime and Delinquency, CCJ 331: Punishment and Corrections and CCJ 476: Policy, Crime and Justice.

Although her original plan was to implement interview data for the project, Beaucaire decided to research the topic through books and articles curated with the help of Pifer, including “Six by Ten: Stories from Solitary (Voice of Witness).”

With funding from the URI College of Arts and Sciences fellowship program and a grant from the URI Office of Undergraduate Research and Innovation, Beaucaire was able to use proper filming equipment and other resources that may not have been available otherwise.

Beaucaire decided to make these videos on TikTok to reach a wider audience of younger people while keeping audiences knowledgeable and engaged within solitary confinement and why reform for the penal punishment is necessary.

“I just hope that it spreads to other states — maybe not necessarily what I did — but that just over time, other states do similar things and realize just how ineffective [this punishment is] and how [it] needs to really be regulated more,” Beaucaire said.

Beaucaire posted the videos online in late summer, and Pifer hopes that the videos encourage people to further research and understand solitary confinement.

“My hope would be that Hannah’s project goes viral and that it inspires a lot of young people that are on TikTok to not only watch funny things on the internet, but also get fired up about issues that really matter to society, like solitary confinement,” Pifer said.

As Beaucaire is scheduled to present the videos at the URI Undergraduate Research Showcase in November, she hopes that her project can help advocate for the regulation of solitary confinement with the support of younger people who are aware of the issues with solitary confinement.

“In the future, [young] people are going to be the ones in government and running prisons or voting and I think just being aware of problems out there and talking about them and making people know that you are aware of those issues, is important,” Beaucaire said.