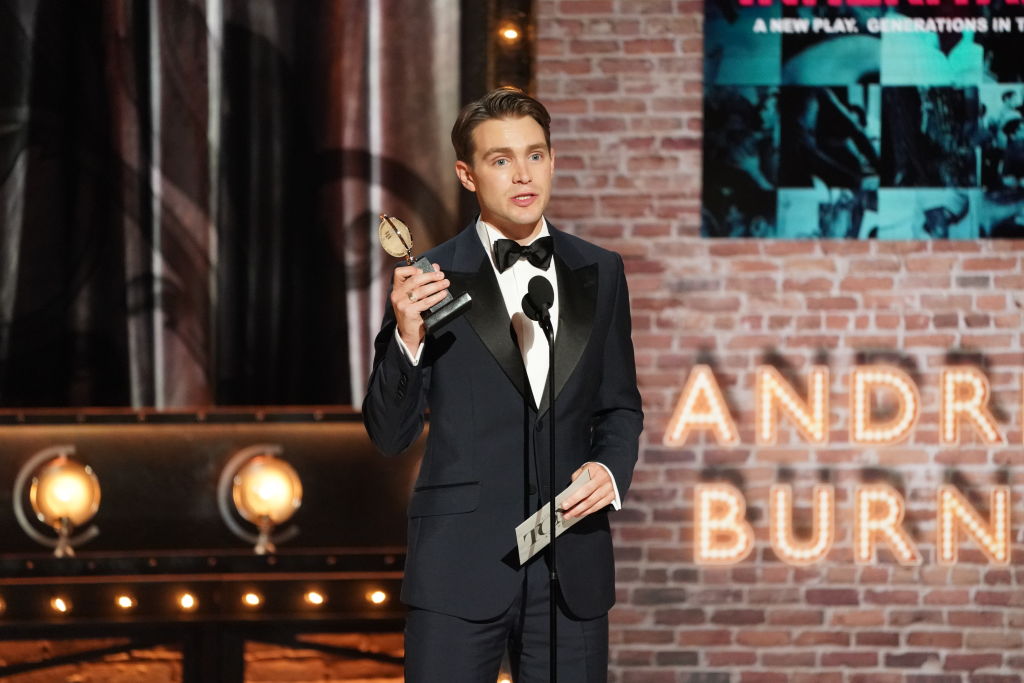 “To the University of Rhode Island theatre department,” Andrew Burnap ’13 said in his list of thank yous during his acceptance speech of Best Performance by a Leading Actor in a Play at the 74th Tony Awards on Sept. 26.

Burnap took home the award in an incredibly contested category –– his competition included Academy Award nominee Jake Gyllenhaal and Golden Globe winner Tom Hiddleston –– for his performance as Toby Darling in Best Play winner “The Inheritance.” Burnap originated the role when it opened at the Young Vic Theatre on the West End in March 2018 and then made his Broadway debut at the Ethel Barrymore Theatre when it transferred across the pond in November 2019. Matthew Lopez’s play is inspired by the 1910 novel “Howards End” by E.M. Forester and reinvisions Forester’s work to center around the lives of young gay men in New York, who are of the generation that came after the height of the AIDS crisis.

Rachel Walshe, assistant professor in playwriting and acting at URI, was in the audience for the play’s final performance on Broadway, the day before the industry shutdown on March 12, 2020 as a result of the COVID-19 pandemic. Burnap was a senior during Walshe’s first year as a professor at the University, and he was a student in her playwriting class.

“What he brought to [‘The Inheritance’] was a high-wire act in my mind, emotionally and physically, and all the things he’s extraordinarily good at,” Walshe said.

Following the shutdown, Burnap came back to URI as a guest artist to teach underclassmen theatre acting classes. Juniors Darby Wilson and Riley Nedder, who took his acting class last spring and spoke highly of Burnap and his teaching, pointed out how accommodating and sensitive he was to the needs of his students.

“He’s a brilliant teacher,” Wilson said. “He just knows how to connect with people, and he’s just such a genuine guy.”

While Walshe was first introduced to Burnap as his professor, their relationship has grown into a friendship over the years since he graduated, and she called him “the most gracious person.”
As someone who teaches, Walshe said she was filled with great pride for Burnap and that moments like this make every second worth it. Though she also said she takes no credit for the award-winning actor that Burnap is today, she also wasn’t surprised he thanked the University in his speech.

“Even though he deserves all of the credit, he is the kind of person who immediately shares that credit as wide as he can and that just makes him a glorious human being,” said Walshe.

The whole department has shared in that appreciation and pride. Nedder even said that their current acting instructor, Jeffrey Church, affectionately named the week following his Tony win, “Andrew Burnap week.”

According to Bonnie Bosworth, the department’s publicity director, it is believed that Burnap is the first URI Theatre alum to win a Tony Award for acting, which is not lost on faculty and students alike.

“It’s such an extraordinarily important statement, which is that a public university that is not audition-based produced a Tony Award-winning actor,” Walshe said. “And that means that any one of our students has the capacity and the potential to achieve what they set their sights on.”

To put things into perspective, all the other acting winners of the night who have earned BFAs, went to schools that require auditions for entry, even if they are public institutions. Burnap’s win isn’t just symbolic of what URI Theatre can produce, as Walshe said it reaffirmed her commitment to the power of public education. This is especially important in an industry that has faced much criticism for being elitist due to such things as high ticket prices for audiences and the standards performers must meet to “make it.”

“It gives a sense of like, this is something that is accessible to anybody,” Nedder said. “You don’t have to have all of the money to be at that level.”