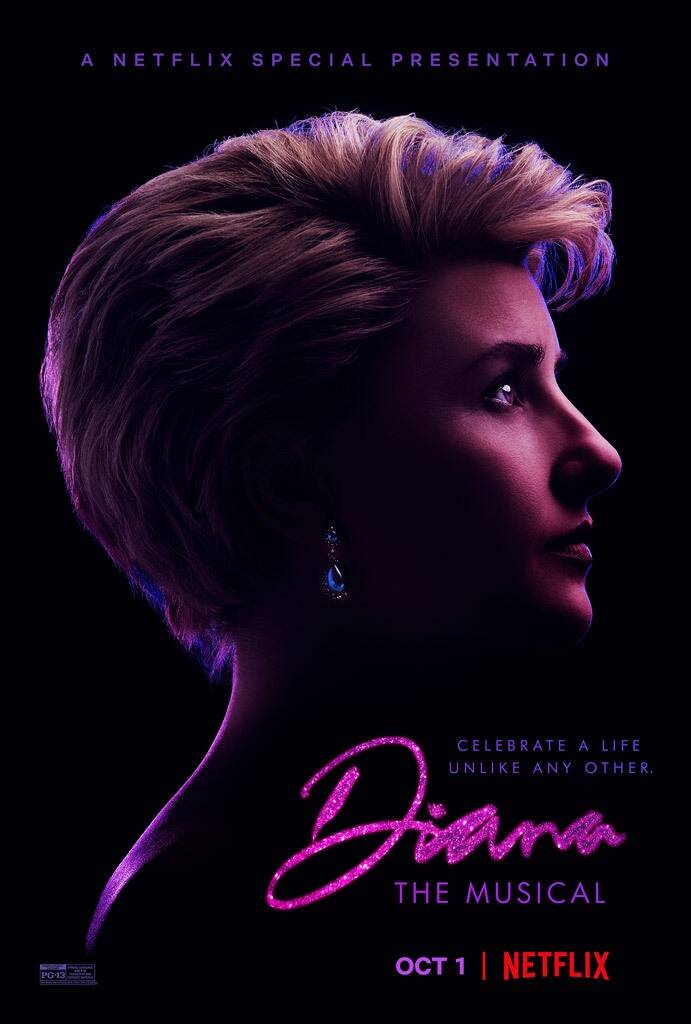 “Diana” the musical has shocked audiences, and not in a good way

Through every move, note and lyric in the nearly 2-hour musical “Diana,” I was left wondering why someone, anyone, in the creative process, from conception to a premiere in California to Broadway previews and finally a Netflix pro-shot release, didn’t simply ask, “why?”
Why take the tragic, overanalyzed story of Diana, Princess of Wales and make it into a musical with music and lyrics by a member of Bon Jovi? The obvious answer to that one is money, and clearly they’re making something with a Netflix deal, which leads me to the question Netflix should’ve asked. After such success with content on the Royal Family (“The Crown,” “The Royal House of Windsor,” “Diana: In Her Own Words,” etc.), why stoop so low as to this unintentionally campy, inevitable flop of a Broadway show?

The ultimate question that could’ve prevented me from spending my Saturday night watching “Diana” in horror and awe is, “why did we think people would ever respond positively to this show?”
When Tony Award winners David Bryan and Joe DiPietro aimed to hit big again with “Diana,” they decided to go the same route as they did with their 2010 show “Memphis” by premiering the show at the La Jolla Playhouse in San Diego in early 2019. Despite mixed reviews (which must have been generous if it resembled the final product that was put out on Netflix), a Broadway transfer was announced a few months later. The show was only able to go through part of their preview period at the Longacre Theatre before Broadway shutdown in March 2020. Netflix filmed the show onstage over the summer without an audience for release on Oct. 1.

It’s no secret that Broadway is an industry that has fallen prey to commercialism –– or rather has always been a product of commercialism, but people just want to complain more about it now because they have access to social media. A musical announcement about Princess Diana wasn’t exactly surprising, and neither was the following Netflix pro-shot, but it doesn’t mean it should’ve happened.

I am of the opinion that there’s really no need to musicalize the life and death of Lady Di, but the creative team could’ve at least attempted to do it in a way that would’ve left me wanting to give them an “A” for effort. However, after almost two hours of disappointment, I came to the conclusion that putting in the effort was what ended up being their downfall.

“Diana” was doomed from the start because the creators decided that not only were they going to make a musical about Princess Diana, but that they were going to make it a pop musical, trying their hardest to fit in numbers that could potentially be played on the radio or at least be fitting in a playlist full of works by the likes of Taylor Swift, Katy Perry and Adele. The lackluster result was songs in need of substance, but full of cheesy, metaphoric and laughable lyrics.

At one point, Diana even sings, “serves me right for marrying a Scorpio,” and that’s just one of the many Bryan and DiPietro lyrics that may make you think they were taking inspiration from a middle school girl’s diary. It’s also clear that they’re both American trying to imitate Brits, and not just any Brits, but the Royal Family. Queen Elizabeth II herself even says the line, “if I was interested in this type of sordid drama, I’d turn on ‘Coronation Street.’”

I also cannot skip over the song “The Dress,” all about the famous “revenge dress” Diana wore when Prince Charles appeared on national television to confirm his infidelity. There’s a painfully un-catchy hook that features the lyrics, “a feckity-feckity, feckity-feckity feck-you dress.” No, I did not just censor that for you readers, these are actual lyrics that were written down, given to an unfortunate group of talented actors, sung aloud, recorded and filmed for mass audiences.

There’s hardly anything redeemable about this mess, and the only way I can see the show becoming a mild success, or at least avoiding disaster when it finally gets its Broadway opening on Nov. 17, is if they stop taking themselves so seriously. It’s far too late now that it’s hit Netflix to switch up completely, but if the creators acknowledged the ridiculousness of opening the second act with Diana’s former lover James Hewitt rising from the bottom of the stage shirtless, sitting on a horse saddle and belting his heart out while romance novelist Barbara Cartland (who also happens to be Diana’s step-grandmother) narrates the affair, maybe they’d get the audience laughing with them, rather than at them.

While the lyrics and tone are the clear downfall, there are positives in lighting, choreography and performance. The songwriting duo’s seeming inability to write a ballad for female voices doesn’t do Jeanna de Waal (Diana), the iconic Judy Kaye (Queen Elizabeth II/Barbara Cartland) or Erin Davie (Camilla Parker Bowles) any favors, but the cast does its best with what they’ve got. When Bryan embraces his rock roots and gives de Waal something to work with in “Simply Breathe,” she truly shines. Tony-winner Kaye’s powerful voice is utterly wasted and Davie is left to impress only in the book scenes as “I Miss You Most on Sundays” and its undeserved reprise are perfect moments to take a bathroom break. Next to Josh O’Connor’s brilliant recent performance as Prince Charles on “The Crown,” it was hard for Roe Hartrampf to compare in “Diana,” but he surprised me with his choices. In neither the series nor the musical did I ever find myself completely sympathetic to the fillandering prince, but I was at least able to appreciate his character from an acting standpoint.

In her first originating role on Broadway, “Diana” should’ve been a big breakout role for British theatre actress de Waal, and somehow, I hope it still can be. She carries the show on her back, and for that I hope she can at least get some flowers and appreciation. It’s one thing to see an actor do great things with great material, but to see someone do the same with a script and score so shockingly bad was the only true joy I got out of the experience of watching “Diana.”
I’ll sum this long winded review by looking at how “Diana” decided to sum up their show. The final line, started by Prince Charles and then joined by the entire company after Diana’s death is announced is, “the people who will change the world are not the ones you think will change the world.”
Need I say more?