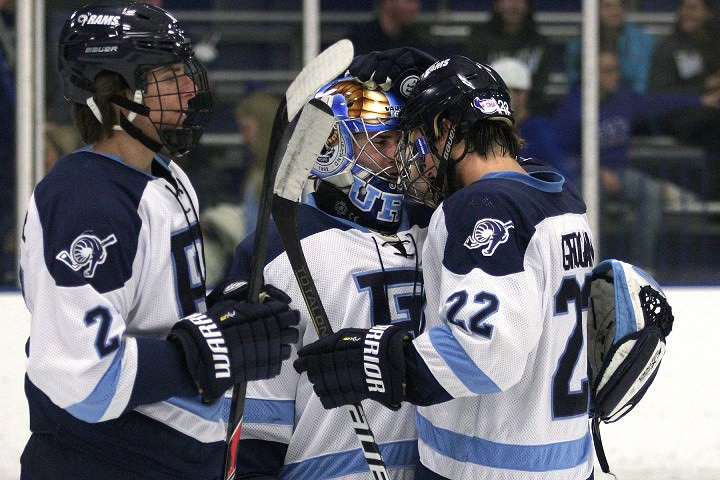 The men’s hockey team came up short in both games of their weekend series against No. 19 Pittsburgh. PHOTO CREDIT:urihockey.pointstreaksites.com

The University of Rhode Island Men’s Hockey team returned to the Boss Ice Arena last weekend, dropping both their games to the University of Pittsburgh and falling to 1-3 in their first action at home since Feb. 22, 2020.

The Rams rallied in a high-scoring game on Friday, coming up short in a 5-3 effort. Saturday’s rematch was a much more defensive matchup, but the Panthers never trailed, winning 3-1 to sweep the two-game series.

Despite the results, the Rams are happy to be back at home and in front of fans.

“Last year, we didn’t even have any games,” junior forward Luke Judge said. “To go from no games to having games and fans and friends and family here, it was definitely awesome.”

In the first matchup between the two teams, Pitt quickly gained the momentum. The Panthers scored their first two goals less than two minutes apart to open up a quick lead in the first period. Sophomore forward Thomas Fagan responded quickly, finding the top corner of the net to cut the Pitt lead to 2-1.

Rhody started to pick up momentum at the end of the first period. The Rams were awarded a power play that extended into the second, opening up an opportunity for junior defender Mike Costello to score and knot the game up at two.

Pitt later added two more goals, including a late power play goal to put them up 4-2. The Rams scored again in the third period on a goal by sophomore defender Jonathan Shaw, but an opportunity with an empty net at the end of the game ultimately allowed the Panthers to pull away.

“We have to work on our defensive zone,” Head Coach Joe Augustine said. “There were times we played very well, but in our own zone we gave them some goals that were kind of like gifts.”

Both games against Pitt featured a different starting goalie for the Rams. With a lack of experience at the position, Augustine has rotated both sophomore Curtis Briggs and freshman Callum Burgess at net this season. Rhody also has freshman Steven Turner and sophomore Timothy Brillaud on the roster.

“This is the first time in my 32 years that we’ve had four goalies and none of them have any college game experience,” he said. “Until you put people in and let them play a little bit and try to figure out who’s who, you don’t know until you let them go.”

Augustine added that he thought both Briggs and Burgess played well, saying that most of the goals the two allowed were “rebound goals,” where they were not beaten on the first attempt.

Briggs started on Friday night, while Burgess was given the nod for Saturday’s matchup. Although the latter gave up less goals, the result remained the same.

Similarly to the first matchup, Pitt jumped out to a two-goal lead quickly in the first period, with both their goals coming less than three minutes apart.

Rhody quickly regrouped afterwards, holding strong defensively until an empty net goal at the end of the game. But their effort was not enough, as a second goal on the weekend by Costello was the only score the Rams were able to muster as Pitt closed out another two-goal win.

“Finding the back of the net with the shots that we had is definitely something that we can work on,” Judge said.

The Rams will remain at home next weekend to face their first league opponent in Drexel. According to Augustine, getting off to a quick start will be crucial to the team’s success in their next stretch of games.

“Everybody is really good now, there’s no weekends off,” he said. “It’s going to be a grind, just like it was against Pittsburgh.”

URI will host the Dragons at Boss Arena on Friday at 7 p.m. and Saturday at 4 p.m. Both games can be streamed live on the Fanz Only Sports Network.