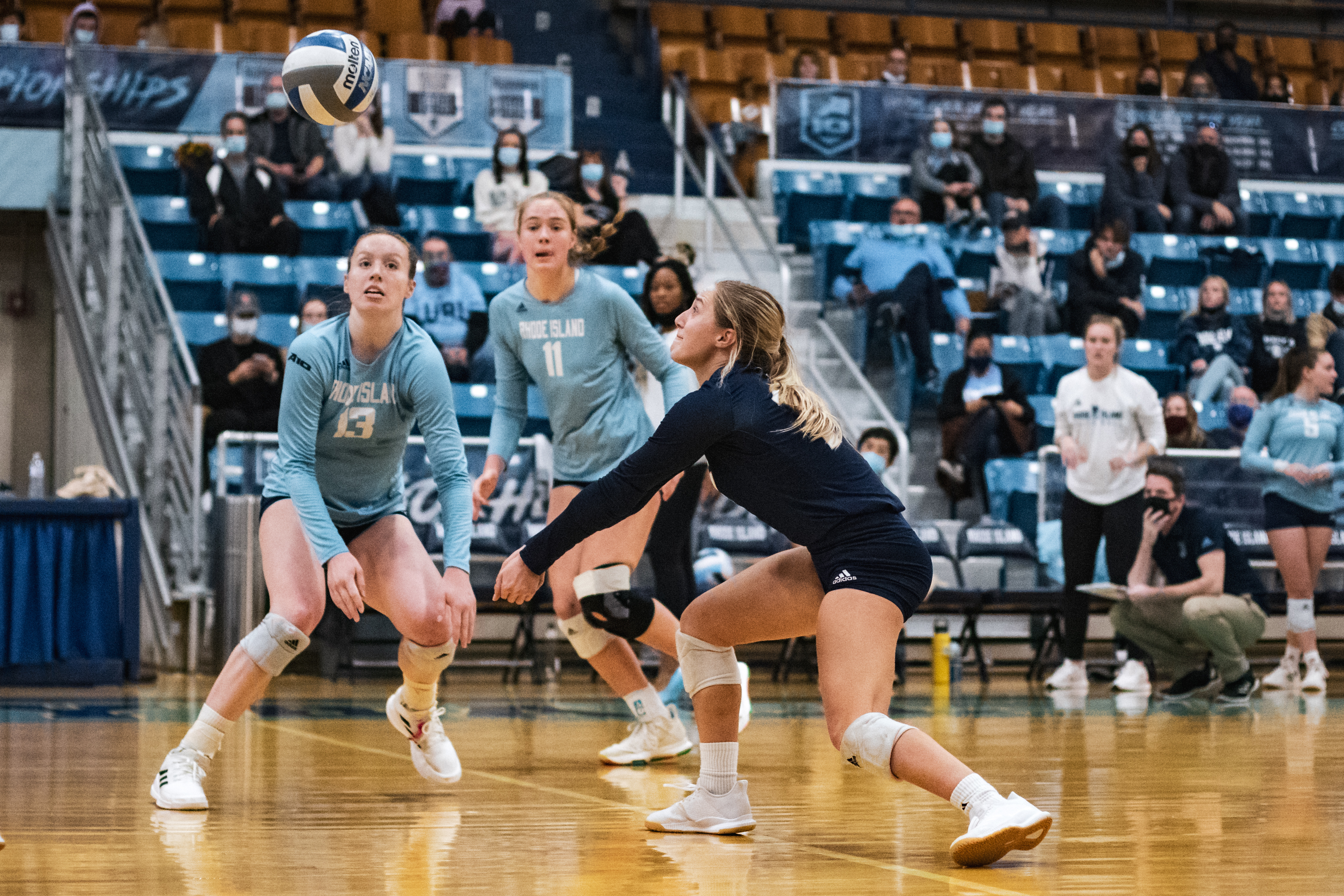 Year One of the Angel Agu era concluded with a bittersweet victory at home against Fordham. PHOTO CREDIT: Siobhan Richards

The University of Rhode Island Women’s Volleyball team concluded it’s regular season this past weekend, splitting matchups against Fordham University in a battle for the sixth and final spot in the Atlantic 10 Tournament.

The first match of the weekend began on the road where Rhody took a 3-0 defeat to Fordham. They got off to a slow start, falling behind early before losing the first set 25-11.

In the second set, Rhody came out strong with an early 9-7 lead, but Fordham put together a 7-2 run of their own to take a 14-11 lead. From there, it was touch and go for URI, but Fordham captured four of the next five points to separate themselves and win the set 25-20.

In the third and final set, the two teams battled it out once more. After a Brynne Wright kill put Rhody up 19-18 late in the set, Fordham used another late run, scoring seven of the final eight points of the set to take the 3-0 victory.

Junior outside hitter Claire Wagner, was the only player from the Rhody to earn double digits on the attack with her 11 kills. Freshman Grace Hammond racked up 21 assists and senior libero Ella Ratzloff contributed 13 digs.

Sunday’s matchup was bittersweet with Rhody winning 3-1. They needed to sweep Fordham to earn a spot in the conference tournament, but they would fail to do so after dropping the third set.

Rhody began set one with lots of energy for their last home game of the season. Wagner recorded five kills for URI in the set to give them a five-point lead early on. URI continued this trend as they kept a steady lead throughout the first set. Hammond eventually closed out the set with a kill to give Rhody a 25-15 victory.

Similar to the first set, Rhody was in control for the very beginning, never trailing at any point. Fordham brought it as close as 13-9 midway through the set, but URI stretched their lead and didn’t look back, winning the set two 25-13.

With a playoff spot on the line, the two teams battled it out in the third set. The set started off with an early tie 8-8 and was back and forth until Fordham responded with a 5-1 run to make the score 20-15. URI struggled to close the gap, losing the set 25-19.

The fourth set was the most competitive of the match with eight ties and four lead changes. URI broke the 17-17 tie with two aces from Hammond and kills from graduate student Jaime Smith and senior Mariah Paulette. The Rams won 25-20 ending their season finale on a high note.

Emotions were high after Sunday’s matchup as a handful of women played their last game in Keaney blue.

“It’s definitely hard, but it doesn’t feel like a win right now,” Ratzloff said. During the match, she became the first URI player to have 1,500 digs in her career.

Head Coach Angel Agu empathized with the girls as she was also saddened to see their season come to an end.

“You know, we did come up short; it was not the result that we wanted,” she said. “One of [our] goals was to go to the A-10 championship, but at the end of the day I told them there is so much to be proud of despite that. I think this team created a stamp for Rhode Island Volleyball moving forward and I think future teams are scared to play us.”

The team ended the 2021 season with a record of 13-19 overall, their most wins since the 2015 season. With new additions to the roster and a full year to acclimate, Agu and the returning players are excited for next year.