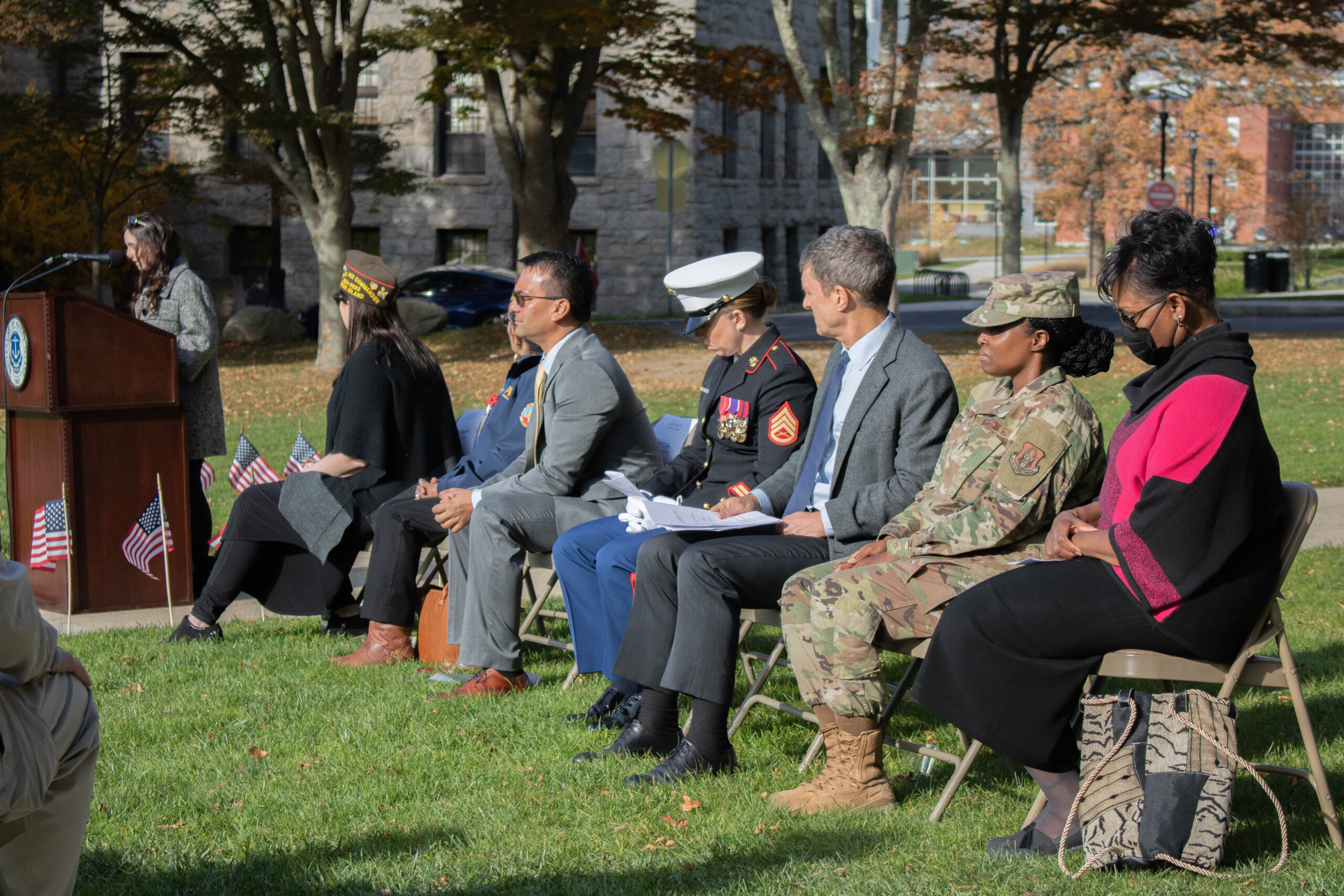 Armistice Day, known to many as Veterans Day, is a day that holds a lot of meaning to the University of Rhode Island’s Student Veterans Organization.

To celebrate Armistice Day, veterans, community members and students gathered in front of the American flag on the Quad on Nov. 11 for a ceremony honoring veterans.

The ceremony started with Delight Bucko, a graduate assistant to the veteran affairs and military program officer, speaking about the purpose of calling the holiday “Armistice Day” rather than “Veterans Day.”

“If you are wondering what the word armistice means, it is an agreement made by opposing sides in a war to stop fighting at a certain time,” Bucko said. “Armistice Day commemorates every year on the 11th of November to mark the armistice signed between allies of World War I in Germany and France at 5:45 a.m.”

Bucko went on to introduce Rachel Garcia, the veteran affairs and military program officer, who announced the theme of this year’s ceremony, “she/her/hers, they/their/theirs, he/him/his.” The theme celebrates intersectionality in U.S. veterans. URI’s Army ROTC performed the posting of the colors ceremony.

URI President Marc Parlange spoke about the importance of veterans in the URI community.

“URI currently enrolls close to 300 military veterans or active military and about 140 military dependents,” Parlange said. “Please, never hesitate to reach out to the office of veteran affairs and military programs who are here to support you.”

Vasquez-Hellner, a URI graduate, discussed her experiences as a veteran attending the University. She admitted that she envied the support and resources that student veterans currently have at URI.

“I will tell you that there were many days that I was lost,” Vasquez-Hellner said. “I was lost because I did not have anyone that spoke the same language as me as a veteran. I would’ve loved to just have that camaraderie. That network is so powerful for all of these veterans that are here today.”

Patricia Crawford, a first lieutenant in the U.S. Air Force, spoke about some of the lessons that she learned being in the military, and how important it is to her to carry out the legacy of her late brother, Staff Sgt. James Jerome Crawford.

“I learned what teamwork means,” Crawford said. “When I put on this uniform, I learned that life is so much bigger than just me. I learned leadership and I learned how to work with people from all different backgrounds and nationalities.”

The last speaker of the day, Chaplain Rotunda East, a U.S. Air Force veteran, gave a speech about how civilians should treat veterans when they come home from their deployment.

East also recognized various female veterans who made history, such as Elsie Ott, the first woman to receive the U.S. Air Medal for her service as a flight nurse.

“The only way I can introduce myself today to you is as a female veteran who continues to serve our country by taking care of it,” East said. “I introduced myself to you this day as a representation of all the females who paved the way for me.”

To end the ceremony, Jonathan Star from Navy Band Northeast played “Taps” on the bugle, a symbol in the U.S. military to remember those who gave their lives in service to the United States.

The URI Office of Veteran Affairs and Military Programs offers support to all students that are active members of the military, veterans, or military dependents.