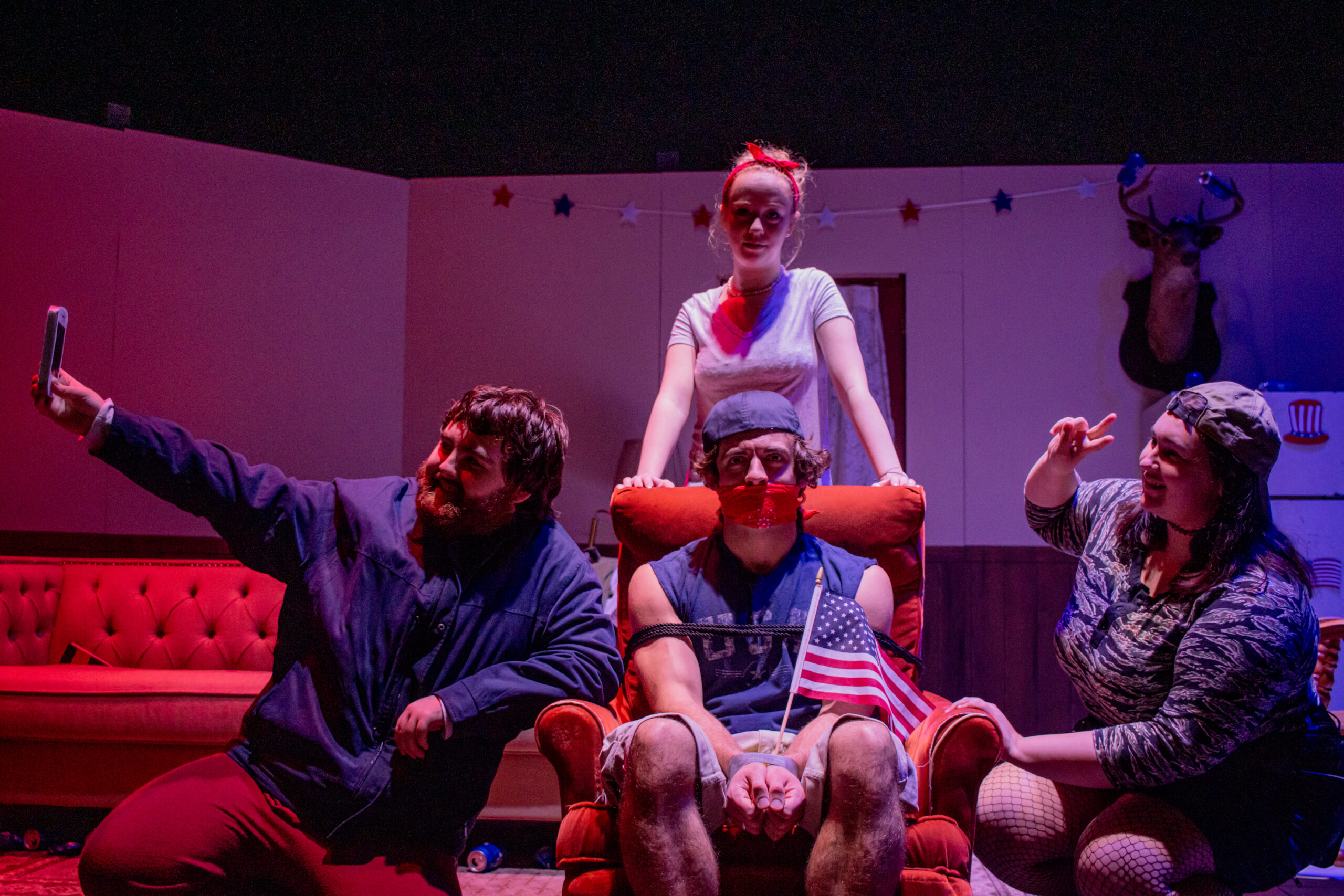 URI Theatre addressed the different ways abuse can present itself with “Exit, Pursued by a Bear.”  PHOTO CREDIT: Greg Clark

What do you get when you put together Jimmy Carter quotes, karaoke, Susan Boyle, bottles of honey, numerous fourth wall breaks and an entirely student-run production? Apparently, lots of laughter.

“Exit, Pursued By a Bear” is a brilliant, hilarious one-act play from playwright Lauren Gunderson, who has become a University of Rhode Island Theatre favorite, as productions of “Silent Sky” and “I and You” have also recently graced URI’s stages. Directed by senior Mackenzie Blake with both cast and crew made up of only students, the show ran for just three performances last weekend, but it was a treat for all who were able to see it.

With a title taken from one of William Shakespeare’s stage directions, “Exit, Pursued By A Bear” tells a story within a story on July 4, 2011 in northern Georgia. Nan Carter, after six years with her abusive husband Kyle, decides to both teach him a lesson and leave him on through the help of her gay best friend Simon and a stripper/actress named Sweetheart. The trio tape Kyle to a chair and force him to watch as they break the fourth wall and reenact different scenes from their abusive relationship. For the grand finale, they plan to cover him in meat and honey to attract a bear to maul him to death.

While it may not sound like a comedy on the surface, the audience in J Studio could not stop its laughter and applause. They were only silent in the few powerful, incredibly serious scenes, in which domestic violence was confronted and portrayed head-on.

In a director’s note in the playbill, Blake wrote about how she related to the character of Nan and the importance of both of their stories is why she chose “Exit” specifically for her proposal for the annual THE 420: Advanced Directing project, which is awarded to a qualified directing concentrate by the URI Theatre faculty.

“I want this play to spread awareness in the different ways abuse can present itself,” Blake wrote. “It is important to know what abuse looks like and be able to ask for help.”
Along with the note, Blake and her team added information for The National Domestic Violence Hotline as well as a content warning for depictions and mentions of domestic abuse and violence, as well as mentions of gun use and use of a prop gun. These warnings were repeated in the pre-show announcements as well.

While J Studio can potentially seat about 250 audience members, “Exit” only sat 60, providing for an incredibly intimate experience that involved only one set, designed and built by senior Erin Doyle. Before the lights dimmed and the actors appeared, the scene was already set, with beer cans littered across the floor, peeking out from underneath a couch and atop the antlers of a stuffed deer above the fridge.

When they did appear, the small cast of four was able to take advantage of every moment of stage time they got, each presented with their own monologues that allowed them to connect with the audience and a script that provided a range of emotions to play. It is clear through this and other productions why URI Theatre keeps returning to Gunderson’s work.

You couldn’t help but root for transfer student Tricia Snell as Nan Carter, even though her plan was definitely a bit on the insane side and her idolization of the 39th U.S. President Jimmy Carter, who she said she wished was her father, bordered on odd obsession.

From the moment Snell first addressed the audience in her jean shorts and plain T-shirt, she rawly and beautifully bounced quickly between humor, anger and devastation to really capture Nan’s character.

On the other hand was Kyle, played by junior Peter McGreen, who was so hilariously stupid that it was even endearing at moments. While it wasn’t hard to see his charm and why Nan stuck around for so long, McGreen was just as solid in the serious moments as in the lighthearted ones, reminding us of the production’s purpose as stated by Blake.

Sophomore Jenna Goulart and senior Alex McGreen earned some of the biggest laughs of the night as Sweetheart and Simon respectively, as both were obvious masters of physical comedy. Goulart also had the pleasure of playing “Super Kyle” as her character in most of the reenactments, showing off both her and Sweetheart’s acting chops. McGreen got the first mid-show applause when he entered through the audience in a cheerleading uniform, ready to pump up Nan and show his disdain and hatred for Kyle.

Throughout, as the plan kept getting derailed and the theatrics continued, it was hard not to let your eyes glance to the venison defrosting on the floor by Kyle’s feet, waiting for a bear to make its grand entrance. I won’t spoil the ending, but I can say it’s certainly unexpected and worth the wait.

My only wish is that more people could have gotten to see the work of these brilliant students last weekend in its amazingly hilarious, intimate, poignant, powerful and, unfortunately, short-lived run.