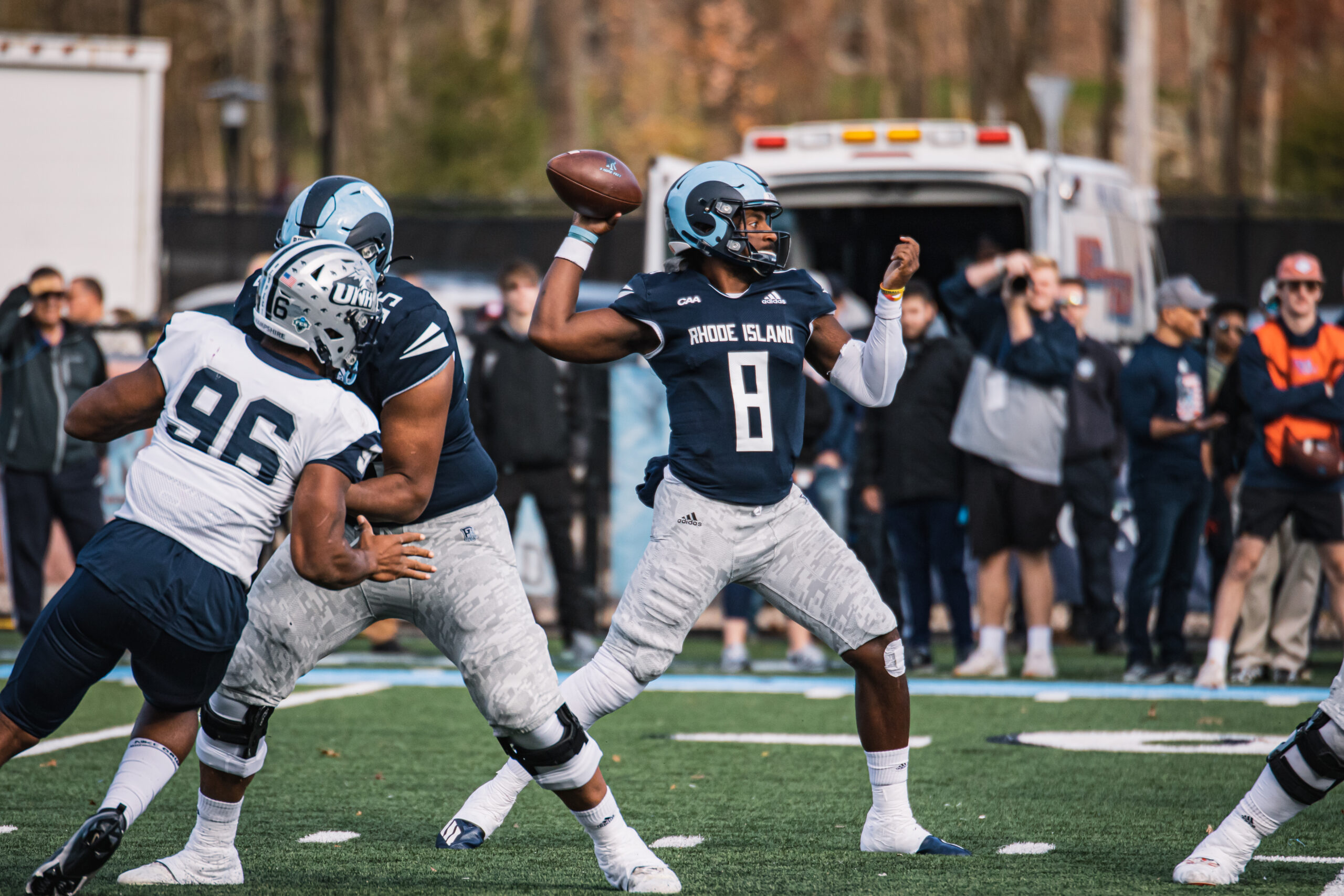 Here are the Cigar’s picks for the fall sports MVPs.

This fall, the University of Rhode Island Rams put together their best season since 2001 and a big reason why was the play of redshirt junior quarterback Kasim Hill. Whether it was through the air or on the ground, the signal caller played a crucial part in the Rams’ third-ranked offense in the Colonial Athletic Association (CAA) this season. Hill finished the year with 2,431 total yards and 24 total touchdowns. His impact was most apparent in the Governor’s Cup game against Brown where Hill went 13-for-19 passing for 351 total yards and four total touchdowns. The performance helped him earn CAA Offensive Player of the Week honors and the New England Football Writers Association (NEFWA) Golden Helmet, an award given to the best collegiate football player in New England that week. With one more year of eligibility remaining, Hill will look to get the team to a place where they fell short this past season––the Football Championship Subdivision (FCS) playoffs.

Last spring, we got a sample of the impact that redshirt junior forward Patrick Agyemang can have on the Men’s Soccer team. This season, he proved himself as one of the best players in the Atlantic 10, finishing with 10 goals (third-most in the A-10) and six assists (eighth-most in the A-10). He was spectacular against in-state foe Brown University on Sept. 15 when he recorded the program’s first hat trick since 2013 in a 3-1 win. He also played a crucial part in the team’s 3-1 win in the A-10 quarterfinals where he contributed to each of the team’s goals. For his efforts this season, Agyemang earned All-Conference First Team honors and was named to the College Soccer News Team of the Week on two occasions.

A source of consistency in an injury-riddled season, forward Brooke Cavino helped to not only step up when her teammates missed time, but also helped lead her squad to their first Atlantic 10 tournament appearance since 2016. Playing in all but one game this fall, Cavino led the Rams with four goals and 10 points on the season. The junior shined in her team’s matchup against Duquesne on Oct. 17, finding the back of the net twice and scoring the game-winning goal in a 2-1 Rhody victory. She also played a big role in her team’s Oct. 3 win over Fordham, picking up a goal and an assist in the effort. Returning for her senior season in the fall of 2022, Cavino’s strong presence on offense will be key for the Rams as they look to pick up from where they left off in 2021.

While Rhody volleyball just missed out on making the Atlantic 10 tournament, the 2021 season will be looked at as a historic one thanks to the contributions of Ella Ratzloff. In her final season with the program, the senior libero shattered the program’s all-time digs record, finishing her Rhody career with 1,517 digs––even after an abbreviated 2020-2021 season. A native of Woodbury, Minnesota, Ratzloff also set URI’s new single-season record in digs with 570. Besides her contributions to the record book, she was named A-10 Defensive Player of the Week on Oct. 25 while also earning All-Academic honors for the second straight year. One of Ratzloff’s signature performances came in Rhody’s last win of the season over Saint Louis on Nov. 7, where she recorded 28 digs and nine assists in a 3-1 win over the Billikens.

For long distance runners, it takes a consistent pace––not a sprint––to get to the finish line. The same could be said for Eric Zulkofske’s senior season. His second straight season as a captain, Zulkofske put in extra work during meetings and practices during the week on his way to yet another impressive season, according to Assistant Coach Brian Doyle. The senior runner led the way in three of the Rams’ meets this season, including a season-best 16th place (25:14.7) in the New England Championship on Oct. 9 and a 21st place finish in the Atlantic 10 championship with a time of 25:33.8. The Stony Brook, New York native was also Rhody’s top finisher in the Nassaney Invitational 5K (ninth place, 15:28.7) and the Battle of Beantown (16th place, 25:14.7). His final run was in the NCAA Northeast Regional, coming in 97th and second among six URI participants.

Making the transition from high school to college athletics isn’t always easy, but some athletes make it look easier than others. That was the case this fall for freshman Madeline Till, who made an immediate impact in Kingston. The Towson, Maryland native was stellar for the Rams this fall, finishing as the team’s top finisher in four of their six meets. Her best performance of the season came when it mattered the most at the New England Championships when she finished with a season-best time of 19:07.4. She was also one of four Ram runners to compete at the NCAA Northeast Regional in Buffalo last month––a fitting accomplishment for an outstanding season.