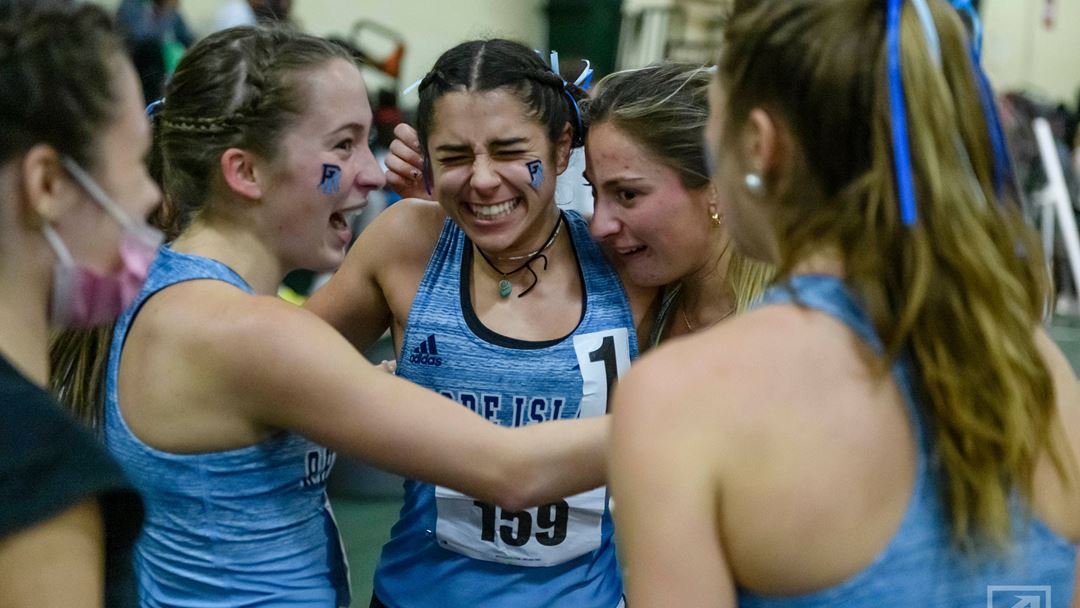 Senior Becca Durham celebrates with her teammates during this weekend’s A-10 Championships. PHOTO CREDIT: gorhody.com

The University of Rhode Island Women’s Track and Field team traveled to Fairfax, Va. over the weekend to compete in the Atlantic 10 Indoor Track and Field Championships, where they finished seventh with 59.5 team points.

Senior Bethany DeLoof came in third in the 500 meter, clocking in at a season-best 1:14.61. Although she had her sights set on first place, she was satisfied with her effort on the track.

“I definitely gave it my all in that race, really tried as best as I could,” DeLoof said. “I actually fell across the finish line and collapsed at the end and we were kind of saying before the meet that one of our team goals was to leave it all on the track. So I was joking that I literally left it all on the track, and accomplished that goal.”

Among the other individual races, senior Xiana Twombly finished seventh in the 200 meter, coming in at 25.31 seconds. Senior Becca Durham finished fourth in the 1000 meters with a personal-best time of 2:53.81. Trinity Smith and Ciara French competed in the 60 meter hurdle finals, finishing fourth and sixth respectively. Smith came in at 8.67 seconds, while French beat her time from last week’s Brown Invitational, finishing in 9.20 seconds.

“During that race, it felt really good.” DeLoof said. “It was just like, really exciting, too, because since it’s the last race of the meet, everyone’s watching [and] everyone’s cheering.  We had all my teammates lined up and a huge wall along the outside of the track, just chanting ‘URI’. So yeah, definitely really exciting and I was very happy with how that race went.”

URI didn’t only win points on the track. In the high jump, Bolu Taiwo earned her first-ever A-10 podium finish, earning silver with a personal-best jump of 1.67 meters. Twombly finished fourth in the long jump with a 5.69 meter leap. Erynn Field finished fifth in the weight throw with a distance of 17.50 meters and a 3.50 meter throw was enough to see Sydney Shannon tie for fifth in the pole vault.

After not being able to compete in the A-10 Championships last year, Head Coach Laurie Feit-Melnick was happy with her team’s performance going into next weekend’s ECAC championship meet.

“We really had a very good meet,” she said. “It’s a very, very challenging meet on the women’s side and we had numerous personal-best performances.”

Feit-Melnick feels her team is well-prepared going into the Eastern College Athletic Conference (ECAC) Championships, their final indoor meet of the season this weekend.

“At this point in the game, the people that are competing this coming weekend have earned a spot to compete, meaning that you have a standard that you have to reach to even get into the ECAC championship.” Feit-Melnick said. “So they’ve earned that spot and it’s all about getting experience as well.”

The ECAC Championships will take place in Boston, beginning on Saturday at 9 a.m. Both the men’s and women’s programs will compete in these championships to conclude the indoor track and field season.