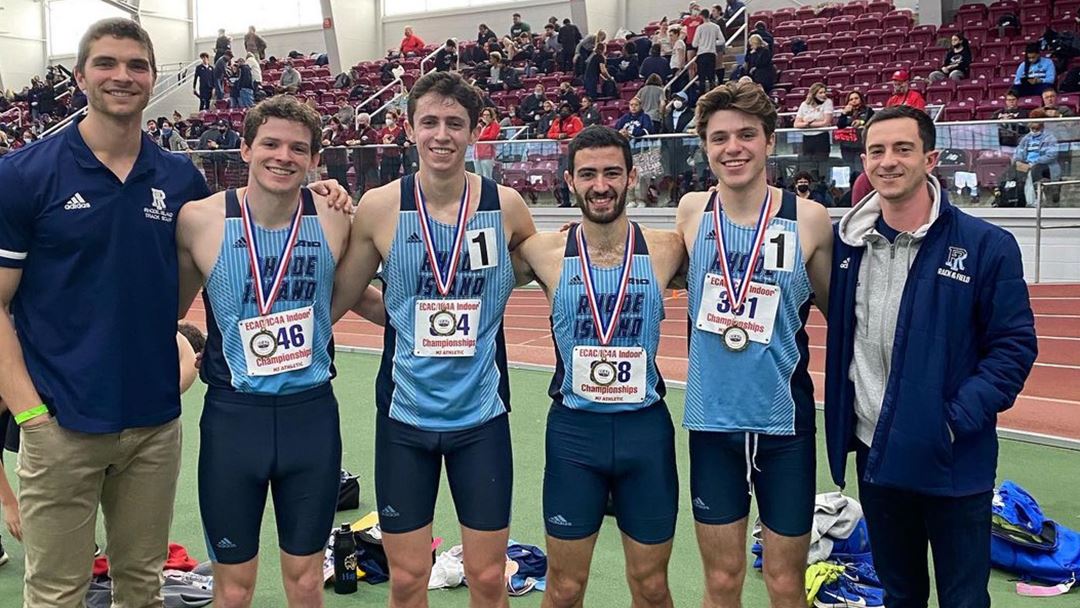 Trent Baltzell poses with his 4×800 relay team after the record-setting win this past weekend. PHOTO CREDIT: gorhody.com

The University of Rhode Island Men’s Track and Field team ended a successful indoor season in historic fashion this past weekend.

The team competed at the IC4A Indoor Championship in Boston and wrote their name into the history books at URI. The 4×800 meter relay team of Tyler Rubush, Liam Creeley, Collin Ochs and Kellen Waters beat a record set four decades ago.

For Rhode Island Men’s Track and Field coach Trent Baltzell and the team, this was a meet in which he described that the team had to dig up deep and put in a lot of effort after their Atlantic 10 championship win the weekend prior.

“We were pretty flat after our A-10 win,” Baltzell said. “We put a lot of effort into that meet and not sure how much we really had left in the tank going into this weekend”

Along with rewriting the history books at URI, they also put themselves in IC4A and NCAA history forever.

“To be a part of history is a special thing,” Baltzell said. “I found out that it was the sixth fastest time in IC4A and second fastest time of the year in the NCAA. It is our fifth school record of the year, second relay record. I think those are special because the guys get to share them together.”

Getting to set a program record was an objective Waters and the relay team set for themselves.

“The goal going in was to get the school record,” Waters said. “Beating it by five seconds is a pretty good thing and a really good closure to the season.”

Waters was an integral part of helping URI get to this point, and during the meet, he set a personal record as well. He ran a personal best 1:49 during his leg of the 800 meters.

“I ran a massive personal record in the 800’s, running at 1:49,” Waters said. “I was pretty shocked when that happened. I’m still ecstatic and can’t get over it.”

This is Baltzell’s first year at the helm and first-year coach has earned the support and respect of the team from the beginning.

“It just shows all the work we have been putting in,” Waters said. “It is a good group of guys that got the record and that knew that it was possible. Proving it to ourselves is a pretty big thing, but it also shows that we are trusting the process. As we have a new [head] coach this year, we have been behind him right away and supporting everything he’s doing for us.”

Additionally, Johnathan Buchanan came in second place in weight throw with a mark of 19.16 meters.

In the pole vault, Mason Brubaker finished in eighth place with a leap of 4.70 meters. Orion Joyner and Garrett Robinson finished in ninth place and 11th place respectively in the triple jump.

As the IC4A Indoor Championships came to an end on Sunday, so did the indoor season for the team. After a successful past few weeks, the team will shift its focus to the outdoor season which begins on April 1 at the Bryant Black and Gold Invitational.