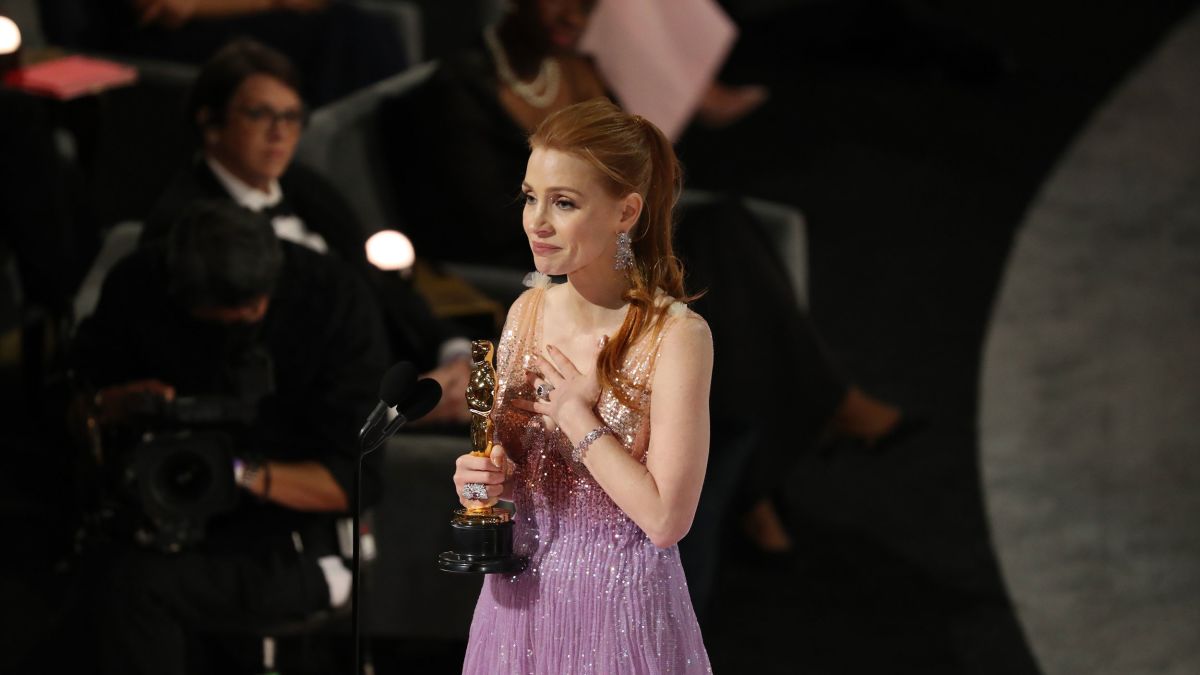 The third time’s a charm!

After two losses and 10 years after her first nomination, Jessica Chastain took home Best Actress at the 94th Academy Awards on Sunday, March 27.

Going into the ceremony, Chastain had the strength of a Screen Actors Guild (SAG) Award and Critics’ Choice Award on her side, but lost the Golden Globe to Nicole Kidman in an untelevised ceremony and failed to garner a British Academy Film Award (BAFTA) nomination. While previous wins in the season aren’t always an indicator for a win on Oscars night–just ask Glenn Close and Olivia Colman–Chastain certainly had a lead going in, even if it was a somewhat shaky one.

The nominees for this year’s Best Actress were Chastain (“The Eyes of Tammy Faye”), Kidman (“Being the Ricardos”), Kristen Stewart (“Spencer”), Olivia Colman (“The Lost Daughter”) and Penélope Cruz (“Parallel Mothers”).

It was a peculiar year for Best Actress as none of these films received one of the 10 slots for a Best Picture nomination. Basically, none of them were necessarily amazing films, at least according to the Academy voters. “Being the Ricardos” and “The Lost Daughter” both managed three nominations, while “The Eyes of Tammy Faye” received just two (of which they won both), leaving Stewart and Cruz as the sole nominees for their films, but, in my opinion, for vastly different reasons.

Stewart starred in “Spencer” as Princess Diana and she’s stunning in it. Watching her shine in a more serious drama almost 15 years after she became a laughing stock for her work in “The Twilight Saga” provided for a great narrative. However, “Spencer” is an awful movie and I cannot be convinced otherwise. The directing is all over the place, the script is a mess and outside of Timothy Spall, the supporting cast is given little-to-no material to work with. I’m not surprised “Spencer” earned just one nomination considering Stewart’s performance is the only redeemable part of her film.

On the other hand, Cruz would have made a fine winner, but she was being nominated for a foreign language film (“Madres paralelas” in Spanish). While the Academy has made a tangible effort to become more diverse after 2016’s #OscarsSoWhite, which included becoming more international in membership, it’s still hard for an international film to gain true traction in the acting categories. South Korea’s “Parasite” won Best Picture in 2020, but received no acting  nominations. This year, Japan’s “Drive My Car” received a Best Picture nomination and won for Best International Feature Film, but, again, no acting nominations. Cruz gives an amazing performance and was perhaps my personal favorite when looking at both the film at large and individual performance, but she was fighting an uphill battle that the other nominees weren’t.

“The Lost Daughter” was probably my favorite film of the five, but Colman doesn’t give my favorite performance in this film. Instead, that distinction goes to Jessie Buckley, who earned a Best Supporting Actress nomination for portraying the younger version of Colman’s character. Colman was brilliant as always, but Buckley blew me away, and it’s hard to make a case for yourself when you’re being somewhat outdone by your co-star in the very same role.

“Being The Ricardos” probably should have and could have been more beloved by the Academy when you look at it on paper. A biopic about beloved Hollywood stars written and directed by Aaron Sorkin and starring Nicole Kidman and Javier Bardem? Sounds like a winner to me! However, I’ve learned that you should never underestimate Sorkin’s ability to get in his own way. Kidman was better than I thought she’d be, though her accent was predictably inconsistent, but she was still playing a largely unfunny Lucille Ball thanks to Sorkin’s script. What Kidman did have going for her was that she’s a beloved actress who has only one win in five nominations and hasn’t won since 2002. Yet, it proved not enough to overcome Chastain.

When Jessica Chastain won the SAG Award, to even her own surprise, it became more clear to me that it was Chastain’s year. As I mentioned before, she’s already lost twice, and while she might not be as beloved or respected as Kidman, this was a win that felt overdue. It didn’t hurt that Chastain went through the most notable physical transformation to play Tammy Faye, something the Academy voters tend to love. It paid off for both her and the film’s hair and makeup team when they took home awards on Sunday.

“Tammy Faye” wasn’t my favorite performance of hers, and it certainly wasn’t my favorite film, but there’s clearly so much more than a performance that goes into an Oscar win, and Chastain hit all the right markers. She has been extremely gracious in her victories, giving enormous credit to her hair and makeup team and her co-star Andrew Garfield, as well as honoring her fellow Best Actress nominees. Personally, I also think Chastain was snubbed in 2017 for “Molly’s Game,” and I believe that others, like me, were just happy to see her back after a nine-year nomination drought despite solid work.

The 2022 Best Actress race was complex in some ways and simple in others, and at the end of the day, Oscar winner Jessica Chastain sounds pretty nice.