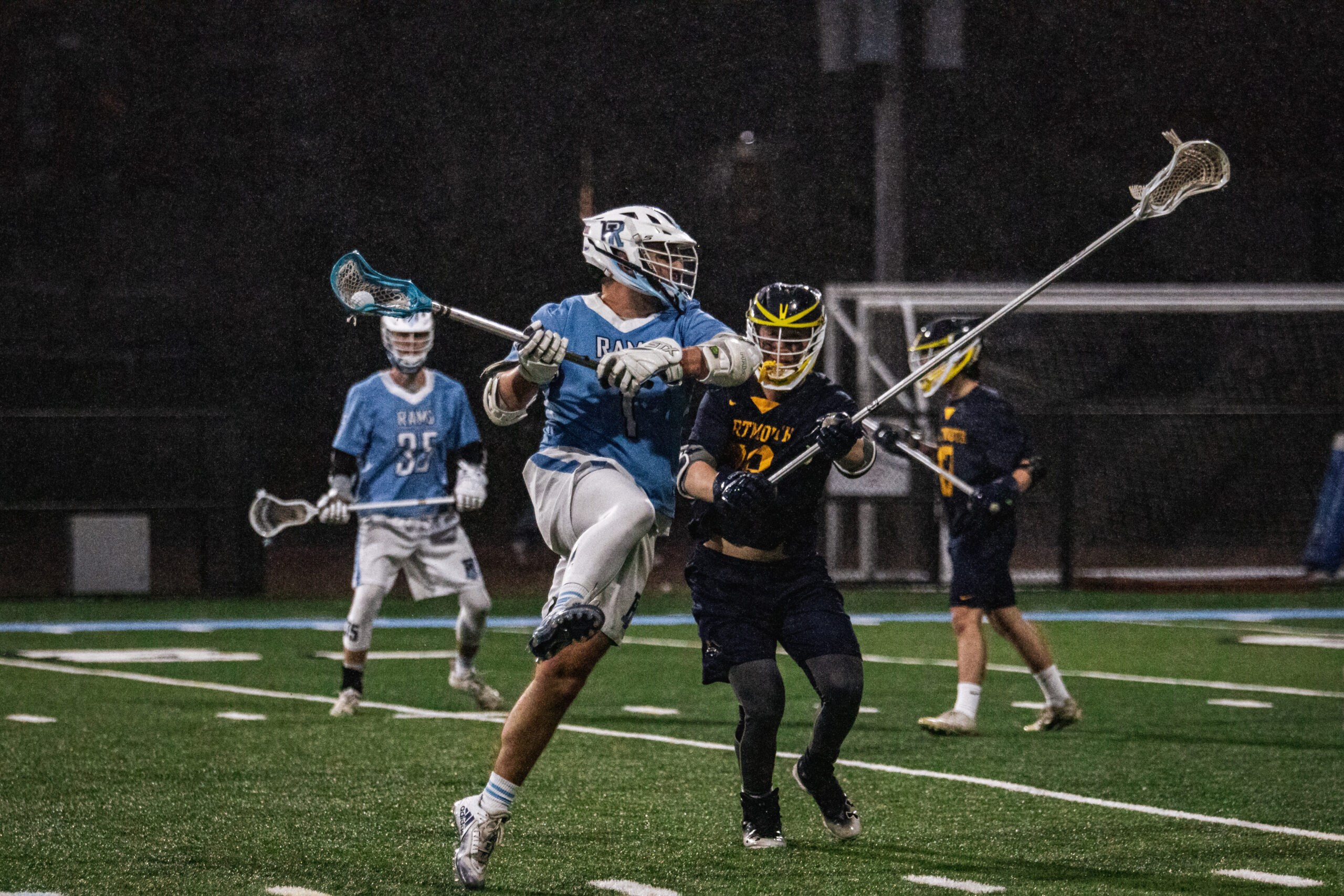 The University of Rhode Island Men’s Lacrosse team moved to 7-1 on the season (4-0 in conference) and retained their place atop Division II of the Continental Lacrosse Conference (CLC) when they defeated UMass Dartmouth 13-6 last Thursday.

The rain and wind came down hard at Meade Stadium when the two teams squared off. UMass Dartmouth got off to a fast start, opening the scoring on a man-up opportunity. Rhody came back with an incredible run of their own which started with senior attackman Jack Duffy, who wrapped around the net and flung a lefty shot into the bottom corner to tie things up.

One goal from senior captain Charlie White and two from junior Anthony Guarino made things 4-1 with seven minutes left in the first stanza.

Soon after, the Rams scored three goals in the next minute and a half of the quarter to head into the second quarter with a 7-1 lead. Sophomore midfielder Keegan Reilly scored the fifth goal of the game and that was followed by a long-range jumping bounce shot from White and a goal from Guarino.

Reilly opened up the scoring in the second quarter for Rhody, sneaking down the alley and slipping in a shot past the keeper to make it 8-1. They’d score one more before the Corsairs ended the bleeding with a goal of their own. Reilly was quick to respond, scoring his second goal of the quarter on a backhanded shot to give the Rams the 9-2 advantage at the half.

White started the scoring in the second half with a left-handed rifle into the top corner to make it a 10-2 game. A minute later, Duffy found Guarino who took a hit before burying the shot into the back of the net. The Corsairs scored once more, but Guarino and Duffy scored to make it 12-3 at the end of the third quarter.

In the fourth quarter, the Corsairs attempted to make a comeback, scoring three unanswered goals to cut the Ram lead to 12-6. However, a pass from Guarino found the stick of senior midfielder Tom King who scored and ended any chance for a comeback from the Corsairs. The Rams went on to win 13-6.

Guarino and Reilly led the attack for the Rams with Guarino logging four goals and two assists while Reilly posted three goals and three assists. White scored three goals of his own and Duffy tacked on two. The Rams won in large part due to their success with face offs. Junior Nathan Winter went 13-for-15 on the day and gave Rhody the opportunity to score their 13 goals.

Despite the way the team has been playing, White still feels like there is progress to be made with the end of the season looming.

With the CLC playoffs and 2022 Men’s Collegiate Lacrosse Association (MCLA) National Championships, which the Rams received the invite for after their previous win against Bridgewater State, approaching, Head Coach Larry Madeira says the team is feeling confident heading into the tournament in Round Rock, Texas.

“We are positioning ourselves well for the final three games and the CLC playoffs,” Madeira said. “We feel good about our chances going into nationals, we just need to lock in.”

The Rams will be tested once again when they take on UConn at home tonight with the game set to start at 7 p.m.