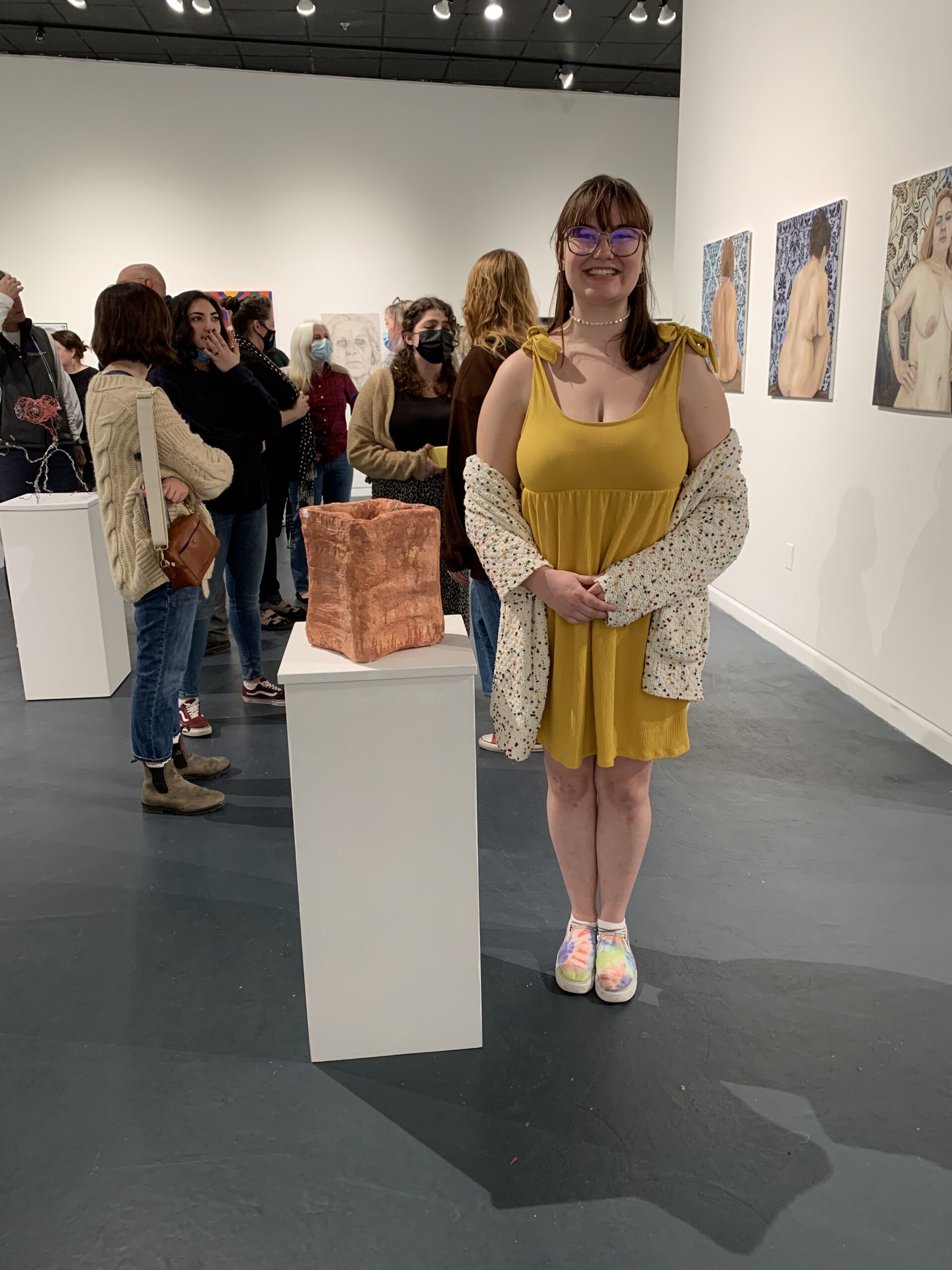 For Kaitlan Machado, a freshman history major at the University of Rhode Island, success isn’t a destination — it’s a journey of trying new things and discovering what she is passionate about.

Originally, Machado decided to pursue higher education at URI because of all of the great things she heard about the history program. In addition, living in Massachusetts, she has always loved visiting and exploring the Ocean State.

However, it wasn’t until she really integrated herself into campus life that she realized all of the opportunities that URI held for her.

In her first year, she has already joined both the Shark Club and the Art Club, has participated in stand-up comedy and is currently a featured artist in URI’s Juried Student Show open exhibition.

Hoping to soon declare a minor in art, Kaitlan joined URI’s Fine Arts Club last semester. Soon after joining, she was elected secretary of the club and now, in her second semester, she has been elected president.

Machado said that the club meets every other Thursday and although it is not a huge time commitment, it is something that is important to her.

“Organizing and helping the club has helped me just, like, refine my skills and just like, you know, be in a professional setting more often,” she said.

As secretary, Machado said that most of the work she did was behind the scenes, such as sending emails. However, as president, she said that she hopes to transform the club into a space where students can come, relax and make art, even if they are not art students.

“We welcome everybody,” Machado said. “I just want to keep making a club where it’s accessible to kids who just, like, want to hang out and just have fun and make art because [the club] has been a little smaller since COVID.”

In addition, Machado said that she joined the URI shark club so she could spend time learning and talking about something she finds intriguing.

“It’s something just, like, cool and fun to be a part of because the people are really nice,” she said. “Just finding that same community of people who like the same things as you is always nice.”

Machado said that she came into URI with 24 credits that she earned in high school, allowing her a lot of academic freedom in her first year.

Because of this, she has had the opportunity to explore her interests, such as comedy, art and anthropology.

Machado said that she took a basic-level sculpture class last semester and got to create 3D art, something that she had never done before.
Although this was new to her, she ended up creating a piece that will be on display in URI’s Juried Student Show open exhibition between now and April 26.

Machado said that originally, she envisioned this sculpture to be a tree, but as she worked on the piece, it turned into something more abstract.

“It’s this brownish box that I had coined the name ‘poop box’ just as a joke with my friends,” she said. “I thought it would just be really funny to submit it, you know, just as a joke, give the jurors a laugh. Then I got an email that it was going to be picked.”

Although she originally submitted the piece as a joke, she said that making this sculpture has shown her how much she likes the creative process.

“I honestly just really love making things with my hands and just like coming up with ideas from nothing,” she said. “I think that it’s been really fun and interesting and creative.”

Residing in the arts and humanities living and learning community on campus, she said that she is surrounded by plenty of talented students. This is what inspired her to try stand-up comedy for the first time.

“’I always wanted to try stand-up because a lot of people tell me that I’m pretty funny. I love making people laugh, but I’ve never done it in, like, that setting before,” she said. “I’ve been trying so many other different things this year and it is something I’ve always wanted to do, so, I  kind of, like, worked up the courage and finally did it.”

One of Machado’s friends, Sasha Avampato, a freshman studying education and Chinese Flagship at URI, said that she saw this creative drive in Machado the first time she met her.

“I met Kaitlan early on during fall semester after the football game and I remember her as being an extremely interesting and enigmatic person to be around,” Avampato said. “She has been extremely successful in utilizing URI’s resources- from art to comedy, she’s really found so many different creative outlets.”

Machado said that she considers herself on the “Rhode to success” because of her ability to carry and heal herself. In addition, she prides herself on her confidence and creativity.

“As long as I’m happy, doing something that I’m passionate about, happy about being with the people I care about and just continuing my learning here, broadening my horizons, I’ll be successful,” she said.