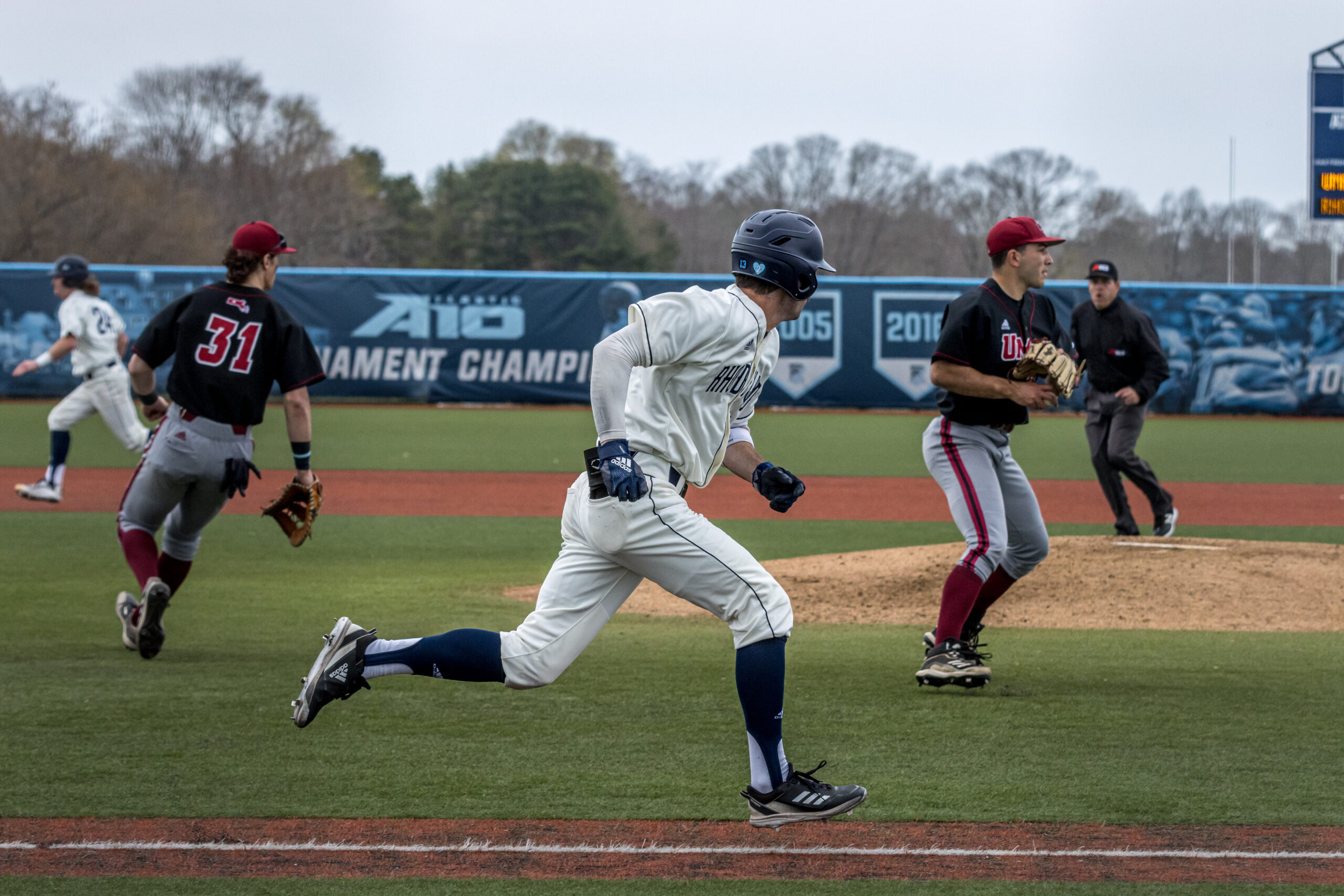 The Rams picked up their third-straight series in a trio of close games against UMass last weekend. PHOTO CREDIT: gorhody.com

The University of Rhode Island Baseball team picked up their third consecutive series win of the season this past weekend, winning two of three games against division rival UMass.

In the first game of the series last Friday, UMass opened things up in the top of the second inning when freshman first baseman Will MaClean ripped a fastball over the fence for a solo home run to take a 1-0 lead. The Minutemen added two more to the tally after the top of the third inning before Rhody got on the board.

Senior catcher Jordan Laske got the Rams on the board, scoring freshman center fielder Brody McKenzie to make it 3-1. No more runs were scored until the sixth inning, when UMass added another run off an error from the Rams infield.

Freshman designated hitter Rob Butler brought the Rams back into it when he singled up the middle and scored junior outfielder Calvin McCall and senior first baseman Joe Fortin to make it a 4-3 contest.

However, the Minutemen would add two more insurance runs in the seventh and ninth innings to make it 6-3 at the bottom of the ninth inning. Sophomore Addison Kopack made an attempt at a rally, scoring McKenzie on a double down the right field line, but great pitching from UMass’s Zach Clevenger finished off the Rams and gave UMass the 6-4 victory.

On Saturday, UMass once again opened the scoring when Drew DeMartino took Dominic Picone yard in the top of the first to give the Minutemen the 2-0 advantage. Rhody responded immediately when freshman left fielder Eric Genther dropped a line drive into center field and UMass center fielder Kevin Skagerlind missed on his dive to catch it. The ball rolled all the way back to the wall allowing Genther, Kopack, and second baseman Alex Ramirez to score on an inside-the-park home run to put the Rams up 3-2.

Rhody added to that lead when Laske delivered a two-run single to center field and Genther drove in another run to make it a 6-2 game. The Minutemen slowly chipped at the deficit thanks to a wild pitch and a balk from Rhody, making it 6-4. Genther homered once again and Fortin singled in a run to earn the 8-4 victory for Rhody and set up an Easter Sunday rubber match.

The third and final game of the series were just as closely contested as the first two games. Stellar pitching from Rhody starter Trystan Levesque got the Rams through the first four innings unscathed and Kopack took advantage, scoring on a Fortin sacrifice fly to give URI a 1-0 lead. Laske notched his eighth-straight game with a hit on a single and Kopack drove him in on a sacrifice fly to double the lead.

The stellar pitching continued when junior reliever Zach Fernandez entered the game in the seventh inning with the bases loaded and zero outs. He proceeded to retire his next six batters, striking out three and allowing Rhody to hold onto the lead. McCall drove in Fortin on an RBI double and that would end things, giving the Rams a 3-0 win and their third straight conference series.

Fernandez, who came through for Rhody in its most pivotal moment, said it was all about taking it one batter at a time.

“For all of us, it’s just about taking it one batter at a time,” Fernandez said. “I just wanted to get ahead on each batter and stay focused on each pitch.”

With the Rams now sitting second in the Atlantic 10 with a 6-3 record, Head Coach Raphael Cerrato said the team is feeling good, but needs to continue building confidence.

“These guys went through a tough start to the season but they stayed resilient,” Cerrato said. “We are playing well but we just need to keep improving every day.”

The team made it three in a row Wednesday with a 10-5 win against UMass Lowell. They’ll return to action this Friday when they begin a three-game series against Davidson. First pitch is set for 6 p.m.