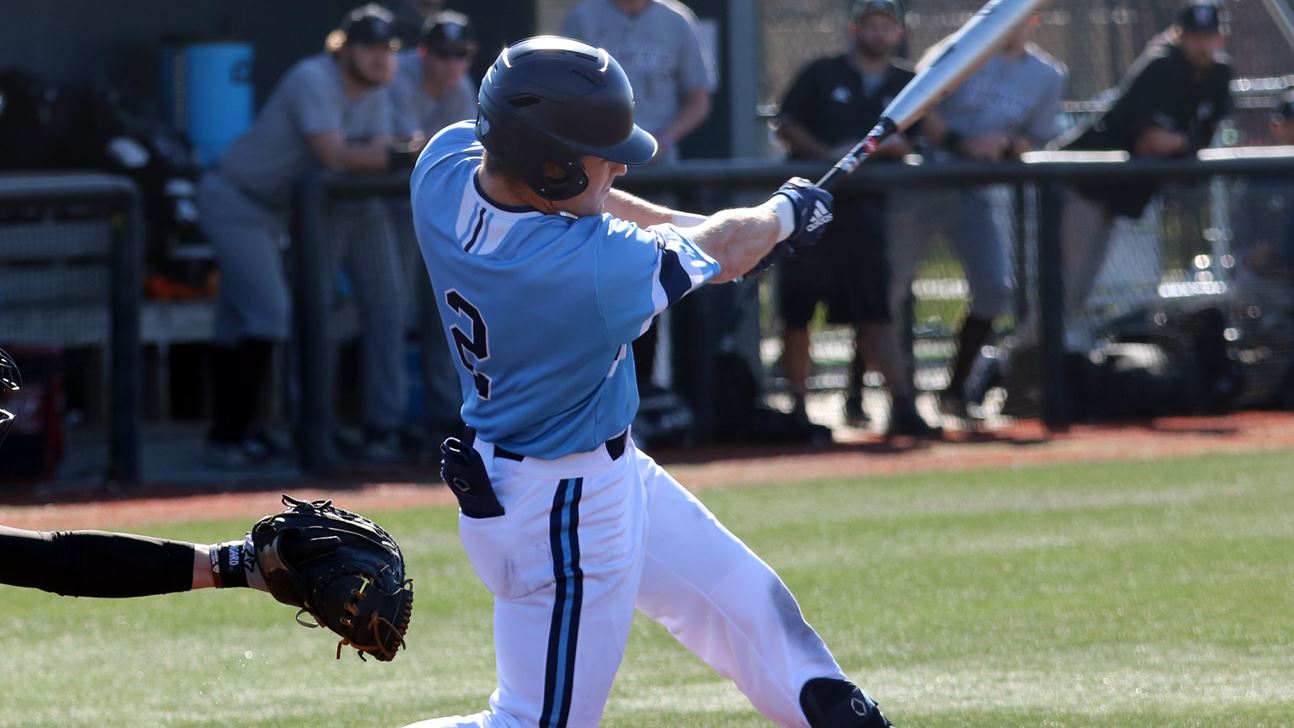 The team dropped their first conference series of the year this past weekend at Davidson. PHOTO CREDIT: gorhody.com

The University of Rhode Island Baseball team lost a three-game series to conference rival Davidson over the weekend and their lone game against Boston College Tuesday after it was shortened due to rain.

Things got off to a good start for the Rams in Game 1 against Davidson when Jordan Laske stole home and scored on a wild pitch in the first inning. Addison Kopack extended the lead on a fielder’s choice, putting the Rams ahead 2-0.

A throwing error by Davidson on a bunt from Alex Ramirez in the second inning brought Laske and Brody McKenzie home to extend the lead to 4-0.

The Wildcats struck back in their half of the inning when Jacob Hinderleider hit a two-run home run. They followed that up with an RBI single by Davidson’s Ryan Wilson to make it 4-3. Then, Davidson took the lead when Trevor Candelaria singled and Tyler Douglas scored to make it a 5-4 game.

Kopack tied the game up with a home run in the fifth inning, followed by another home run by Anthony DePino to give URI a 6-5 lead. The stellar inning for the Rams continued when Fortin scored the final run of the game on a wild pitch to help URI win 7-5.

Despite pitching for only 3.2 innings in the win, Bryan Kraus had a great outing, allowing one hit, no runs and striking out seven.

“It was a pretty good win on Friday,” Head Coach Raphael Cerrato said. “We got guys on base, pitching helped us out of some jams, Kraus played really well. It was a huge win for us.”

Game 2, however, was a complete disaster for the Rams. Kopack began it with his second home run of the series in the first inning to give URI a 2-0 lead. After that, momentum swung completely into the Wildcats’ favor as they scored in each of the first seven innings to make it 23-2. URI scored nine more runs in the ninth inning to close the gap, but the final result ended in a 23-12 loss for the Rams.

Kopack got the ball rolling for the Rams in the series finale when he hit his third home run of the series to give the Rams an early 1–0 lead. Hinderleider answered back for Davidson with a home run of his own in the second. A Kopack double in the third brought Ramirez home, followed by a two-run homer by Rob Butler in the fourth to make it 4-1.

Douglas’ single later in the fourth brought Hinderleider home to cut the lead to two, but Jack Cucinotta’s home run in the fifth extended URI’s lead to 5-2.

Carico’s home run in the fifth was the turning point of the game, as the Wildcats scored seven more runs en route to a 9-5 loss for the Rams.

Tuesday’s game against Boston College was shortened due to rain, but it gave the coaches an opportunity to see guys step up when called upon.

“Boston College, they’ve got a good team,” Cerrato said. “We had some starters go down with injuries against Davidson, so we needed some guys to step up when we played them, but overall it wasn’t a bad game.”

Boston College got off to a two-run lead, but URI got on the board when Eric Genther singled and brought McKenzie home.

Parker Landwehr’s two-run home run in the sixth extended the lead to 4-1 for the Eagles. Rhody got within one in the seventh inning, but rain and a Luke Gold home run halted their comeback.

“We were doing pretty good in the game up until the game was called due to the rain,” Butler said. “Pitching was good and consistent, and we came at them throwing hard. The bats started a little slow, but once they went to the bullpen, we began making contact and getting better.”

The team’s next opponent is an in conference matchup against George Washington University in another three-game series.

“George Washington is a good team, they’re one of the many in the Atlantic-10 conference that are tied, so the division is super tight right now,” Cerrato said. “The key is to just play to our abilities.”

The Rams will face the Colonials over the weekend, with the first game starting at 3 p.m on Friday.