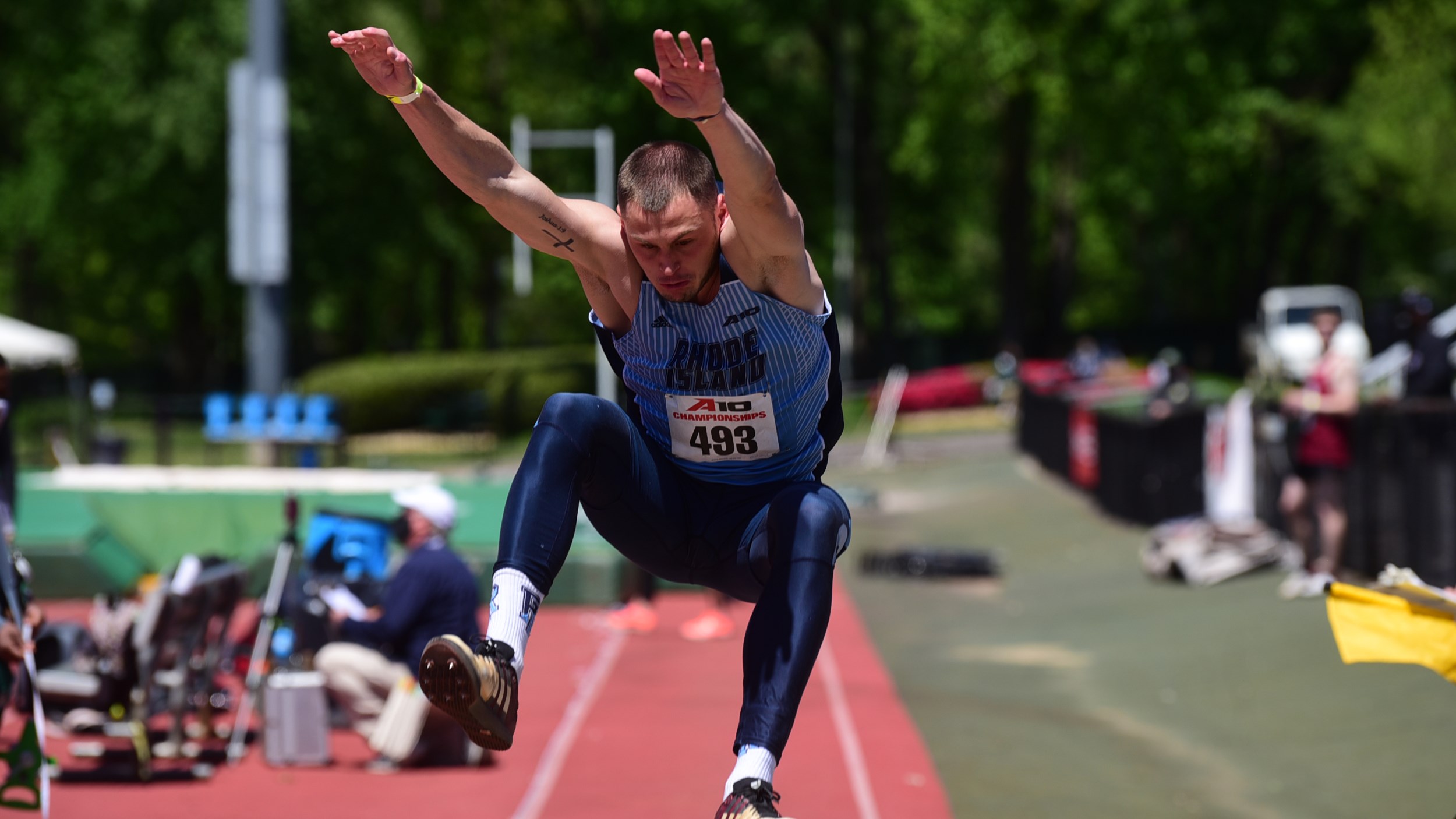 After winning A-10 weekly honors last week, Reichenbach followed it up with a win in the long jump, leaping 7.14 meters. PHOTO CREDIT: gorhody.com

On Tuesday, 11 first-place finishes highlighted a solid meet at the Holy Cross Invitational for the University of Rhode Island Men’s Track and Field team against Holy Cross and Assumption College.

Head coach Trent Baltzell was impressed with the team’s performance in what he referred to as a “tune-up” meet in the team’s preparation for the upcoming Atlantic 10 Championships.

“With only two or three teams competing [every year], it’s low key,” Baltzell said. “I think there’s a lot less stress occurring at this meet, so guys can just have a little fun and I think it shows in their performances.”

Jack Reichenbach and Jolon O’Connor both had two first-place finishes in Tuesday’s Invitational. Reichenbach won the long jump with a 7.14 meter leap and the high jump, clearing 1.95 meters. On the track, O’Connor won the 100 meters in 10.75 seconds and the 200 meters, finishing in 21.71 seconds.

Throughout his race, O’Connor had one simple goal in mind.

Six other Rams took home first-place honors in their events. Sam Bond won the hammer throw with a 58.40 meter mark and Derek Jacobs took first in the shot put with a 16.30 meter throw. Orion Joyner finished first in the triple jump at 13.06 meters, while Nikolaj Freschlin led the way in the javelin with a 59.47 meter throw. In both the shot put and javelin events, the top three finishers were all Rams.

On the track, the Rams continued their dominance. With his first-place finish, O’Connor was one of four Rams occupying the top four spots in the 100 meter. Ben Fleischer won the 1500 meters in 4:00.18, while Lucas Plaia took first in the 400 meter in 48.32 seconds.

The Rams also had one relay winner. Their 4×400 relay team consisting of Eli Baker, Nathan Coogan and Collin Ochs won their event in 3:29.19.

A common trend through this outdoor season was the weather. The team was met with unfavorable weather conditions. Rain, wind and colder temperatures were common throughout the competition. O’Connor personally wasn’t a fan of the conditions.

“It was terrible,” O’Connor said. “It was wet, cold, my muscles were cold, tight, I couldn’t really warm up.”

Despite the weather, Baltzell was happy that his team battled through the elements.

“We knew we were gonna go up there and get some rain and some colder temperatures than we would have liked, so it was really, really important that we just focused on ourselves [and] just did the best that we possibly could’ve given the conditions,” Baltzell said. “We competed at a very high level relative to what I thought we might have been. We were really, really happy.”

Next up, the Rams will travel to Providence for the Brown Open on May 1, which will provide one last opportunity for athletes who have not had a chance to run due to injury or illness to tune-up before the upcoming A-10 Championships in Virginia. After that, the A-10 Outdoor Track and Field Championships will take place in Richmond, Va. the weekend of May 7th.