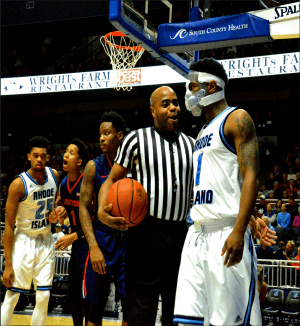 The University of Rhode Island men’s basketball team missed out on opportunities to earn the elusive marquee win, first losing in the final minute against Dayton in a heartbreaker at the Ryan Center, Friday night, and then were treated to a one-sided rout, when they visited Virginia Commonwealth on Tuesday.

The first game was a back-and-forth affair that featured 17 lead changes. The Rams (14-11) were not rattled by the big competition, staying with the No. 19 Dayton Flyers (21-3), as they once again teased an upset and the rare home court celebration. Four McGlynn continued to build on his lights-out shooting against George Mason, again finding his rhythm from three-point range, where he went 5-for-9, tallying a game-high 19 points.

Kuran Iverson made his first return since suffering a concussion on Jan. 30, but was limited to just 10 minutes of action.

“This was really his second live action in two weeks,” head coach Dan Hurley said. “It’s almost unfair to play him 10 minutes in a game of that level. He gave us a bit of a lift there. We obviously need Kuran. He’s one of more talented and athletic players.”

URI went into the half down four after what ultimately proved to be a costly last second tip-in by Dayton’s Sam miller which made the score 37-33 at the break. Both teams shot the ball well, but played different games, with the Rams finding their stride from downtown, shooting almost 48 percent, while Dayton attacked the paint more.

The Rams got off to a hot start in the second half after back-to-back McGlynn 3-pointers, but Dayton soon regained control with an 8-0 run, which was ultimately erased after URI awoke from a slumber that saw them go more than eight minutes without a basket. With the score deadlocked at 58 with three-and-a-half minutes left to play, a clutch Jared Terrell step back 3-point basket propelled the Rams to a 61-58 lead. Dyshawn Pierre then scored four unanswered points to reposition the Flyers on top, continuing a trend of lead changes in the game’s final moments.

“I thought those guys weren’t probably as sharp as they have been, especially in the first 28-30 minutes of the game, but then they turned it up in winning time and gave us a great chance to beat a great team,” Hurley said.

Hassan Martin, who tallied a double-double of 15 points and 10 boards, converted a go-ahead three point play with under a minute left. The Ryan Center was once again brimming with hope and optimism as the game was left to the defense, but like in previous big games, the Rams were subjected to an inopportune reversal of fortunes that culminated with a Pierre dish to Darrell Davis in the corner for a game-clinching 3-point basket. URI had one last chance, but McGlynn missed a contested mid-range jumper, which allowed the Flyers to escape with the road win.

“The effort these guys gave, it’s hard to walk away on a broken play, with a three to beat you there,” Hurley said. “It’s about getting over the hump. It’s making front ends of one-and-ones down the stretch, making the right reads in those end of game situations. A little bit of it too is the wrong guy caught in the corner.”

The Rams then went into VCU a couple days later looking to rebound, but found themselves chasing the whole game.

“They were really good,” Hurley said, according to the Providence Journal. “They’ve been at the top of the league along with Dayton most of the season and there’s a reason for it.”

The Rams trailed 11-4 in the early going and the deficit grew to as many as 22 points in the second half, with URI unable to keep pace, trailing 37-23 at the break. The shooting prowess that was present against Dayton disappeared, as the Rams shot an abysmal 34 percent from the floor, (27-62) and were 1-for-12 from three-point range on the night.

During the second half, the Rams were 16-30 for 53 percent from the floor, but they learned the hard way just how costly turnovers can be, as VCU turned URI’s 16 into 22 points.

“They’re quick and fast and we really made it easy for them by turning the ball over like we did,” Hurley said. “You can’t do that against a team this good. We had trouble running our stuff most of the night.”

Sophomore guards Jarvis Garrett and Jared Terrell, and senior Hassan Martin each scored in double figures, despite the team’s offensive struggles in the first half. Terrell led all scorers with 22 points and also grabbed four rebounds, while Martin finished with 19 points and seven rebounds.

With 3:50 remaining in regulation, the Rams went on a 21-8 run, bringing them within eight points, before eventually running out of steam. Â After the Rams got into foul trouble forcing Kuran Iverson and Martin in and out of the lineup, VCU ended the game on a 9-2 run, winning 83-67.

The Rams will return to Kingston to host Duquesne on Saturday, 7 p.m. at the Ryan Center.