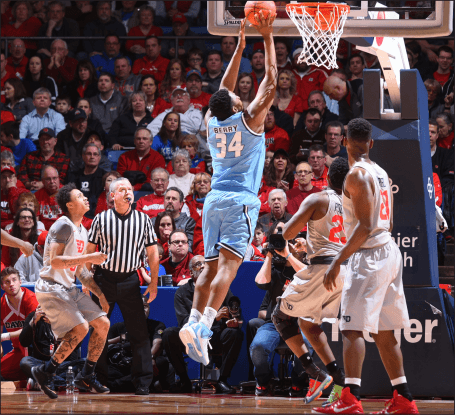 Colin Howarth-Tune in today to catch Rhode Island I play the University of Massachusetts Amherst at 6:30 p.m. Or don’t. It will be a pretty boring game. UMass is bad. This is a team that went on a seven-game losing streak and lost to Fordham twice in the same season. TWICE. If you lose to Fordham twice in a season, you shouldn’t be allowed to participate in the A-10 tournament, even if you have the best record in the conference. Sure, URI may have lost to them at the end of the season, but that’s because Ryan Rhoomes, a senior who averages about seven points a game over four years somehow got hot. Anyways, the point is UMass is bad. So URI moves onto VCU, who may have beat them earlier in the year, but I got a feeling about this one. URI will take it by a lot too. Then, URI will go on to beat St. Bonaventure, only to lose to Dayton in the finals and miss the NCAA Tournament.

Julian Stello-The favorite for many bracketologists to win the A-10 Championship would be the conference leading Dayton Flyers (24-6), however four of their six losses on the season come from conference opponents. One such opponent is URI, who defeated the Flyers 75-66 on Feb. 27, and only lost by two in their first meeting. Rhode Island is the sixth best team in the conference, but if they can defeat the highest caliber conference opponent nearly twice why wouldn’t this team be entering the conference championships with some confidence? Rhode Island opens up tournament play against a UMass team they just beat 68-50, and although they split their 18 conference games in the regular season, this is a team with heart, defensive intensity, an intense coaching staff and more than enough ability to make a run against the conference’s top seeds. It is unlikely, however, that they will be able to overcome VCU, who I think will be cutting down the nets at the Barclays Center.

Alex House-It was a tumultuous season for URI, with injuries and several lost opportunities in pivotal moments leading to a mediocre conference record and subsequently a potentially unfavorable draw. This was supposed to be the year, but now without the two best players, this program is forced to rely on a scrappy bunch that despite proving itself in a defining win against Dayton, is simply not yet capable of running the table on a neutral court. They reverted to their old ways following another late-game loss against Fordham. They should, however, be undeterred by a bottom-tier UMass team before facing what is the worst possible opponent for them in VCU. That being said, I don’t see the Rams, with their level of toughness and imposing defense to get handled the way they did in their last matchup. Inconsistent shooting will lead the way for VCU to edge out the victory, but URI could take some satisfaction in falling to whom I believe will be the eventual champs after they beat St. Joseph’s in the final.

David Albiani-Going into the Atlantic 10 tournament, Rhody should build some momentum with their game against UMass. The Minutemen have struggled all year and Rhode Island is simply the better team even without Hassan Martin. Winning that game then sets up a more challenging matchup against VCU, which will be difficult, but not impossible. VCU has had games where they do not play up to their potential and if Rhode Island can hit some 3-pointers and hold Â VCU in the 60s for points they should have a good chance to win and set up a date most likely with St. Bonaventure. The good news is Rhody would not have to play Dayton until the finals. Unfortunately for Rhode Island I think they come up short against VCU and build toward next year as I think Saint Joseph’s and St. Bonaventure meet in the championship with Saint Joe’s winning it all.