Photo courtesy of March for Our Lives

“The only thing that stands between me and my diploma is an AR-15,” said high school senior, Vivian Angell, who plans to write this on the sign she will carry during the upcoming March For Our Lives in Providence on Saturday, March 24.

Angell, a student at North Kingstown High School, will join thousands of other Rhode Island residents on March 24 at the March For Our Lives. The event is one of over 700 marches being organized around the country in response to the recent shooting in Parkland, Florida. According to the official March For Our Lives website, the victims of this tragedy organized the marches “in an effort to demand [that] their lives and safety become a priority and that we end this epidemic of mass shootings.”

“Society allows us to feel sad for a little while but they don’t feel the need to make any real changes because people usually forget about them soon,” said Angell. “That’s why I think this is so revolutionary. Generally when this amount of time passes after a shooting, people begin to move past it. With this though, people are still talking about it, are still angry about it, which is good because we are still making movements.”

Angell took part in the school walkouts that occurred nationally last week, joining the silent march that was organized by both her classmates and school administrators. During their event the school handed each student a sign that listed a place where a mass shooting occurred and how many people died there.

“I was looking at these papers and I didn’t recognize almost any of them,” she said. “What really makes me angry is the fact that we have so many shootings that I can’t even register all of them.”

Within our own community at The University of Rhode Island, students across all departments are just as fired up about this upcoming event.

URI student, Kayleigh Lapre, said she is “marching for a political system where guns aren’t given more rights and aren’t protected more than our kids are in school.”

Lapre thinks that this movement will have more of an influence than previous gun control efforts. She believes this because the movement is being coordinated by the shooting survivors themselves.  “Right now we are hearing from survivors of a mass shooting. They just lost their friends and their siblings and here they are getting politically involved. That just shows that that’s the answer. They went through such a travesty and now they are using their story to change our country politically.”

“I’m not the type of person who believes that the solution is banning all guns,” said Lapre. “But I also don’t think it should be easier to get a gun than to fill out FAFSA.”

Lapre hopes that this march will show the nation that people want to see changes with gun control laws, though she is aware that not every person marching on Saturday will have the same beliefs on what the best course of action is.

“I’m no expert on gun laws so I can’t say what’s best,” said Lapre. “But I know that many Americans believe that change needs to occur and this march will be a big signal of that.”

Lapre is a member of an organization called URI Democrats, a group filled with students equally passionate about this issue.

URI Democrats president, Andy Boardman, said that his goal for his organization is “to really give people a jumping point to be able to get involved and take action on things that they’re passionate about.”

Boardman explained the aggregations he has with society’s responses to mass shootings. “Things generally follow the same script. The tragedy will occur, people will die, Democrats will call for legislations, call for solutions. Republicans will send their thoughts and prayers, and then nothing real happens.”

Boardman believes that Parkland marked a turning point in this script when students began to get involved. “These survivors along with the people our age who have grown up with the reality of gun violence in schools, have organized to send a message to legislators and politicians that thoughts and prayers are not enough,” he said.

Boardman added that his organization, URI Democrats will be partnering with RI Coalition Against Gun Violence to provide a free bus ride up to the rally and back. He said they will leave the Memorial Union bus circle at 11:45 a.m. and leave Providence to return to campus at 3:30 p.m. Contact uricollegedems@gmail.com for more information.

“I think here in Rhode Island there is a real opportunity to pass some meaningful reforms,” said Boardman. “On the national level though I think we are going to have to keep this movement going until 2018 and 2020 and change who our leaders are in this country in order to make meaningful progress. Although, showing that there is massive public support for these reforms and for these communities is essential to making these changes.” 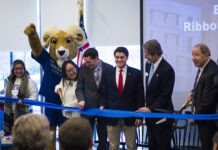