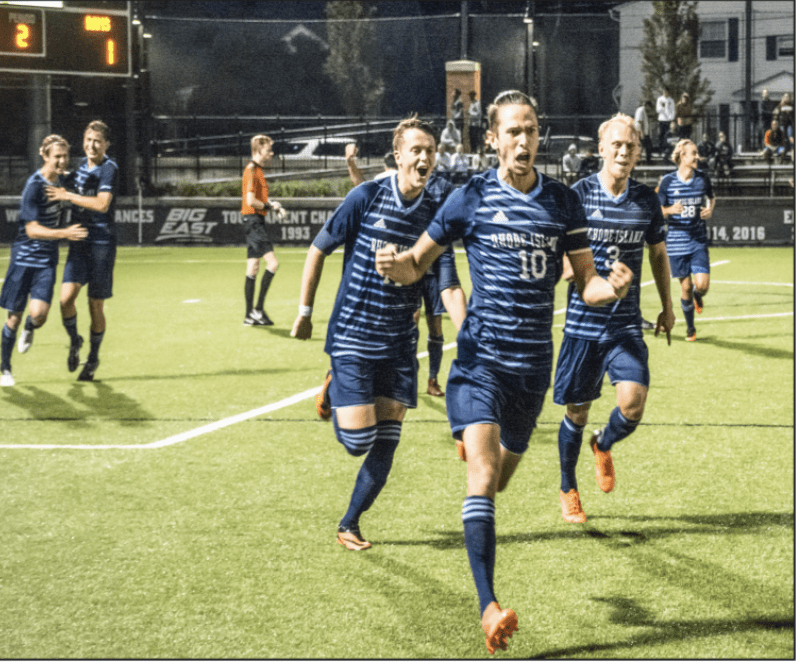 Autumn Walter | The Rams celebrate after scoring their second goal of the night.

On Tuesday night the University of Rhode Island’s men’s soccer team beat rival Providence College 3-0, remaining unbeaten on the year and moving to 6-0.

The No. 23 ranked Rams were able to continue their shutout streak on the season, as they still have not allowed a goal on the year. Starting the game for URI in goal was junior Stefan Schmidt. Schmidt went 65 minutes into the game, facing seven shots, had one save. Freshman Roger Penske subbed Schmidt out and played 25 minutes himself. Penske faced six shots, with one on goal and had one save.

The Rams opened up the game with a goal in the 24th minute by senior defenseman Liam Daley. Adding onto the Rhody lead and making it 2-0 was senior midfielder Dominik Richter in the 50th minute, his second of the season. Closing out the scoring for Rhode Island and making it a 3-0 lead was redshirt freshman midfielder Edvin Akselsen in the 67th minute. That goal was number three on the year for Akselsen.

On the season for Rhody, they have now outscored opponents 15-0 on the year, with nine of those goals coming in the second half. The team leader in goals is tied between Stavros Zarokostas and Edvin Akselsen. Opponents of the Rams have now attempted 61 shots on the season, none of them matriculating into a goal.

For Providence, they now move to 3-4-1 on the year. In goal, for the Friars was redshirt senior Colin Miller. Miller faced 9 shots, allowing three goals and had two saves, while playing 71 minutes. He was subbed out by redshirt sophomore Tony Billeri, who faced two shots, had two saves and played the final 19 minutes of the game.