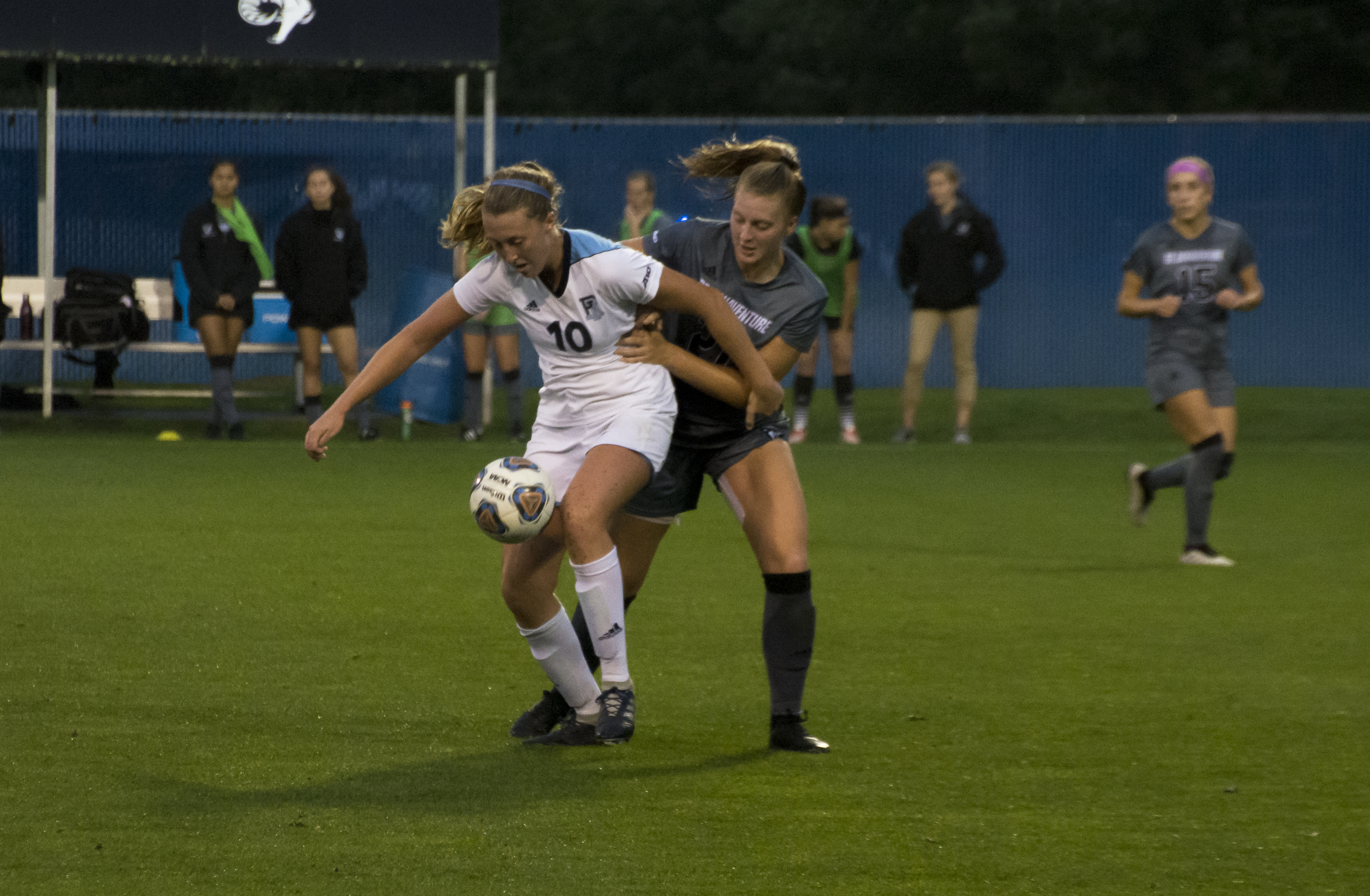 Photo by Autumn Walter | Brooke Osmanski tries to make a move for the Rams, fending off an attacker from St. Bonaventure.

Coach Megan Jessee, now in her second year, agreed that the St. Bonaventure game left much to be desired.

“St. Bonaventure was definitely a winnable game,” Jessee said. “I thought, unfortunately we just weren’t as clean as we needed to be throughout the game, and that ultimately cost us the game, which is unfortunate because I think we had our chances to finish.”

One of the brighter spots from the game was a historic first for one of the Rams. Amanda Schafer, a true freshman, tallied her first goal in the 87th minute of the contest. Her goal was too little to late however, with the Bonnies finishing the game in a 2-1 victory.

The Rams quickly switched their focus to senior night, with the Saint Joseph’s Hawks coming to town. The outgoing seniors had been through a noticeable shakeup during their time on campus, with coach Jessee taking over halfway through their careers. Jessee was appreciative of their efforts to making the transition as smooth as possible, as well as setting up the future of URI Women’s Soccer.

“It’s been a group that’s been pretty bought in in terms of making the change,” Jessee said. “They’ve definitely been a big help in laying the groundwork of the future of this program.”

Unfortunately, the Hawks quickly took hold of the game and never let go. The Rams nearly jumped out to a 1-0 lead, with the players on the field believing the ball crossed the goal-line. The Referee didn’t agree, and only minutes later the Hawks took the lead. The floodgates soon opened, with the Hawks taking down the Rams 5-0.

“[There is a] very good team in Saint Joe’s, they had a lot of seniors, so a very experienced team,” Jessee said. “They’re higher-up in the standings so playing with a lot more confidence. Although we started off very good, I think if we would’ve finished one of the chances we had early on in the game I think that would’ve changed the game quite a bit.”

One of the takeaways from that game was the defensive effort. Jessee said that the team needed “More focus from the defensive end. Being sharper, which is the basics. Tracking runners, being a little bit more ruthless in our box in terms of getting to balls and not letting other teams get to balls. Kind of taking care of our house a little more.”

With two games left in the season, and without a win yet, the Rams have one goal left in mind: spoil the party. VCU comes to town on Thursday, a team that is competing for a regular season Atlantic-10 title.

“We talked a lot about bringing the energy, having a little bit more fun with what we’re doing” Jessee said. “VCU’s in the hunt for the regular season title so, to be able to play the spoiler, we took them to double overtime last year at their place, it’s definitely a game that I think we can win.”

The Rams host their last game of the season Thursday night against VCU. They will then end the regular season at George Mason on Sunday.