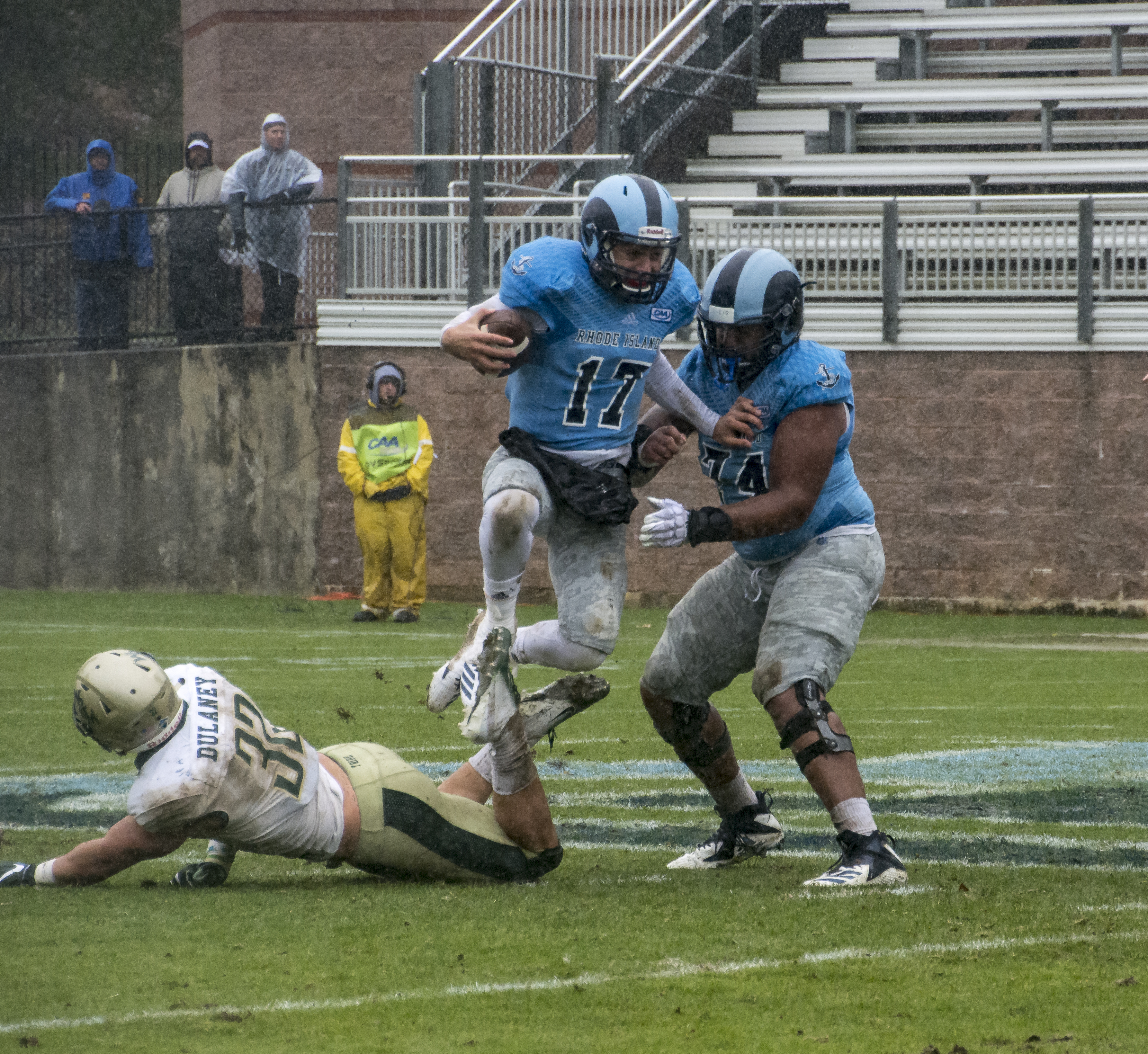 Photo by Autumn Walter | The Rams won against William and Mary, facing off during a nor’easter.

Jim Fleming had it all planned.

Even on a day where the forecast called for a nor’easter and history might suggest Rhode Island football was destined to lose their third straight game.

But, Rhode Island’s head coach Jim Fleming had it all planned out.

The Rams took down William & Mary 21-10 in Kingston, moving them to 5-3 overall on the season on Saturday afternoon.

The weather, the injury report, the opponent, even the coin toss. You name it, Fleming, his staff and players were ready for it this week.

In a way, Saturday’s win was a microcosm of what the football program at URI has become under Fleming.

Despite the wet, windy and miserable day and more empty Meade Stadium seats than fans, Rhode Island marched onto their field with their lunchbox mentality and got to work.

But, it’s deeper than that. It was the preparation.

“The credit when you start to look at the win becomes the way we planned to do it,” Fleming said.

It was the emergence of junior running back Naim Jones. Jones, by no stretch a household name, showed up for work and balled out. He ran for a career-high 37 rushes, 152 yards and a touchdown. Jones’ 37 carries is tied for fourth-most in a single game in program history.

“I knew it was coming,” Jones said about his workload. “During the week we worked on it a lot. I just played my role.”

Much like the career day Jones had for the offense, a defensive player also added a first to his football career. Freshman defensive lineman James Makszin intercepted his first ball of the season.

“That was the first interception I have had in my career, like [since I started] played football,” Makszin said. “It was a shocking feeling.”

It was the special teams, the third phase to the ball game. The phase of the game that over the past four seasons, where wins were few and far between, Fleming still took just as serious as he does now.

The Rams scored their first points of the game vs. William and Mary off of special teams. Momodou Mbye fell on a fumbled snap from the Tribe’s punt team in the end zone, helping URI tie the score early in the first quarter.

But, not only do the Rams take special teams serious, but there is a clear emphasis, even on days they score on special teams, they can be better.

“We prepared everything in terms of how we were going to manage special teams with the wind in our face and with the wind going with us,” Fleming said. “We went through very detailed instruction and still had our hard times. I think our guys believe in special teams. We put our best players there and it’s an honor to be on that. I thought they performed well, but we obviously can keep taking steps and can play better.”

The preparation has been the same. Through one-win seasons or FCS Top 25 weeks, Rhode Island makes a point to out-prepare their opponent.

The emphasis is the same. The same intangibles, specifics and details are all stressed.

With the win, for the first time since 2010, Rhode Island is guaranteed at least a .500 record over FCS competition. Rhode Island also has their most CAA wins with four in a season since 2011.

With three games remaining and a 5-3 record, it looks like the Rams could also secure their first winning season in nearly two decades.

Seemingly the opposite of how it usually goes, for Rhody the more things stay the same the more they change.

On Saturday, and since 2014, Fleming has stuck to his plan.