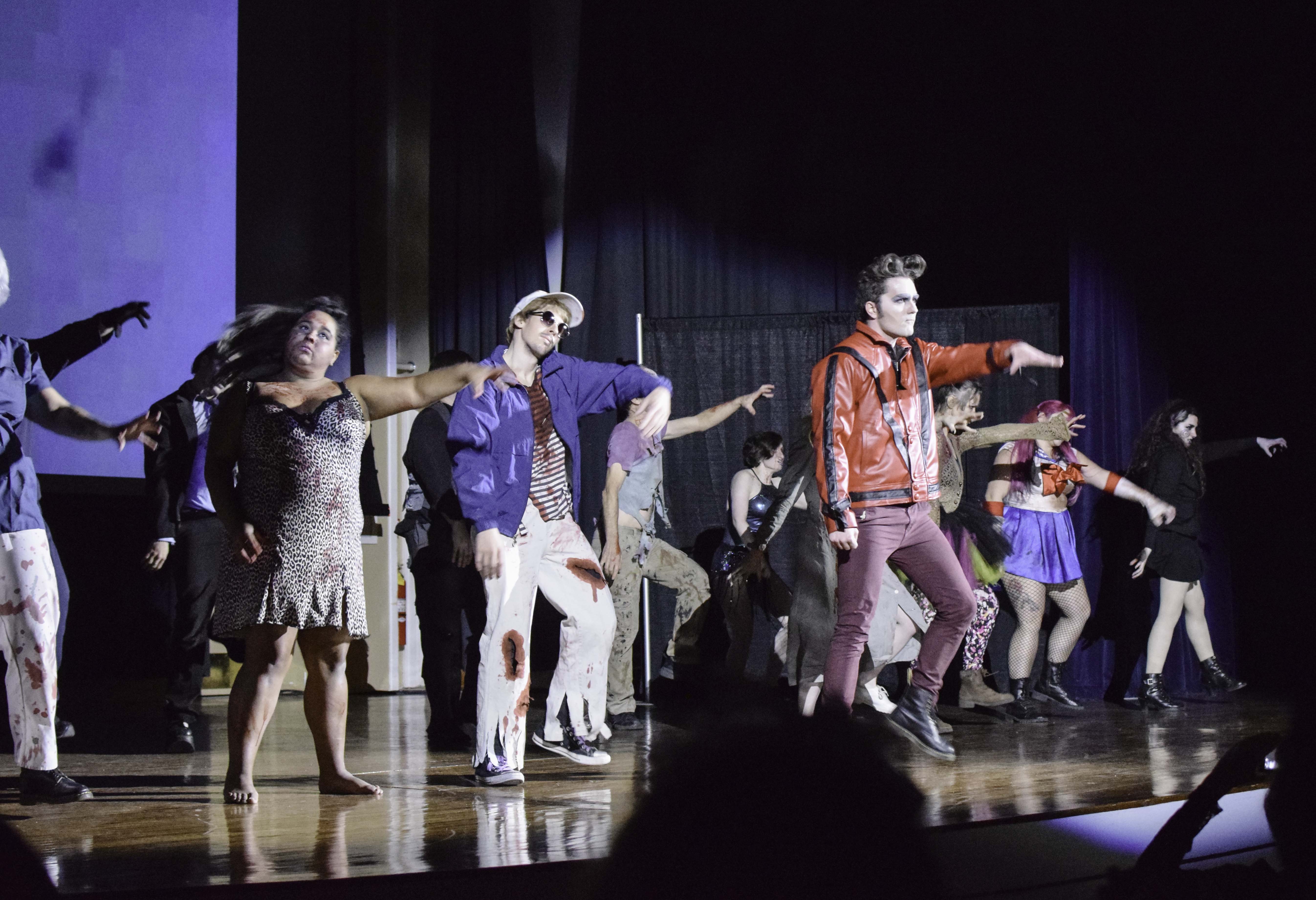 Photo by Joseph Lachance | The RKO Army performs to “Thriller” during pre-show.

The RKO Army Performance Troupe put on a live performance of “The Rocky Horror Picture Show” in Edwards Auditorium at the University of Rhode Island on Oct. 26.
RKO Army is a small shadow cast from Rhode Island that URI’s Gender and Sexuality Center brought back to campus this year.

The annual “The Rocky Horror Picture Show” performance was the final event the Gender and Sexuality Center held for Coming Out Month. Doors opened at 10:30 p.m. and the show began at 11 p.m. Before the show began, the audience was able to purchase “shit bags” filled with props related to the film. In honor of this year’s theme “Thriller Tour” RKO Army performed a parody of Michael Jackson’s Thriller during the pre-show.

In the past, anyone who had never been to a live performance of “The Rocky Horror Picture Show” was deemed a “virgin” and was marked with a “V” drawn on their forehead. This year students were simply asked to stand up if this was their first time seeing the movie acted out live. If students were “virgins,” cast members came around the auditorium, bringing about 30 chosen students to the stage to perform a ritual to make them no longer virgins.

The film began after the student’s whose virginity was revoked returned to their seats. The original movie of “The Rocky Horror Picture Show” was projected behind the live performers, who acted out the same events in sync with the movie characters.

The audience was encouraged to be very interactive with the cast throughout the performance by using their goodie bags to act out different scenes with the performers, dancing along with the characters in the movie and live performers and shouting out slanderous statements when specific characters would be speaking on the film.

The most common insults to be yelled were when the newly engaged two main characters, Brad (Barry Bostwick) and Janet (Susan Sarandon), were on screen. Audience members would shout “slut” at Janet and “asshole” towards Brad. Although these degrading slurs were encouraged to shout, these were the most innocent of what was yelled throughout the movie.

“I had no idea what I was getting myself into,” sophomore Christie Swanson said. “It’s definitely something you have to experience for yourself in order to get the full effect and fully understand what happens during the film and live performance.”

Director of the Gender and Sexuality Center, Annie Russell, thanked RKO Army for volunteering their time to come to URI and hold this performance for students to experience and enjoy. With some of the members being part of RKO Army for 40 years, all of the performers are volunteers, who generously spend their time on weekend nights to perform “The Rocky Horror Picture Show” for students.

“It was a really fun and interesting event to be a part of,” sophomore Lexi DelPico said.

Produced in 1975 and known to be a “cult film,” “The Rocky Horror Picture Show” is about Brad and Janet, a couple who discover a castle to take shelter in after their car gets a flat tire during a rainstorm.

The castle belongs to a scientist, Dr. Frank-N-Furter (Tim Curry), and a host of other very interesting characters who appear to worship and cater to Dr. Frank-N-Furter’s every need. Not understanding what they have gotten themselves into, the innocent and slightly prude couple find themselves in the midst of an unveiling of Dr. Frank-N-Furter’s newest experiment, the creation of Rocky Horror- a man who is supposed to represent the perfect male sex-symbol. While trapped in the castle, the characters begin to uncover their transgressive sexualities and fantasies.