Welcome back for the final installment of the weekly Colonial Athletic Association Football Pick-Em. Last week I hit on four of my six picks, which brought my win/loss total on the year to .500, at 17-17. Let’s take a look at this week’s matchups.

In the first matchup of the week the Rhode Island Rams host the New Hampshire Wildcats for their Senior Day game. The Rams are coming off a loss to James Madison, losing 48-31 on the road. This loss officially knocked the Rams out of the FCS playoff hunt, but this season can still be called a success for the Rams, as they have a chance this week against New Hampshire to be over .500 as Rhody is currently 5-5 on the year and 3-4 in conference. The Rams are boasting an elite offense this year, sitting at third in the conference in scoring offense, putting up just under 31 points per game. The issue for URI has been the up and down play of their defense, as the defense now sits at 10th in the conference in opponents points per game, allowing 28.9. For UNH, the Wildcats are finishing their season incredibly strong. After starting the year 1-6, and 0-4 in conference play, the Wildcats have surged in the second half and have won their last three games. Offensive play is the key for New Hampshire, as they have scored at least 24 points in all four of their victories, and also going over 30 in two of those games.

In the next matchup of the week, the Villanova Wildcats travel to Delaware to take on the Blue Hens. Villanova is 1-6 in conference and 4-6 on the year. The Wildcats are coming off of a 24-17 home loss against the William and Mary Tribe. Villanova’s defense currently ranks third in total defense in the conference, allowing 309.5 yards per game, and they’ll need a good outing if they hope to upset the Delaware Blue Hens. Delaware on the season is 5-2 in conference, and 7-3 on the season. The Blue Hens are coming off a loss against Stony Brook in which they only put up three points. Delaware also was only able to muster 197 total yards of offense. Delaware is fifth in the conference in scoring per game putting up 26.6 points per game so look for them to come back to the mean this week.

In the third matchup of the week, the Elon Phoenix travel to the northeast to take on the Maine Black Bears in Orono. Elon is coming off an incredibly disappointing effort against the Towson Tigers this week, losing 41-10. On the year the Phoenix sit at 6-3 and 4-2. Elon is on the cusp of an FCS playoff berth but needs a win against Maine to secure a spot in the bracket. The strength of this team so far has been their offense, as they score 26.1 points per game, and put up 379.6 total yards of offense a week. For Maine, the Black Bears have an opportunity to clinch an outright CAA championship with a win against Elon. Maine will still get at least a share of the title with a loss to Elon. Maine is 7-3 on the year and 6-1 in conference. Last week the Black Bears were able to handily beat the Richmond Spiders, 28-9. Maine’s strength on the year has been defense, as their defense is fourth in scoring defense in the CAA only allowing 20.6 points per game.

In the next matchup of the week, the James Madison Dukes travel to Maryland to take on the Towson Tigers. James Madison is fresh off a 48-31 win over Rhode Island, which moved them to 7-3 on the year and 5-2 in conference play. The Dukes have the second-best scoring offense in the CAA, at 36.3 points per game. JMU also has the number one scoring defense in the conference, as they have only allowed opponents to score 14.4 points per game against them. The Dukes are also second in the CAA in total offense, putting up 400.6 yards per game, trailing only Towson’s mark of 470.8 yards per game. This game is definitely shaping up to be an offensive shootout, as Towson also has the edge over JMU in scoring offense. They are currently number one in the conference, scoring 38.7 points per game. Towson is currently 7-3 on the year, and 5-2 in conference. Last week they imposed themselves upon the Elon Phoenix, winning 41-10.

In the next matchup of the week, the Richmond Spiders take on the William and Mary Tribe in Williamsburg, Virginia. Richmond is currently operating from the metaphorical cellar of the CAA, sitting at 3-7 on the year and 1-6 in conference play. The Spiders are currently on a three-game losing streak and are getting outscored over that span 111-58. Richmond’s defense sits dead last in the CAA in opponents points per game, allowing opponents to put up an average of 35.3 points per game. For William and Mary, they currently sit at 4-5 on the year, and 3-3 in conference play. The Tribe are coming off a win this past week, beating the Villanova Wildcats 24-17 in Philadelphia. The Tribe sits at dead last in the CAA in scoring offense, only averaging 14.4 points per game. FInishing the season with a paltry Richmond defense might be exactly what this offense and team need to build momentum for next year.

In the final matchup of the week, the Stony Brook Seawolves travel to New York’s capital region to take on the Albany Great Danes. This matchup is a battle of top versus bottom, as Stony Brook is currently 7-3 on the year and 5-2 in conference. On the other side, Albany is 2-8 on the season and is winless in conference with a record of 0-7. Stony Brook is coming off a big 17-3 win over Delaware and will look to continue to build momentum towards the FCS playoffs. The Seawolves have the fourth-best scoring offense in the CAA this season, averaging a total of 28.5 points per game. Their defense has also been elite on the year, as it is the second-ranked scoring defense in the CAA behind only JMU, only allowing 19.1 points per game. For Albany, they are currently on a six-game losing streak, and most recently a loss to UNH, 24-10. On the year Albany has the third worst scoring offense in the conference, only scoring an average of 20.7 points per game. Their defense has been just as bad if not worse, as they sit in second to last in the CAA in scoring defense, allowing 31.4 points per game to opponents. Look for Stony Brook to gain some momentum going into the postseason this week. 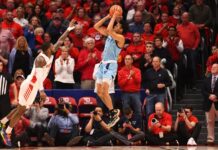 Boston University too much for Tennis