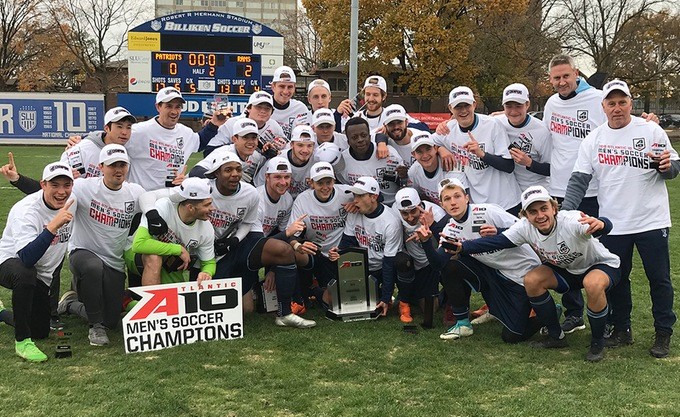 Photo Courtesy of GoRhody. Men’s Soccer won the Atlantic 10 Championship for the first time in 12 years.

For the first time since 2006, the University of Rhode Island Men’s Soccer team is heading to the NCAA Tournament. They cruised to three consecutive shutout victories, culminating in a 2-0 win over George Mason in the Atlantic 10 Championship Sunday afternoon.

The Rams had positive plays on all sides of the ball. Freshman standout Roger Penske made 19 saves over the course of the tournament. All five goals were scored by different players, including one from team captain Tyler Dickson.

Dickson spoke about what the team’s mentality going into the A-10 tournament.

“We all knew what was at stake,” said Dickson. “Going in we knew it was our year to win it, so everyone’s emotions kind of just got in check and everyone was just fired it, It was good to see everyone playing as hard as they did.”

One of the hallmarks of this team has been the way everyone has come together. This year featured a particularly diverse roster, with nearly half of all players coming from outside of the United States. For Dominik Richter, the player who scored the game-winning goal in the A-10 tournament, that diversity is what made this team so special. “We have like 10 or 11 guys from out of the country and we don’t have family here so we have to be own little community and family,” Richter said.

Head Coach Gareth Elliott echoed Richter’s sentiment. “It’s great having people coming from all around the country, all around the world,” said Elliott. “To come together as a family it’s been a tremendous thing. I think it really gives them an edge in competing for sure.”

For Elliott, this win cements his legacy as one of the most impactful coaches in the history of URI Men’s Soccer. This is URI’s seventh A-10 championship, of which he has had a role in six of them. Two of those championships came as a player, three as an assistant coach and now one as a head coach.

“It’s really a great pride, being an alum of the program,” said Elliot. “Having been in the NCAA tournament for URI as a player and as an assistant coach, so now to lead URI in an NCAA tournament as a head coach it definitely feels great and hopefully we can have positive outcomes.”

Those positive outcomes will have to start in East Hartford Connecticut, where the Rams will square off against their New England rivals, the University of Connecticut Huskies. The Rams were supposed to play the Huskies earlier this year, but the game was canceled.

For many of the Rams players, it seems like poetic justice that they get to face off in the postseason. “We were supposed to play them earlier this year, but they didn’t want to play us or something I guess,” said Dominik Richter. “Now they can’t cancel that game.”

Fellow teammate Stavros Zarokostas also admitted he was eager to face the Huskies. “It seems to be like a little bit of a rivalry. Very excited to be heading up to UConn.”

For the Rams, this season was an enormous success. For the first time since 2006, the Rams are going to add a trophy to their case. However, for Chae Brangman, the Atlantic 10 Champions Trophy just isn’t enough.

“I’m just looking forward for another trophy really,” said Brangman. “It doesn’t really matter who we are going to play, it’s gonna be some sort of grudge, some sort of energy level. Really right now it’s ‘may the best team win’ and we’re gonna be the best team.”

The Rams will duke it out with the UConn Huskies on Thursday, Nov. 15 at Rentschler Field. Kickoff is slated for 1 p.m. in the first round of the NCAA Tournament.