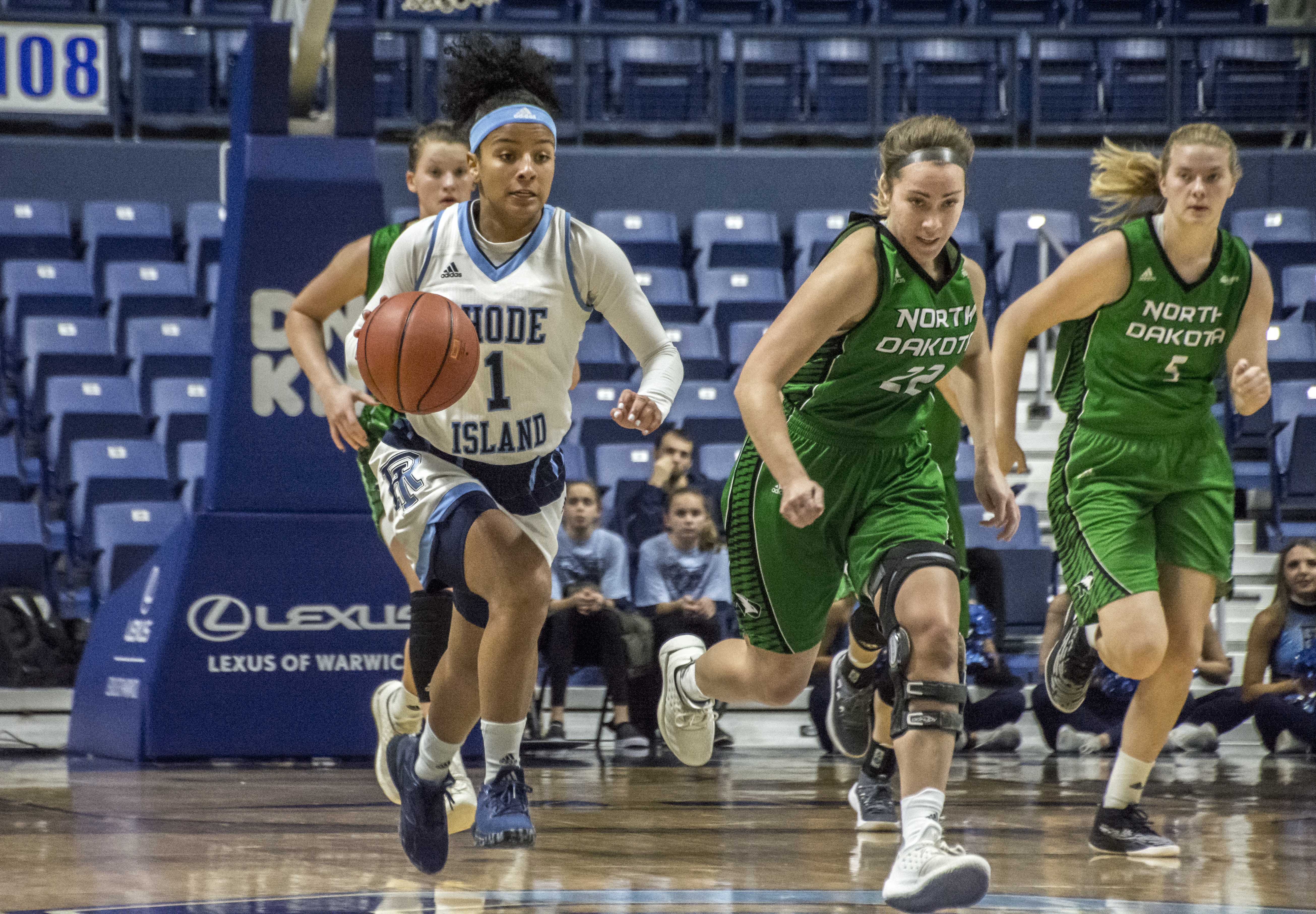 “We finally figured out how to win a beautiful basketball game, and I hope we remember how good that feels.”

This is the sentiment being echoed by Rhode Island Women’s basketball coach Daynia La-Force following the Rams 77-63 victory over the North Dakota Fighting Hawks on Tuesday night. This is the Rams third victory in their first five games of the 2018-2019 campaign, and also the best start for Rhody Women’s basketball under Coach La-Force, which includes her first year, where URI went 17-13 and started the year 2-3 in the first five games.

This was the best offensive game for the Rams on the young season, as they set the season high in points score, with 77. This was also the best shooting performance for Rhody on the season, as a team, they shot 43.1 percent from the floor, and also were able to hit 23 of their 25 free throw attempts, for a percentage of 92 from the charity stripe. “That’s just amazing,” said Coach La-Force. “To believe and buy into a game plan was just beautiful.”

Defensively the Rams were able to lock in as well. The Rams had 11 steals, four blocks and officially North Dakota turned the ball over 21 times in the contest. Redshirt junior guard Davida Dale’s presence was felt on the defensive side, as she was the Rams leading steal getter, with six of her own. Junior center Nicole Jorgensen led the Rams in blocks with two of her own. “We kinda changed our defensive scheme overall,” said La-Force. “We went more zone this game, more 3-2. It kinda forced them to shoot from the perimeter. It helped our inside defenders be a little better.”

Dale also tallied a career high in points, scoring 22 points. Dale had a monster game across the board as she also tallied seven rebounds and five assists. “I gained my confidence back,” said Dale. “It wasn’t here for a while but I got it back and it feels good.”

Redshirt junior guard Elemy Colome also had a great performance for Rhode Island, as she scored 20 points, on 5-10 shooting, and also going 8-9 from the free throw line. Combined the starting backcourt of Dale and Colome was the driving force of the Rams offense, scoring 42 points between the two of them. “It felt good being with her again,” said Colome. “I know at one point during the game I looked at her and said ‘This is the backcourt we’ve been waiting for.’ Me and her played together in high school for a couple years on the same travel team, so we know what it’s like to play with each other and it just felt good to be back on that groove again.”

The Rams now look forward to this weekend, where they play host to Providence College, Brown and Bryant in the Ocean State Tip-Off Tournament. Rhody will play Providence at noon on Saturday, Dec. 1.