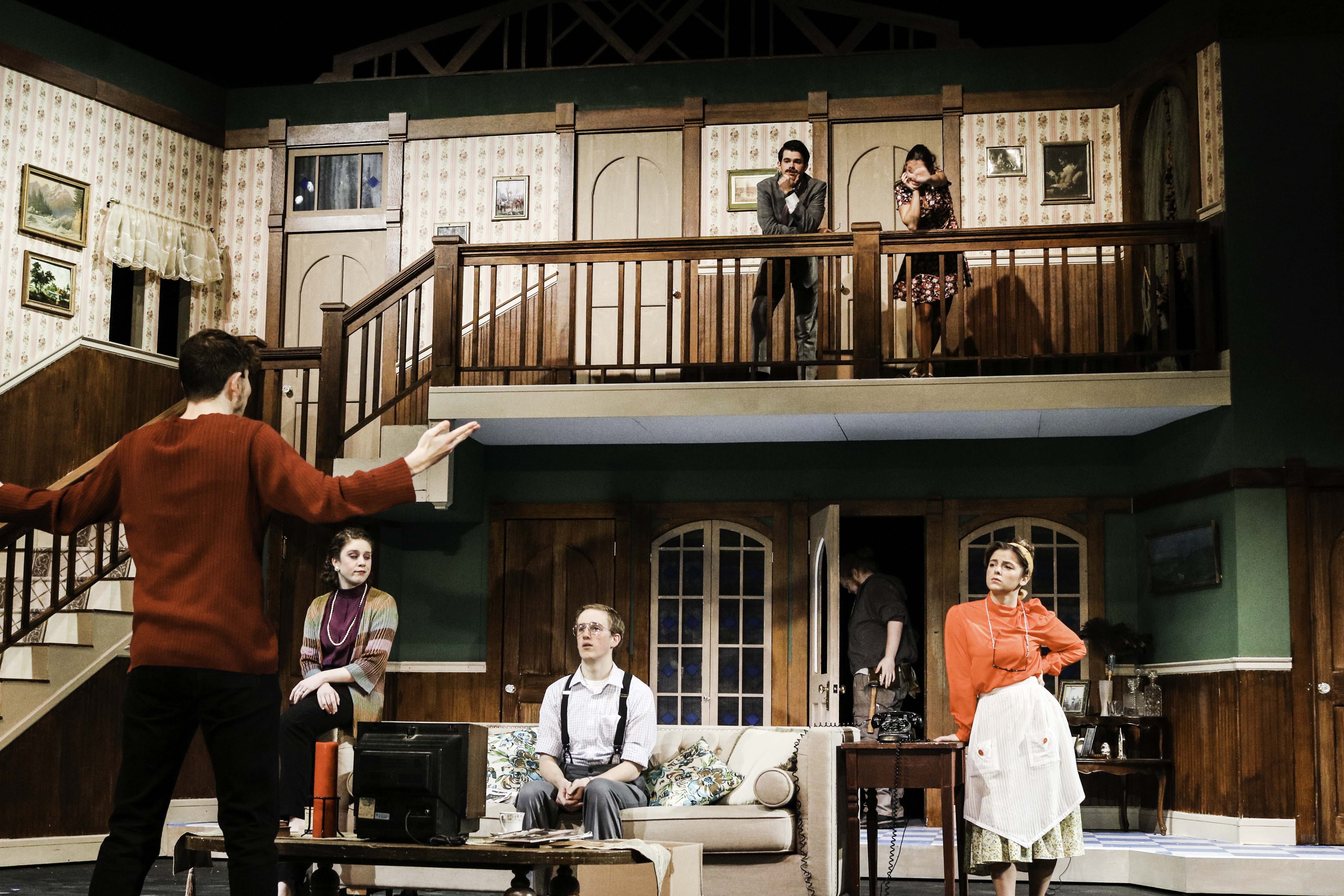 Take seven quirky characters, doors that never open or close when they’re supposed to, several plates of sardines, every possible problem that could go wrong backstage and you’ve got a performance of the comedic play “Noises Off.”

“Noises Off” is a three-act play about a play called “Nothing On.” The first act of “Noises Off” is of the ever-so-chaotic technical rehearsal the night before “Nothing On” is supposed to open. The second act transitions to backstage of a matinee performance of “Nothing On,” where personal drama about relationships and shenanigans occupy the cast during the live performance. The final act shows how the cast’s deteriorating relationships influence their performance, while they miss their cues, misplace props and more or less improvise “Nothing On” to cover up all the mayhem.

The University of Rhode Island’s theater department had their opening night’s performance of their two week run of “Noises Off” on Thursday, Nov. 29. The show itself is very comedic but to convey the humor effectively, you need to have talented actors, which URI’s students proved to be. Each actor excelled when it came to comedic timing and their facial expressions in their own way, which appropriately fit their character’s quirks.

While Omar Laguerre-Lewis, who played Selsdon, moved his body slower and matched the tonality of his voice with his character’s older age, Ardemis Kassabian, who played Brooke, went an entirely different route, as she was always performing an aimless task in the background. While Selsdon is an elderly, half-deaf experienced actor who has a drinking problem, Brooke is a ditzy young inexperienced actress who has relations with Lloyd, the director of “Nothing On.” Both of the actor’s decisions regarding their body movements and facial expressions fit their characters well and added to the show’s humor.

The set of “Nothing On” consisted of an older two-story home that was recently modernized to match the time period of the show. There are always people coming and going in the house. For a while no one knows that anyone is home, except for Mrs. Crackett played by Katharine Templeton, who is also known as Dotty in “Noises Off.” The actors all have to time their entrances and exists precisely, since one actor’s entrance cues another actor’s exit.

Even in the midst of the chaos, the actors managed to stay organized enough to miss their cues when the scripts advised them to do so, giving off the image that their performance of “Noises On” was going wrong, while it’s truly going well for “Noises Off.”

One of the challenges that comes with performing “Noises Off,” is that many of the actors are playing two characters. Having to be aware of which character they need to be at which time while performing the correct staging seems to be challenging, but the cast managed to do so without any notable mistakes.

The “Nothing On” rehearsals and performances are often interrupted by the set’s doors not always opening and closing when needed, which either results in their director, Lloyd, played by Erik Schlict, yelling or a change of plans during a live performance. The purposeful difficulties of the set often had the audience consumed by laughter, in addition to the misplacement of the sardines that poor Mrs. Clackett had been trying to sit down and enjoy throughout the entire plate.

It’s difficult to say what the funniest part of the performance was, considering that just when you thought it couldn’t get any crazier, the actors managed to surprise you, as they continuously add to the pre-existing chaos.

“Noises Off” is the kind of show that even people who don’t frequently go to the theater would enjoy. You won’t be fully immersed in the humor behind the sardines, broken doors and interpersonal relationships until you see it yourself.

The final dates of “Noises Off” are Dec. 6 to Dec. 9. Tickets can be purchased online at URI’s theater department website or at the door.