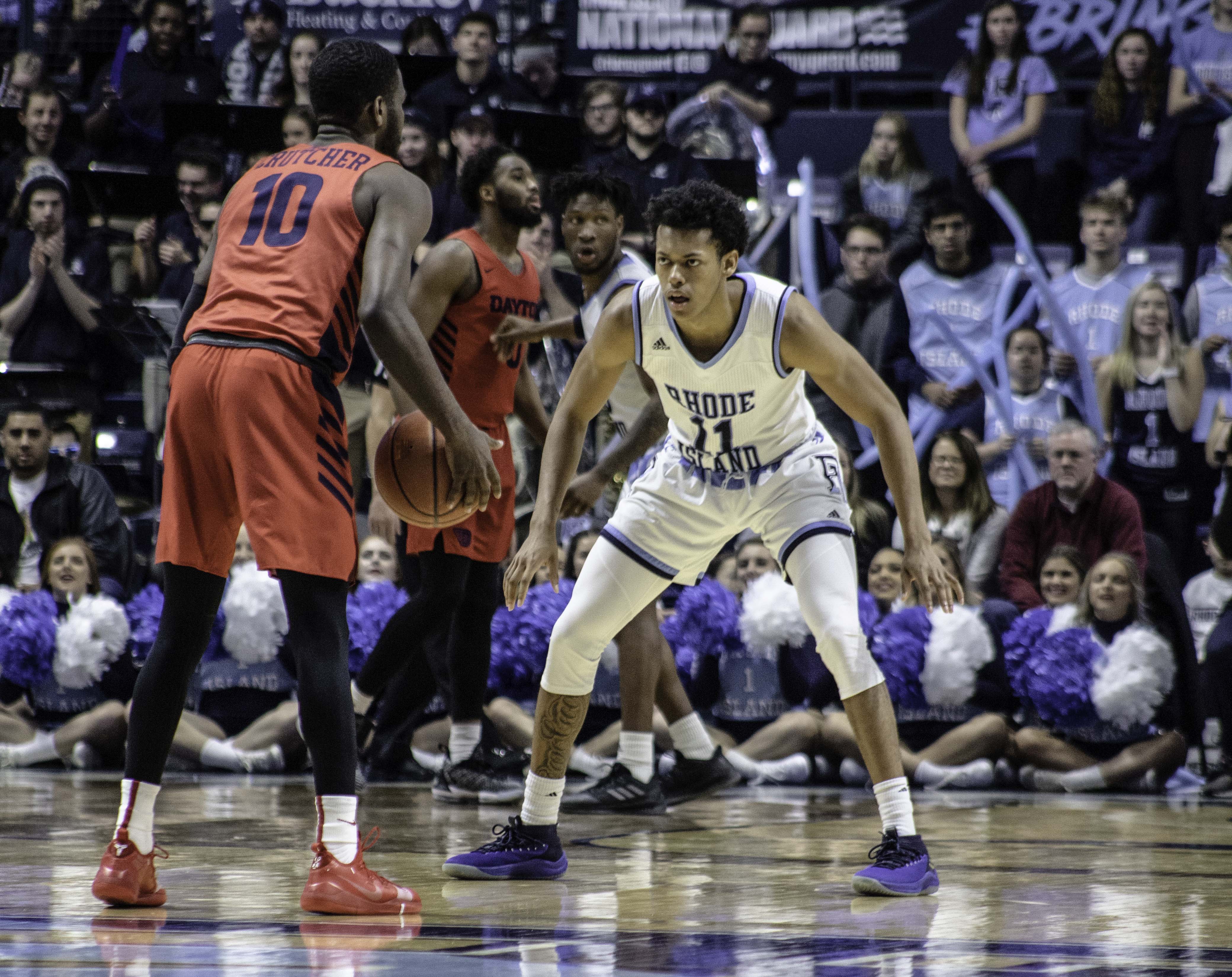 Junior Guard Jeff Dowtin looks in on defense as the Rams lost to Dayton this past Saturday. Photo by Momolu Akoiwala

A benchmark of Rhode Island men’s basketball has been and unrelenting defensive play. It’s simply the culture. However, with the Rams now losing four of their last five, and currently licking their wounds off a 29-point drubbing against Dayton, now is as good a time as any to examine what exactly is going on with Rhode Island basketball, with an emphasis on the defensive side of the ball.

It’s no secret that URI is at best a weak offensive team. Their offense is incredibly one dimensional because of the absence of a consistent threat from beyond the three-point line. This has allowed teams to pack the lane against the Rams and force them to take threes, something they are currently ranked 351 in the entire country. There are 351 division one basketball programs in the country. Even with the horrendous shooting the Rams have been able to rely on their defensive intensity to win them basketball games. It’s not always pretty, but defense absolutely still gets the job. However, URI now finds themselves at a crossroads for this season. How will a young team respond to their worst game of the season in front of the best home crowd they’ve seen all year?

Prior to the forgettable last five games, Rhode Island’s defense had only allowed 70 points or more four times on the season. The Rams have allowed the opposing team in the last five games to eclipse that number three times. Over this past stretch of Atlantic 10 games, (besides a masterful defensive performance against Saint Louis) we have seen a team that looks disjointed, disengaged and downright lost. I’m a believer in this team in the sense that they could absolutely make some noise in the Atlantic 10 tournament and can beat any team in the conference on any given night. The struggles of this team is not because of a lack of talent, as this roster exudes talent. The struggles of this team are based upon a lack of confidence, and its players thinking too much while playing. Against Dayton, Fatts Russell, who is primarily a scorer and has never seen a shot he doesn’t like, attempted only four shots from the field. That‘s the least amount of shots he’s attempted in a game all season, and the second fewest he’s attempted in his entire career (Russell attempted three shots in three different games his freshman year). Russell did do a good job as a facilitator, finishing with zero turnovers and four assists, but needed to look for his own shot more.

Even when there are times that the ball isn’t going in for this team, the mandate from Cox and the rest of the coaching staff has to be to remain stout defensively. That is the identity this team has to have to be successful. With their lack of offensive prowess, and even efficiency, Rhode Island has to make sure they can drag out games, keep possessions low, and be locked in on every single defensive possession. A full week off could not have come at a better time for this team.