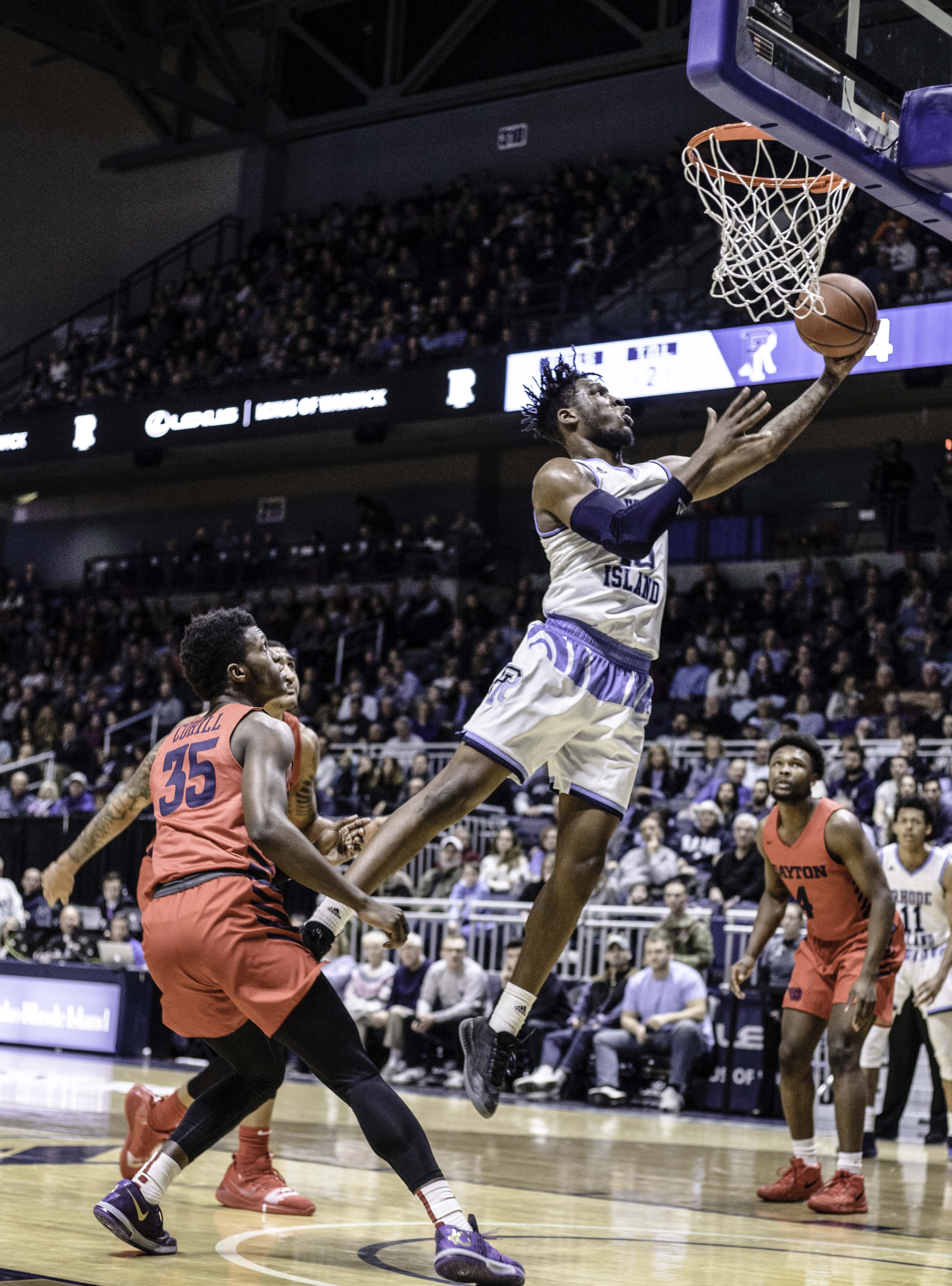 Junior Forward Cyril Langevine goes up strong for layup in loss against Dayton on Saturday. Photo by Momolu Akoiwala.

“That was an embarrassing loss on our home floor.”

In a game that was billed to be a heavyweight battle between two Atlantic 10 foes, this was the sentiment Rhode Island Head Coach David Cox had in his postgame press conference. Simply put, the Dayton Flyers marched into Kingston and made the Rams look like they didn’t belong on the same court.

A 77-48 loss stung for a Rhode Island team that was looking to maintain its terrific home-court advantage at The Ryan Center. Rhody has now lost two in a row for the second time this season, and has also lost four of their last five games. The loss against Dayton also moved the University of Rhode Island below 500 in Atlantic 10 play, with a record of 5-6. The Flyers raced out to a 25-6 lead just under nine minutes into the game.

Over this run the Rams missed their first eight shots of the contest, and shot an abysmal 29.6 percent from the field, including 15.8 percent from beyond the arc. In contrast, Dayton was red hot over the entirety of this one. The Flyers shot 63.3 percent from the field, and 50 percent from deep. Dayton’s starting lineup also boasted four scorers in double digits this game, with Jalen Crutcher leading the way with 20 points, and Obi Toppin keeping pace with 19 of his own.

All five of Dayton’s starters shot at least 50 percent from the field. The Flyers gashed the Rhody defense all afternoon with superior ball movement, as a team they finished with 17 assists on their 31 made baskets.

“We’ve been pretty good all year in terms of the ball movement,” said Dayton Head Coach Anthony Grant. “We’ve averaged 16-17 assists all year and I think that’s the mark of our team. When we’re at our best.”

For URI, the only positive from this game was the play of Cyril Langevine. Langevine finished with 23 points and 10 rebounds and was the only Rhode Island player to shoot above fifty percent in the game. Jeff Dowtin recorded a triple nickel for the Rams, scoring seven points, grabbing six boards and dishing six assists. The strangest part of this one on the Rhode Island side was not the poor shooting performance or lack of effort defensively, but was Fatts Russell being a non factor offensively. Russell seemed to be disengaged and unenergetic in this contest and it showed. He only attempted four shots, making none of them and going scoreless in the game.

“I was embarrassed for myself and for those guys for just the lack of pride they showed,” said Cox. “When the going gets tough you don’t fold. We folded tonight to be honest. I’ve never been somebody who’s led a team that’s folded. I’ve never been accused of folding as a man, as a coach, that was a reflection of me tonight. I’m embarrassed. I can assure you, I can assure you, whether we’re making shots or not next Saturday or for the rest of the season, that other end of the floor will not be reflective of that. We won’t show that again.”

Rhode Island has a week off following the Dayton game, with their next matchup coming against the Fordham Rams at The Ryan Center on Saturday, Feb. 16.