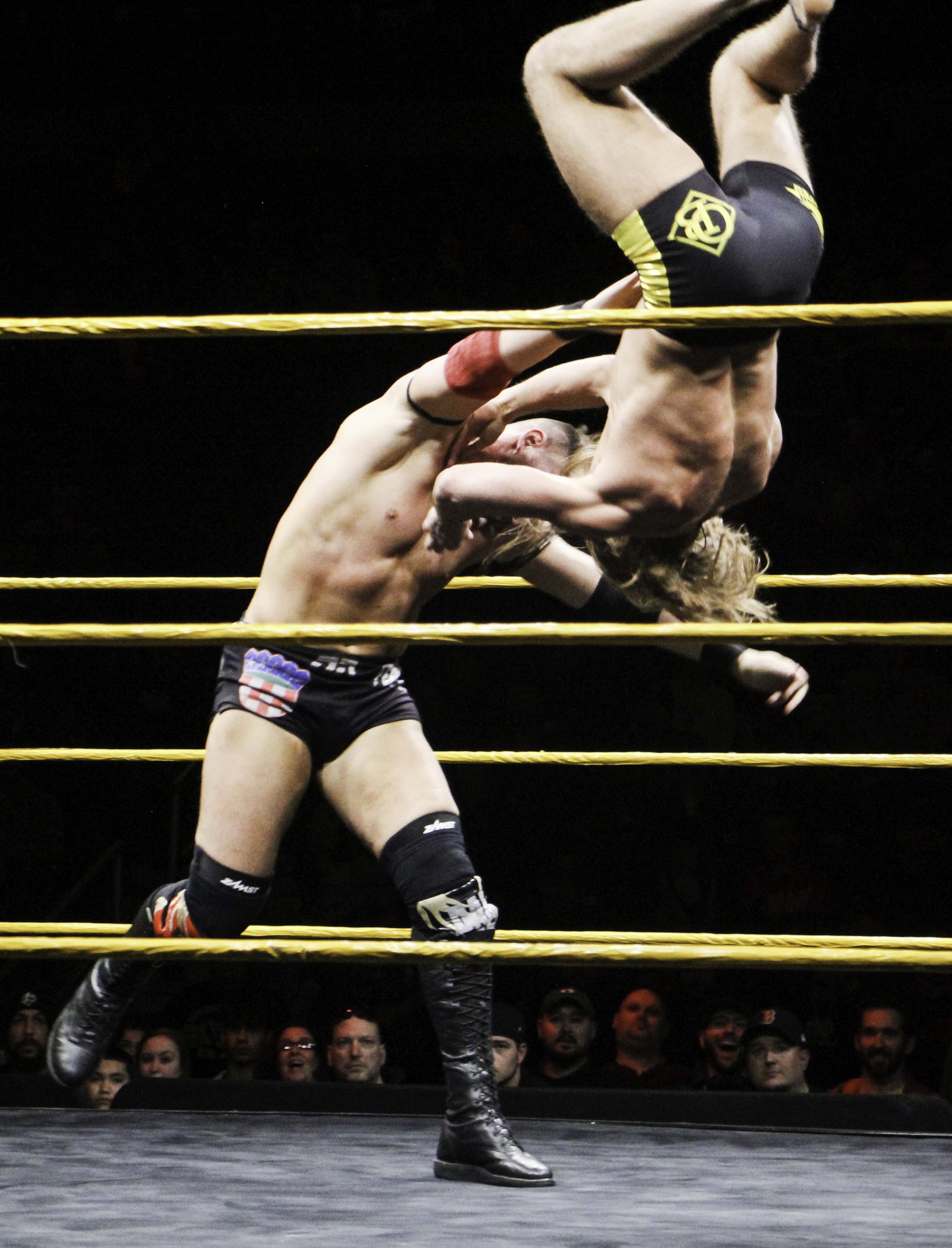 Performers squared off in the ring on Sunday night during the NXT Live Show. Photo by Greg Clark.

The University of Rhode Island’s Ryan Center hosted an NXT wrestling event this past weekend, making it the third time professional wrestling has come to campus.

NXT, a branch of the World Wrestling Entertainment brand, acts as a farm system for bigger branches like Smackdown and Raw. It is home to many up-and-coming wrestlers trying to become the next Dwayne “The Rock” Johnson.

The Ryan Center began its relationship with WWE NXT in 2016, when it hosted its first event in April of that year. Wrestling returned to URI the next year in September of 2017.

“The University tasks the Ryan Center with bringing unique and exciting entertainment for both URI students as well as the general public in South County and surrounding areas,” Erika Skubis, marketing manager for the Ryan Center, said.

With such a mission statement, professional wrestling seemed perfect.

“The Ryan Center hosted close to 2,500 WWE fans for our NXT Live show this past Sunday,” Skubis said, “a mix of both students and general public.”

The night saw many performers take to the ring to fight. This included a man dressed in slides and a snapback named Matt Riddle, “The Original Bro,” who sparred against Dominik Dijakovic. The sparr ended with the latter in a submission maneuver, where his only option was to tap out.

Additionally, a man named Kassius Ohno played the heel. In wrestling terms, that means a performer has the purpose of making the audience to hate him. He spoke for five minutes about his “wrestling genius” and how all anyone ever wants to talk about is how Matt Riddle beat him in six seconds at a previous event.

Ohno went on to challenge anyone to come out and face him. A fellow wrestler, Ricochet, took the challenge. Before he can even finish his entrance, Ohno kicked him to the ground. The referee breaks it up.

Ricochet regained some composure, despite now walking with a limp. The bell rang, signifying the start of the match. Instantly Ohno is pinned for the three count and he loses again in under six seconds. A fan yelled out, “You suck.”

“You suck,” became a chant. Ohno, at this point, grabs the microphone and yells, “I don’t suck, you suck!” The entire stadium erupted in laughter. Ohno left in a tantrum.

But the main event was the NXT North American Championship title match at the end between Johnny “Johnny Wrestling” Gargano, the reigning champion,  and “Velveteen Dream.”

The fight began with four to five minutes of each wrestler taking turns trying to get a bigger applause than the other, and mocking the fans who didn’t cheer for them. What followed was a series of twists and turns that causes excitement in the crowd. At one point Gargano knocked out the referee, a move that ended up helping him out, as Velveteen Dream pinned him for six seconds. But there was no ref to call the match.

Eventually a friend came out to help Gargano by taking the referees shirt and trying to call the match in Gargano’s favor. At the last second, however, a new referee ran into the frey and temporarily saves Velveteen Dream. But eventually Gargano pinned Velveteen, keeping his title safe.

But the fight wasn’t over. A friend of Velveteen ran out from backstage and tried to help Velveteen, which in turn drew Kassius back out, which in turn draws Matt Riddle, his enemy, out. Riddle knocked Kassius out immediately. This scared Gargano and all his allies backstage.

Velveteen and his good allies thanked everyone for coming and the audience came back into reality. It’s all a performance, scripted, a show. But it entertained.