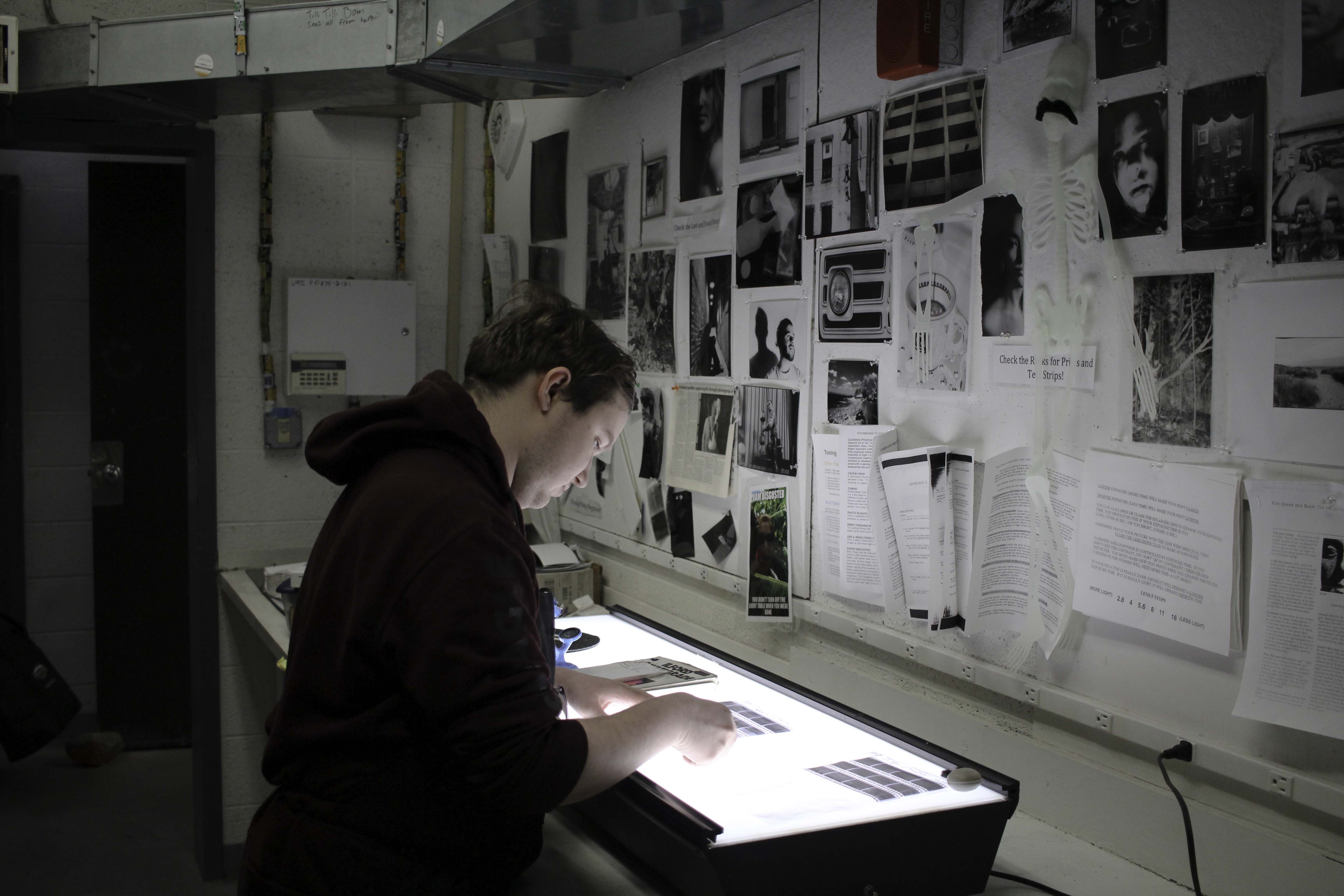 Zachary Clift studies negatives on a light table outside of the darkroom. Photo by Greg Clark.

In a largely digital age where cameras and phones can instantly process pictures, it seems as though traditional black and white photography is becoming irrelevant. However, students and professors claim this at the University of Rhode Island where it still remains a large part of the Fine Arts Department.

Within the maze of the URI Fine Arts Center a dimly-lit room, known as the darkroom, can be found. After walking through a near pitch-black tunnel, the room is revealed with its multiple enlargers that make the photos bigger along with chemical trays. It is here where students in the many different photography classes offered by URI including general education courses and digital photography learn how to process black and white pictures.

“In terms of learning if you aspire to be a photographer, I and other instructors that I have talked to believe even if you only ever do this once it makes you a better photographer,” Zoey Stites, URI’s main black and white photography professor said. “This process is so different and it is so limited, you only get so many shots, but I think that is actually one of the best things about it.”

The process with black and white images is tedious and long compared to the convenience of modern day digital cameras. After a picture is taken on film, it must be developed and then go through a lengthy process in the darkroom before it can even be seen to the human eye. The film is enlarged, then put into multiple chemical trays, and slowly the image appears on the film. There is no telling if the picture will be out of focus, or a perfect shot until this lengthy process is completed. However, despite it being much harder to produce than digital, black and white photography is not close to dead.

In class students are taught how to use the darkroom and are allowed to go work on pieces as they wish during certain posted hours. Professor Stites believes that learning the longer process of developing black and white photos will help students to be more precise in their professional careers.

“It is just a lot more interesting than doing digital,” first-year Student Karl Pfeil, who has Stites’ as a professor said. “With you don’t really know what your photo is going to look like until you develop them. It makes the photos a lot more rewarding.”

There simply is a special feeling when a picture is developed and comes out clear that most who have done black and white photography will agree too. She loves seeing the smiles on her student’s faces when they get a good picture to develop. Photography-loving students tend to enjoy black and white photography more than digital simply because it is focusing it on the basics of the art.