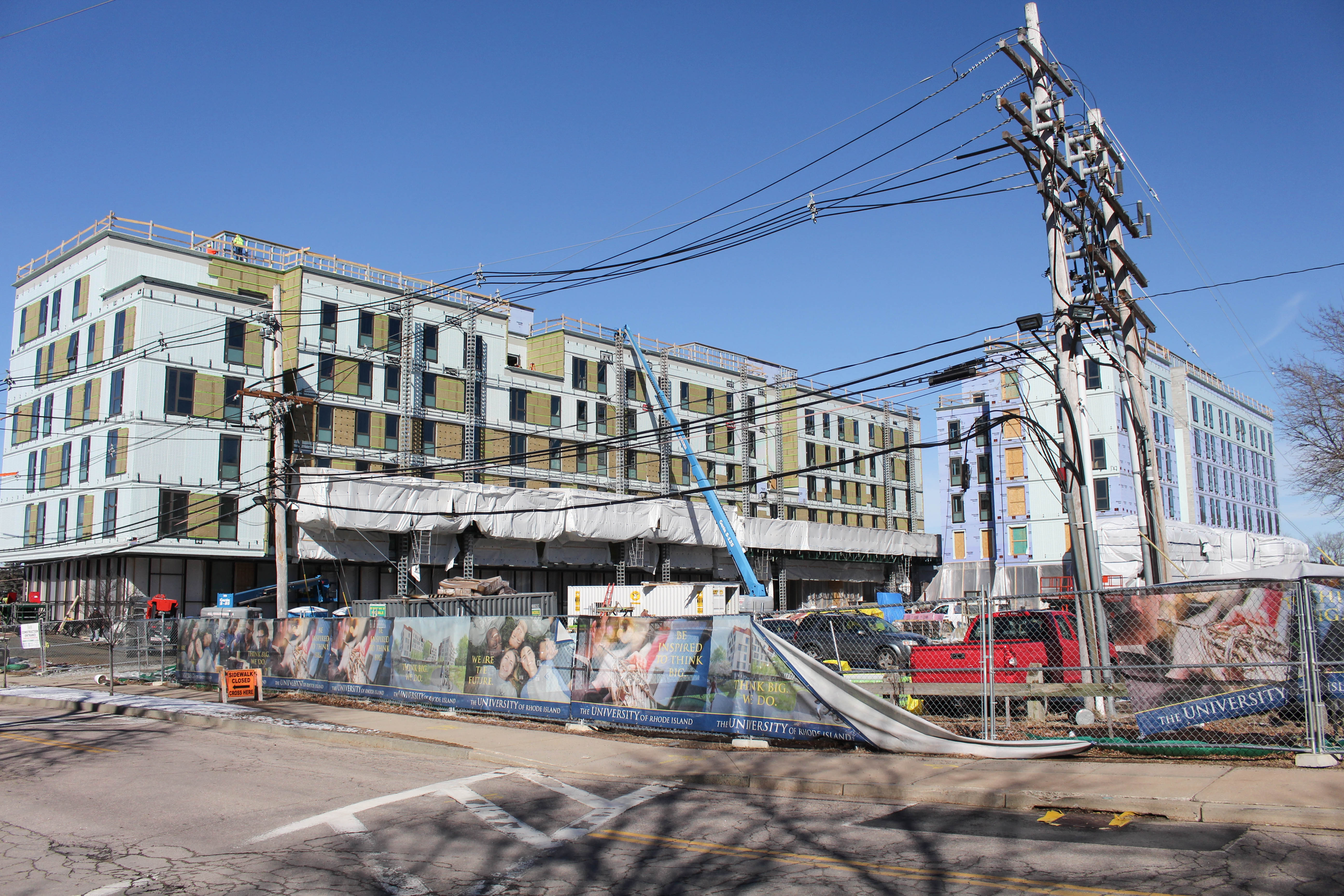 Brookside apartments were delayed by one semester due to mistakes from the architectural design firm and weather, according to URI’s Office of Capital Projects. Photo by James McIntosh.

The University of Rhode Island’s newest residence hall, the Brookside Apartment Complex, will no longer open in time for the fall 2019 semester due to an architectural error and difficult weather conditions, according to the University’s Office of Capital Projects.

The University has previously said on multiple occasions that the Brookside Apartment Complex would be open in time for the beginning of the upcoming academic school year.

Paul DePace, the director of URI Capital Projects, said the architectural firm that was hired by the University to design the Brookside Apartment Complex had an error in their design plan. However, this was not discovered until after construction was already underway on the building.

“Let’s be clear,” DePace said. “It was a design error on the part of the architect and their structural engineer. That has caused them to do some redesign and actually pull brick off of the building and reinstall some steel before the brick can be put back up. It was clearly an error on part of the design team and that has delayed us.”

The apartment complex consists of two seperate buildings. The brick was on the exterior of both builds, DePace said.

DePace said the University requires all design teams and contractors they work with to have error and omissions liability insurance. The University will file an insurance claim against Sasaki’s insurance, DePace said. It is not yet known how much money could be awarded.

Sasaki Associates Inc. could not be reached before the press deadline.

According to DePace, another issue that has delayed the opening of the apartment complex is the unusually wet fall and winter the state experienced. DePace said the buildings are wrapped in an air and vapor barrier (AVB) to prevent moisture from entering the building. However, construction crews were only able to wrap one of the two buildings.

“The northern building we can’t wrap, because it keeps getting wet,” DePace said. “You can’t put the AVB on while the surface is wet, because you’d trap the moisture in there and it could lead to mold growth. Starting in August, it rained every two or three days and we want the exterior to be dry for two or three days so we could then put the AVB on.”

The buildings did not have the AVB installed at the same time because of the construction timeline, according to DePace.

“The plan was to do things sequentially,” DePace said.

Numerous students expressed frustration that the apartments would not be opened on time. Some students had already decided that they would live in Brookside next academic year and are now forced to rethink their housing plans. Students made these decisions because the University confirmed in both May 2018 and September 2018 that the building would be completed for the fall 2019 semester.

“I heard there were four to a suite, and they don’t have that option [in Garrahy Hall or Wiley Hall] unless you’re with an RA, and I don’t have that many options of people to live with next year,” said junior Dijiorre Perez. “I’m upset.”

Other students were upset that the University waited until February to announce the apartments would not open on time because they would have found off-campus housing arrangements, had the University made this announcement sooner.

URI Junior Sabrina Ozuna said she would have looked for off-campus housing if the University had said from the beginning that Brookside would not be opened on time.

“I feel as if most options are already closed because [the leases] have been signed with many people,” Ozuna said. “It’s definitely going to be a little harder for me to find off-campus housing if I want to.”

Kathy Collins, the vice president of Student Affairs, said the University waited until they had all the facts in order to make a decision about whether or not the building would be opened on time. DePace said at the end of 2018, they still thought there was a chance the construction could be finished on time.

DePace said the decision was not made over winter break because they were still trying to determine the extent of the structural issue and determine a solution.

Ozuna said the University should find a way to open the apartments in time for the fall, because students were originally told that would happen.

“I really think they should have that ready, maybe if [the workers] do overtime for the weekend,” Ozuna said. “They really should of just opened it on time for those students. I made plans based on me thinking I was going to live there.”

DePace said the University had three options as to how to open the Brookside Apartment Complex following the discovery that construction would not be finished when planned.

The option which was the one chosen by the University was to delay the opening of the building until the spring semester of the following academic year.

Another option consisted of opening one of the two buildings for the fall semester. The smaller of the two buildings, which would hold approximately 200 students, would have been the one that opened on time. This option was not exercised because the University did not want students to be living in the construction zone of the adjacent building.

The final option consisted of opening both of the buildings for the fall semester, which would require construction crews to be compensated with a large amount of premium pay for off-shift and weekend hours. DePace said this would be a costly option for the University.

Collins also said that although this was a popular position amongst students, the cost would have been too high.

“To speed up anything on that building, it was going to be overtime,” Collins said. “All of that was going to raise the rent. Our decision making process was really based on putting the students first. I’m sorry if students don’t understand that, if that’s certainly not what they wanted to experience here, I’m very sorry about that.”

Additionally, the University was afraid to accelerate the construction speed because it could decrease the overall quality of the building, DePace said.

DePace and Collins said they were both disappointed the building won’t open on time, but believe it is in the best interest of the students.

“All expectations were [that] we would overcome this and complete the building, so that it could be open for students in the fall semester,” DePace said. “Getting to that point took us more time.”

According to DePace, the project should be substantially complete by October 2019. He said the building will be open in time for students to move in for the spring 2020 semester.

Housing and Residential Life could not be reached before the time of press regarding their plans on how to move students into the building in the middle of the academic year.